Write a Review
What did you think of the race? Share your thoughts! Write a Review
Stephanie Hoppe recommends this race
2017
"Run for the BQ" 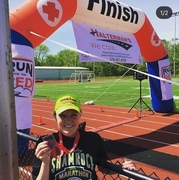 My goal for Spring 2017 was to obtain a Boston Qualifying marathon time. I registered for the Run for the Red marathon, my fourth stand-alone marathon, because the race met all of my criteria: race location (only a 45 minute drive – no hotel or air travel required!), course profile (net downhill), and time of year (late spring – cooler race day temperatures).

EXPO & SWAG:
The expo took place in Stroudsburg High School. It was easy to find parking at the school, and the expo had all of the essentials. It wasn't too snazzy, but had everything we needed. I was initially upset that my race finisher shirt was too big, but I was able to easily to switch to the correct size post-race. This is something I generally struggle with (shirts always seem to be way too large!), so I was thrilled that they helped me get the right size! The shirts for females also featured a cap-sleeve, which I thought was unique and an appreciated change from the normal short-sleeve finisher shirts.

PRE-RACE:
The pre-race accommodations for this race were great. Runners have full access to a high school, so we were warm and bathrooms were plentiful! Before the race, since I knew my only goal was only to BQ, I found the 3:35 pacer, and I immediately identified another group of girls who were also aiming to BQ. The pacers were nice, friendly, and welcoming and so were the other participants. In fact, I ended up running almost the entire marathon with a girl that I met at the starting line (which has NEVER happened to me before). I think that this is a testament to the friendly nature of the race and the participants.

RACE:
PRO: The course, although a net downhill, does feature some rolling hills towards the end. Initially I was concerned about these hills, but I found that they were so helpful for my quads! After the first downhill half, going slightly uphill for several portions ensured that I didn't burn out.
CON:My one caution with this course is that there were parts of the marathon that were a bit unnerving. The course was mostly on a 2-way mountain road, and only half of the road was closed off to traffic. That meant that there was only a line of traffic cones separating runners from oncoming traffic. Although I never felt like my life was in danger, there were a few crushed cones, which made me feel nervous at times.

POST-RACE:
The finish line was uniquely positioned on the Stroudsburg High School track, effectively transporting me back to where my love for running long distance began. As I entered the last 400 meters of the race, I found myself sprinting to the end, crossing the finish line in 3:30.10, with a PR and a BQ! I've never ended a road race on a track, and I thought that this was a really unique addition. And because the race ended on the track, runners congregated there post-race (even though official celebration tents were elsewhere). I also think it was nice for spectators to have access to bleachers to wait for their runners to cross the finish line.

OVERALL:
If you're looking for a fast marathon in late Spring, this is a great option. The race was well-organized, friendly, scenic, and best of all, afforded me with my much sought-after BQ!