Write a Review
What did you think of the race? Share your thoughts! Write a Review
Jocelyn recommends this race
2016
"Epic Event!" 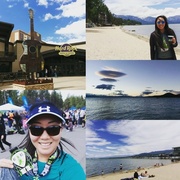 I think this was the second year this event has been put on and I can honestly say these race organizers definitely know what they are doing. For being a smaller race, they are extremely organized from sending out the pre-race e-mails, to the expo, to the day of the event.

The race is run along SH 50 from Spooner Summit to the Stateline in South Tahoe. There was a very limited amount of parking at Spooner Summit, so the race organizers set up a busing system to meet at the Hard Rock hotel and to drop off the runners at the top. Through e-mails and the expo, race participants could sign up for the buses. This race is also walker friendly and the walkers had a 7 AM start time, while runners had an 8 AM start time. I think this is due to the limited amount of time for the road closures, and although I was concerned about there being a lot of walkers to have to run through, most were pretty spread out over the course and moved over to the side to let the runners pass them.

The view of Lake Tahoe on this course was absolutely breathtaking! It was actually really hard to not stop and take pictures along the way. The first few miles of the course were downhill, but I was warned by previous runners to not take off in the beginning, as there are a few long hills in this course you don't want to be too gassed out for. Although the net elevation of the course lost about 800 feet, you are still starting at over 7000 feet and portions of the course were still decently challenging with long hills (you're running through the Sierra Nevadas). Also, a majority of the course had little to no shade cover, but the weather was pretty optimum on the day we ran. There were plenty of aid stations along the way, each having more than just water and energy drinks.

This event has one of the best post race parties I have ever been to. The post race event was a beach party that took place just down the street, and the race organizers set up buses to shuttle people back and forth between the Hard Rock hotel and the beach party. I wish I had more time to hang out, but I actually had to leave fairly quickly to catch a flight home that evening.

This race also had great swag. There were medals handed out at the end, a finisher's shirt, and a reusable Tahoe "solo" cup at the post race party. I would highly recommend this race! It was an amazing experience and Tahoe is one of my favorite places to visit.