Write a Review
What did you think of the race? Share your thoughts! Write a Review
John Niedzwiecki recommends this race
2017
"A Rocking View of the City" 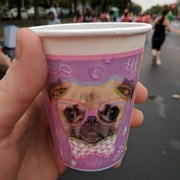 The expo was held at the Jacob K. Javits Convention Center (the same location as New York Comic Con). Location wise, it was pretty convenient for me coming from New Jersey. I was able to park in Weehawken and take the ferry to the Midtown stop which was right at the convention center. Unfortunately, this meant $26 in total to get to the expo ($8 parking + $9 ferry each way). I was able to easily get in and get right back to pick up my bib then t-shirt, no waiting. There was an area to change corral if you needed, a place to exchange shirts, and then a booth to sign up for runner tracking. As you exit this area you enter the official merchandise area, which felt a little lacking. There were several shirt designs and some generic Rock ’n’ Roll merchandise but it seemed small. There was also no official Brooks area, which I think was a part of the difference. My main experience has been with DC, where there is a lot of official Brooks gear for the race and a wall of shoes. I was really surprised to not see them at least there with the Rock ’n’ Roll themed shoes the released this year.

The convention itself was nice in that things were spread out instead of crammed together with no space to move. This was the result of having a fairly nice sized area, but also because of a seemingly lack of vendors. It felt small. Looking at the official vendor list, there were 25 vendors, but if you subtract the official Rock ’n’ Roll booths and information related ones, you’re left with about 20, which I honestly don’t remember that many. It was a little disappointing, maybe because I was just thinking “big city == big expo”. Overall, it was nice, but what I had heard from some other people there (Kim), it is still a smaller race as far as Rock ’n’ Roll goes. It was nice, just not what I was really expecting.

I did have one disappointment: the race shirt. While Rock ’n’ Roll does a great job theming the medals to the location of the race, they did not do that was the race shirt for Brooklyn. It was a generic guitar image in the middle, the only thing about it that was “Brooklyn” was the race city itself. They could have used the Arch from the race or even the Brooklyn Bridge, but the design to me just fell flat compared to DC’s design that had both the Lincoln Memorial and cherry blossoms on it. It just felt like a real opportunity missed and a little let down. I’m a person who actually does love to wear my race shirts, but I like when they have character to the race.

Race morning took some planning. I first needed to find parking in Brooklyn. The closest I could find was about 2 miles away. I did find a lot to reserve with SpotHero for only $11, but it warned of possible oversize charges for my vehicle, but I was willing to chance that for $11 NYC parking. It was also within a couple blocks of the 4 and 5 trains, which would run to Grand Army Plaza for the start line to take away my 2 mile pre-race hike. On a side note, it was really close to a 2 and 3 line but they weren’t running for construction. I’m very glad the Rock ’n’ Roll team had that noted at the expo to save me that trouble. All in all, my plan went well and I was aboard a train full of racers, and a handful of people who had to be wondering what was going on with their empty early AM train. The station let us out near the Soldiers’ and Sailors’ Arch which was where the start was, which was very cool to see first thing in the morning.

One thing different here from DC races was security, in that there was a security check point. It looked bad walking up to it, but moved very quickly through the medal detectors. For a second, the started to tell me I couldn’t take my Orange Mud pack in with me, but the realized it was my water and said it was fine. I’m sure there was a no backpack rule for good reason, but it seemed they made an exception for hydration.

The last pre-race piece to mention was the bathroom situation. It had one good piece and one bad piece. The good was that they essentially just had a wall of porta-potty lining the entire length of the corrals. This was nice because after the initial people all lined up at the beginning, there were plenty to choose from and get in line for. Plus it was also convenient to the corrals. However, it was set up like this: area on the left for walking down, metal barriers with signs denoting the corrals, on the the right was the corral area and then the far right were the bathrooms. This cause problems being able to figure out who was waiting for the bathroom and who was just waiting for the race to start. They should have put them on the non-corral side to make things less confusing. The number of bathrooms was great, but the organization of mixing it with the actual corrals was not. One small change, which I’ll be sure to give in my survey to them, and it would be greatly improved.

As I mentioned, you could have changed your corral as the expo to move up from your assigned corral if you thought you were going to run faster, but from what I heard, it was purely based on expected finish, so whatever you tell them is what they would say. However, just like DC, the corrals were “fluid” at best. They had the rails with the number signs, but that was it. There was no division, no ropes between, nothing. The most you had was someone holding a sign with the number on as we moved forward. I was assigned corral 16, but went further up to use a bathroom (because of the crowding at the entrance I mentioned) and then only really got back to about 14 before it wasn’t worth the effort. Then, when I moved with the people around me, somehow I ended up crossing the line with corral 12?! It was really just move up together and then run when they said go. In the end, it didn’t really matter, but I didn’t intend to jump forward 4 corrals, it just happened in the “fluid” corrals.

The race itself was pretty nice. It had an initial out and back of a mile, which was nice because it meant you got the early crowds twice, and then a longer out and back which eventually lead to the park. I have to say the choice of bands, especially early was interesting. I love a good mix of music genres (seriously, you just need to see my Spotify) but going in, you’d think Rock ’n’ Roll might have a bit of guitars and some rocking sound. The first three groups were a folk band (banjo and washboard) and then two brass groups. Now, all were good, just not exactly rock and roll. Entertainment wise, you also had some local marching bands and drum lines, which I like because I was / am a band geek, but they’re only high schoolers. They need to be early on the course because by the time my plodding self gets to them, they’re not interested or able to play and more. They’re worn out. There was one in particular that was on the long out and back and neither time were they playing as I went by. There was some really good entertainment though, don’t get me wrong. There were a couple that were enough to make me take a 30 second break just to listen a little more to them. There was also a lot more than DC had, which was my critique there. I just had bad luck in that I went by several not playing (but not that I expect them to play for 3 hours straight either).

The course was nice, mostly flat, with the city to see. It was cool, but nothing exceptional. It’s not that you went by a lot of sites to see, but there was a lot of the city character to see, which I enjoyed as I’ve spent time in NYC but never Brooklyn. I was very impressed with the number of water stops on the course. I always carry my own Nuun with me because I want the electrolytes and the flavor but also because I like to have some between stops and not be dependent solely on them. I found I drank a lot less of my bottles than I usually do because of the sheer number of stops they had on course. This was also really welcomes because while the temperature was nice, it was humid and sticky. The race ends in Prospect park, which a couple mile loop around the outer edge. By this point my right foot had been hurting and was causing some issues with my stride so I was taking it easier. The park was a nice change and cool to look at with all that was going on for a Saturday morning. The only unhappy part was seeing a sign saying “Specialty Bike Route. Last Exit before steep hill”. Not what I like seeing before the last 2 miles. As much as the hill sucked, you then slowly rolled your way down into the park for a nice finish. I was able to push through and was happy to finish.

The post race party was nice because it was held in the park so they had plenty of room. They also had the food all in a bad ready to go for you with a protein bar, gummies, chips, Gatorade (Team Nuun, did not drink), and boxed (yes boxed) water. They also had bananas and chocolate milk separate. I got to see the headliners sing a couple of songs and get my free beer. Michelob Ultra may not be my beer of choice, but I appreciated the “Run Done Beer Now” custom can. There were also number of tents set up: medical, merchandise, information, baggage collect. After my beer I decided to head out, which unfortunately was like another mile out of the park just to get to the start line for the nearest subway station. I did stop for two slices of NY style on my walk to the car, which was a fantastic post race fuel.

I always wanted to run in NYC and now I have. I enjoyed it. There definitely is room to improve and grow, but I enjoyed it overall. In and out of NYC was a bit of a pain for the expo and race, but that was because I was staying for free in NJ as opposed to having a hotel in NYC, so that really is just a push and a choice I made. The race itself had a good course, great aid, and was a fun time even with the ending hill. Overall, would run again.