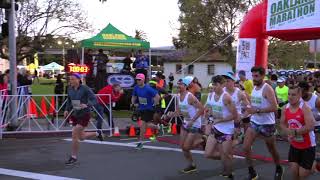 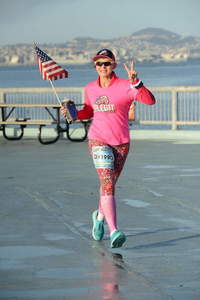 There are big things to come for the 2019 Oakland Running Festival! Not only is it the 10th Anniversary of the event, but we will also be the first Marathon to run over the Bay Bridge! Experience Oakland’s diversity and beauty with a race that touches all aspects of Oaktown, and finishes with one hella awesome party. Come help us celebrate 10 years in Oakland!

What did you think of the race? Share your thoughts! Write a Review
Brittany Jackson recommends this race
2019
"5k/Half Challenge "

This race was one of the better ones that I have done when it comes to completing a challenge. I opted to run the 5k then the half marathon immediately after (was about an hour in between for me). It was a lot of miles, but I would do it all over again, and plan on returning next year!

The expo was GREAT! I was able to find parking close, and get straight in. I came at the tail end of it on Saturday. There were a number of different vendors and lots of free goodies! I was relieved that the staff and volunteers were pleasant and helpful despite it being close to closing time. My mom and I made our way around after picking up our shirts and bib.

Race day…the shuttles are probably my only disappointment about the race. We stated right across the street from where the shuttles were picking up so it made it super easy to get to the race. Unfortunately the shuttles were running about 45 minutes apart and once we boarded the driver had no idea how to get to the race due to the road closures. In my mind I was thinking “how did they not provide a map to the driver”. Runners who were running the full marathon ended up being late due to the lack of planning. Thankfully my race started a little later so I was able to make it on time.

Both of my races were great! Despite my lack of training and the extra miles from doing combined races I managed to let the road carry me right along.

The 5k started right on time and mom and I walked it together. There were a lot of runners but also a lot of walkers. I love that the race catered to both! The course starts off going around the lake. It’s a really pretty way to kick of the start and the course went all the way around in a loop so we got to enjoy the views for most of the race. The course was mild and not to challenging, a couple hills at the end but nothing too bad. One thing I was very excited about was all of the photographers along the course. Usually you only see one or two; there were about three or four. The finish line was well equipped with snacks as we came through to grab out medals. Which leads me to my next favorite thing, the medals? For a 5k it was a nice size and we got the claim the 10 year anniversary medal so it was extra special.

After we did the 5k I rested for about 45 minutes and headed to the start for my half marathon. There were a lot more people running the half than I expected, but it was a good thing. With being a little slower I love having other runners around along the race. The course was pretty flat for the most part. The first three miles went by so fast! They had super neat graffiti like mile markers so it was something to look forward to get to the next one. Throughout the course all the way up to the finish there was neat murals and things to look at as we ran through the city. The cheer stations were fun and the aid stations were ready for us runners as we came though. The course was marked properly and I have zero complaints about the half marathon. Same as the 5k the finish line was fully stocked and refreshing as I come through to grab my medal(s). That’s right! I earned three medals! All of which were well worth the miles!

All around this race was great once we got past the shuttle ordeal. The weather was great and made for a wonderful race morning and afternoon. I would recommend the Oakland Running Festival for runners and walkers of all ages, there is a race for everyone at this event! I cannot wait to return next year!! Thanks BibRave for allowing me to be a part of such an amazing event!