Write a Review
What did you think of the race? Share your thoughts! Write a Review
Heather recommends this race
2017
"Tough race day, but great race" 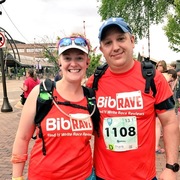 The 24th North Shore Classic took place on Sunday, June 4, 2017. It starts and finishes near St. Johns Ave and Central Ave in downtown Highland Park (start and finish lines are different, but same street). The 5k started at 7:00am and the half marathon began at 7:30am. The announcer said there were about 1,000 runners for this event. Starting temps were about 71 with 75% humidity and finishing temps for me was about 83 or so. Felt like 100, no joke. My Garmin says it was 95 at the finish... I'm inclined to believe that.

PROS:
+ Packet pickup on multiple days and a friend can pick up for you – all they need is your QR code. Fleet Feet Old Town on Thursday 3–8, Fleet Feet Deerfield Friday 2–6pm, and Saturday from 10am–6pm. Option to get your packet mailed for $15 up to three weeks before the event (easily done in your enmotive account). A friend picked mine up and it sounded like it was quick and painless.
+ Goody bag was an summer ombre tank top (green for women, blue for men). Nice feeling material.
+ Parking is free and plentiful near the race start. A map of parking lots and garages could be found on the website in the participant guide. As someone with anxiety about parking, I find this very helpful.
+ 5k at 7am was corrals A and B, 7:30am half marathon was corrals C–G with corrals being released about 3–4 minutes apart.
+ A good amount of portapotties set up near the race start. Lines were a little long, but generally not too bad.
+ Course is well marked and plenty of policemen and volunteers out there to keep us safe, as a lot of the course was still open to traffic.
+ Very scenic. I love running through the neighborhoods, Ravinia area, Fort Sheridan.
+ Plenty of aid stations with Nuun and water, well-staffed with volunteers (aid station mile 7 even had Munchkins, and even though it was super hot out, I ate one).
+ Around mile 10, volunteers were handing out bottled water and wet towels. Thankful for that. Most of that water was dumped on my head, legs, and arms to help cool me down.
+ Mile markers each mile and clocks (at each one I think).
+ Lots of CES pacers - near me were the 13 and 14 mm. They were encouraging and friendly.
+ Half marathoners received a hefty medal.
+ Post race goodies included bottled water, icy cold towel, banana, and a bag filled with: chocolate Silk soy milk, mini pretzels, Cliff Bar, and a mini Rice Krispy treat.
+ It was really hot out that day (80s and sunny even though initially it was supposed to be overcast), so they were allowing half marathoners to drop down to the 5k. Also near mile 9, a volunteer was telling runners that the next part of the course was an out and back of 3 miles, and if we wanted, could go straight to mile 12 instead of doing the next 3 miles. A lot of people were suffering in the heat/sun, so I think that was a good call on their part. I think most ran the whole thing, but I'm sure a few might have taken the short cut. I almost regretted my decision when we started going out – the sun was brutal – but I wanted to do the whole 13.1, and I did finish under the 15mm pace, so all was good.
+ Some neighbors had out sprinklers and hoses for the runners to go through - THANK YOU!
+ Post-race fans/misters. I could have stood there for 20 minutes haha.
+ From the sounds of it, plenty of runners were dehydrated or needed to get treated for being overheated, but race and medical staff handled it all quickly and efficiently.

CONS:
I can't really think of any for this race. Yay!

OTHER:
• Be prepared for hills. It's not crazy hilly, but plenty of rolling hills on course, making it tough if you aren't prepared, or at least mentally challenging if you don't know about it. The major hill to be concerned with is right before mile 7. You get a great downhill, but then pretty much immediately turn left and head up. It's a long, steep incline. For me, that meant a long walk up haha. Overall elevation gain according to my watch was 495. Again, not crazy, but don't go in thinking it's flat ;)

I've really enjoyed this race (despite the heat) the past two years and will keep running it yearly if I can.