Write a Review
What did you think of the race? Share your thoughts! Write a Review
Henry Lato recommends this race
2019
"North Shore Classic Half Marathon " 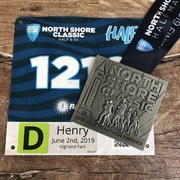 The North Shore Classic Half Marathon was a great way to kick off the summer running season. Located in Highland Park IL, this was a great race located in on a great neighborhood with allot of support by its community. The race benefited Camp One Step which provides kids with pediatric cancer a chance to go to summer camp.

Packet Pickup:
I picked up my packet at Fleet Feet Deerfield. I picked it up the day before expecting a line out the door but I was pleasantly surprised. Saturday’s Packet Pickup was fast and easy. There was a bit of a line but thanks to the kind and helpful volunteers and staff it moved quickly. At Packet Pickup I received an North Shore Classic sleeveless tech tee shirt as well as my race bib. Overall Packet Pickup was well organized, fast, and easy.

Pre Race:
I arrived at the race at around 6:30 (1 hour before start time). I decided to get in the bathroom line when I got there thinking that it would get crazy long. The problem was that the 5k runners were starting at 7 so the bathroom lines were still crazy long. After waiting in line for the bathroom we stayed on the side and watched the 5k runners start. At this time we were not able to go in the corrals yet because it was 5k only. It got a little crowded as all the half marathon runners were waiting to get in the corals. After the 5k kicked off, I stretched and warmed up. Then had a sip of Nuun Hydration to stay hydrated. Then we were able to access our corral and get ready for the start of the race.

The race:
It was perfect running weather! It was about 58° and sunny. When the race started we started going downhill but had to come back up almost immediately. That happened almost the whole race. There is one thing you need to know before you do this race. IT IS HILLY! At about mile 7 you go down a very big hill towards the beach. Then you have to climb an even bigger hill. The course had excellent scenery. It went though the neighborhoods of Highland Park, by the beach and though fort Sheridan. The course was aligned with people at all 13.1 miles which made the race even more special. There were also many aid stations with Nuun Hydration and water which were in a good location, well staffed, and well organized. The race finished a few hundred yards away from where we started a was filled with even more people cheering you on to the finish.

Post Race:
After finishing you were given your North Shore Classic medal to celebrate your accomplishment. You were also given water, goodie bag with a Honey Stinger waffles, chocolate milk, a banana and other post race snacks. After the race you were escorted to the post race party. The post race party had many vendors, music, and an area to stretch and ice after your big 13.1 mile run.

Overall The North Shore Classic Half Marathon was a great hilly race with a great cause and allot of support by the community. It is a Chicago tradition and will definitely be back next year!