Write a Review
What did you think of the race? Share your thoughts! Write a Review
Tom recommends this race
2015
"A Marathon Runs Through It" 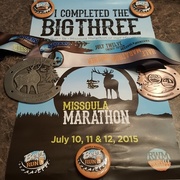 When it comes to places to travel to see pure natural beauty and amazing scenery, it's hard to beat the Western United States. Don't get me wrong - there are plenty of other beautiful areas around the world. The thing is that very few of them are so expansive (hundreds of miles of mountains and valleys in every direction). And even fewer are home to such laid back, friendly people. This year, I'm fortunate enough to be able to do four races out west, one of which was the Missoula Half Marathon.

Olympian Runner Jeff Galloway has had a partnership with the race organizers for several years. He's involved in a number of different events throughout the weekend. This year he hosted a hike up to the M on Mount Sentinel on Friday morning, had a meet and greet / book signing and running clinic at the race expo on Saturday, ran the marathon on Sunday morning, and celebrated his 70th birthday and 200th marathon on Sunday evening. There were plenty of opportunities for runners to talk to him and get autographs and photos.

On Friday night, runners gathered at the Holiday Inn at 6:00 pm to kick off the weekend with the Missoula Beer Run. The Beer Run is a fun run through part of downtown Missoula, along the Clark Fork River and through part of the University of Montana campus. Runners have the option of doing either a three mile or five mile loop.

This is truly a fun run - there's no registration, no official timing, no race numbers, and no finisher's medals. If you want to do the run, you simply show up and join in. There are about a dozen tour guides who do the run as well. They're ready to answer any questions that runners from out of town have about local plants and animals, historic landmarks and university buildings.

The Beer Run was a lot of fun and it also had a great turnout. Runners who finished it got bottle openers. There were also Missoula Beer Run shirts and beer glasses for sale at a merchandise table inside of the Holiday Inn lobby. After the run, there's a party where runners can get food and locally brewed craft beer from Big Sky Brewing Company. Anyone that's planning on participating in the 5K on Saturday morning can also pick up their shirt and race number at the post run party.

The 5K starts at 8:00 am in downtown Missoula on Saturday morning. Runners who weren't able to pick up their race packets at the Beer Run the night before can pick them up on race morning. The start line is right outside of the Wilma Theater. The course starts on a bridge that crosses over the Clark Fork River. Most of the first mile goes through some local neighborhoods and the rest of the course runs alongside the river. The finish line is in Caras Park, which is a city park in downtown Missoula.

As far as 5Ks go, I have to say that this is probably the most scenic one I've ever done. The riverside trail is a lot of fun to run on and the views are spectacular. It rained a little bit during race morning but that wasn't enough to ruin the fun. The 5K finisher's medals are also amazing. This medal is actually nicer than some of the half marathon medals that I've gotten in other cities.

The race expo is also in Caras Park, so runners who do the 5K can pick up their marathon or half marathon packet right after crossing the finish line. I have to say that as far as race organization goes, this is one of the most convenient systems I've seen - for three days in a row, you can do a race and then get everything you need for the next one on your way out. The expo is all day on Saturday, so runners who aren't able to do all three events (or don't want to) have plenty of other packet pickup options. There's even an option to email the race organizers and ask to pick up your marathon or half marathon packet at the airport if your flight isn't going to arrive in time for you to make it to the race expo.

Both the marathon and half marathon courses are out-and-back courses that start near the base of the mountains and head towards the city, finishing downtown. The two courses start in separate locations but meet up around mile 16 (marathon) / mile 3 (half) and go the rest of the way to the finish line together.

The logistics for out and back courses are always a lot more difficult than they are for looped courses but the Missoula Marathon Race Organizers have a pretty good system set up for this one. On race morning, there's no parking at the start lines, but that's fine since it really makes more sense to park closer to the finish line anyway. The university parking lot is open and has plenty of parking spots available. There are shuttle buses that will take runners from there to the start lines. The university is about a mile from the finish line though, so another option is for runners to park along the streets or in the parking garages in downtown Missoula to avoid having to walk so far to get hack to their cars after the race. Honestly though, my suggestion is to stay in one of the downtown Missoula hotels. If you do that you might not need to worry about driving or parking at all for the entire weekend.

As far as the shuttle buses go, there were plenty of them and while the lines appeared to be long when I got there, I only actually stood in line for about 15 minutes before I was able to get on a bus. That said though, the race organizers did recommend getting there as early as possible to make sure you get to the start line in time.

The marathon and half marathon both start at 6:00 am. The reason for the early start is because it's usually really hot in Missoula in July. The race organizers want to make sure as many runners as possible make it across the finish line before the sun comes out and the temperature starts to warm up too much.

This year the weather was fine. Better than fine, in fact - it was as perfect as it could be for a race out West in the middle of July. When I got to Missoula on Friday, the temperature was in the 90's, but after a few storms passed through the area on Saturday, it had dropped to the mid 60's by race morning. There was still some rain in the area on race day along with a little bit of drizzle during the race but the rain actually felt refreshing. I heard a couple people say that it was humid... but compared to Chicago, the humidity in Missoula was barely noticeable to me.

Both courses are mostly flat although the marathon does have a hill around the halfway point. The half marathon starts uphill but the course goes downhill pretty quickly and the hills on the rest of the course are negligible. The elevation is mildly challenging (3600 feet), but compared to Zion Canyon (5000 feet) and Grand Teton (6000 feet), I didn't think it was that bad.

A few other course highlights:

<ul><li>A cannon fires to start both races.
</li><li>The Marathon starts further back at the Clark Valley Fork Bank and most of the first half runs alongside the river and through some of the local forests.
</li><li>The Half Marathon starts at the Maclay Bridge and runs alongside the river for several miles and offers spectacular views of the mountains.
Parts of the course go through Lolo National Forest. I saw a pair of deer around mile 7. I've heard that it's not uncommon to also see moose and elk from time to time as well.
</li><li>Other parts of the course go through farmland so runners will also see a lot of open areas along with other animals like horses and cows.
</li><li>Around mile 4/16, a man in a tuxedo plays Chariots of Fire on a Grand Piano in his front lawn for runners passing by.
</li><li>There isn't a lot of crowd support at the beginning of the race... but that's perfect since that part of the course mainly runs through the forest alongside the river. Runners can enjoy the scenery and the zen feeling that comes with running through an area like that. As the course gets closer to downtown Missoula, the crowds get continually larger and by the end of the race, the are hundreds of spectators waiting near the finish line to cheer everyone on.
</li><li>After the race, there's a big post race party in Caras Park. There's free food, free beer, results, and race merchandise. Anyone who participated in all three running events throughout the weekend can also get a commemorative race poster.
</li></ul>

I tried to come up with some cons about this race, but I really couldn't come up with anything. The race is a lot of fun, the courses are beautiful, the medals are awesome, and Missoula is a great location for a run. If you ever have an opportunity to do this race, don't pass it up.

If you'd like more information about this race or about other things to do in Missoula, you can find some additional details <a href="http://www.runsandplaces.com/2015/07/race-recap-missoula-half-marathon/">here</a>.