Write a Review
What did you think of the race? Share your thoughts! Write a Review
Heather recommends this race
2016
"Challenging course, beautiful scenery, and great support!" 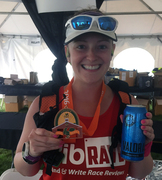 The 6th Annual Mad Marathon (or the Mad Half, which is what I ran), was held on Sunday, July 10, 2016. This race is truly a wonderful experience. The weather was in the mid-50s to low-60s, overcast (loved) with 95% humidity, and some sprinkles early on in the race, and depending on how long you were out there, some downpours too. At mile 12 we hit the downpour, but I was so sweaty anyway, it actually felt really good to run in it (another thing to stand around listening to awards and grabbing our beer post-race in wet clothes... a little chilly). These are my opinions of Pros, Cons, and Other from the race. 7am race start for half, full, and relay.

CONS:
- Honeslty - no cons! Great race. A few notes in the Other section that I don't consider cons, just indifferent type of info.
+ Course was clearly marked and was easy to know which was to go if you were full or half. Plenty of signage, cones, and course marshals to help point you in the correct direction.

OTHER:
• There were approximately 350 marathon runners, 400 half marathoners, 4 teams in the 3-person relays, 15 teams in the 5-person relay, 11 walkers for the half marathon, and 16 teams in the relay half marathon relay. So the race was under 1,000 participants total. Small from what I'm used to, but I really liked that.
• Again, coming from big city races where I had just completed a 5k with 6,000 people, I felt like a fish out of water, looking for the smallest of details so I could prepare and not be anxious of the unknown (like parking) or how many aid stations for the half (I carried my own anyway, so then it didn't matter... but might not have brought it if I knew how many to expect), I can't think of any other cons. I was able to learn more about parking from the packet pickup volunteers as well as in the race booklet, so that was cool. Back home we are used to receiving race-week emails with info like what you need for packet pickup (oftentimes a print out or you have to look up your bib ahead of time), and getting details about parking and costs. A race like this doesn't need to send out this info, because it's easy peasy, I just didn't know it until arriving haha.
• Mile markers at every mile, and would say 'Mad Half' or 'Mad Marathon' depending what mile it was marking.

I don't think there are any cons to this race. All of the runners are friendly and encouraging, it was well organized, laid back atmosphere, great swag and post-race treats. I'd really love to go back again next year, and maybe even conquer the elevation of the marathon (can someone tell me what the elevation gain for that one is?!)! It would be a fun challenge. I had an amazing time, being relaxed and taking tons of photos. I was actually even able to eat a bagel pre-race, which is something I have trouble doing usually (eating). Also, such great food and beer in Vermont... I need to come back to experience more! I'm sure I'm missing some details, but I'll add in if I think of more awesomeness :)

Definitely do this race if you have the chance! For those looking to do 50 half or full marathons in 50 states, choose this one! I had some friends that also ran a race in Portland, Maine the day before (made all the easier by being able to pick up their bibs on race morning for the Mad Half), so if it's the same weekend again, you can knock two off in one weekend! And you know I'm happy when good craft beer is involved with a race - especially if it's local to the area.