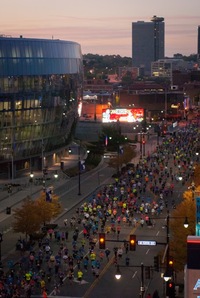 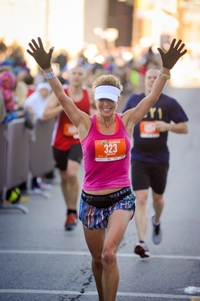 Write a Review
What did you think of the race? Share your thoughts! Write a Review
Lindsey McRoberts recommends this race
2020
"Great swag, Great communication"

This would have been my 5th year running the Garmin Kansas City Marathon events — 4th time running the half marathon. And this year was going to be the last year of that amazing downhill finish…if you have run it, YOU KNOW!

The Garmin Kansas City Marathon cancelled their in-person event early in September but that didn’t stop me from running it VIRTUALLY.

**packet pick up + swag — Unlike other events, there were 2 opportunities to pick up my Kansas City Half Marathon swag — (1) in person on a specific weekend or (2) shipped anywhere.

I thought the in-person pick up was on Friday and Saturday, October 16th/17th (to which I went to the event space on Saturday) but found out it was only on Friday, October 16th. Since I missed the in-person event, I reached out to the RDs about the mixup and they were able to move my name to the “ship” list.

As with most virtual events, there is some pretty great swag to entice runners to participate. For anyone signing up after October 5th, their swag will be shipped in December once the challenge timeframe has expired :

**the course + aid station + port-a-potty — I decided to utilize a rough 4-mile loop I have run/walked frequently. The plan was that I would run 3 loops and use my house as my aid station and port-a-potty.

One of my hometown 4+ mile loops worked well for the Virtual Kansas City Half Marathon. Being a virtual event, I had the ability to plan all the aspects of the event — the race day, start time, course design, aid station location, food/drink availability, bathroom stops, and post-race amenities.

I planned on running the virtual Kansas City Half Marathon the same weekend it was going to be in person — October 17th. But then I decided I was going to run the event before I went to KC for the packet pick-up, I changed my “race day” to Friday, October 16th so I could relax over the weekend.

I planned on starting EARLY in the day, but I didn’t end up getting out until nearly noon…but I made it work! The swag is great and the RD kept in touch as plans changed.