Write a Review
What did you think of the race? Share your thoughts! Write a Review
Jen recommends this race
2016
"2 days, 3 races, 5 medals!" 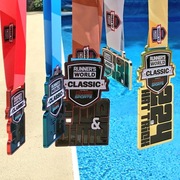 In its inaugural year, the Runner’s World Classic featured a 5k and 10k on Saturday (paired together as the “Five & Dime”) and a half marathon on Sunday. Run all three races and you complete the “Hat Trick.”

Registration: Online registration was a breeze. No issues.

Swag: The only thing you got when picking up your numbers was a bright blue cotton t-shirt with the Runner’s World Classic logo on the front and a whole lot of sponsor logos on the back. I rarely wear cotton t-shirts but it was nice they had gender specific sizes.

Parking: Since the race took place at a college, there was plenty of parking. There were a lot of volunteers directing traffic and acted as a well oiled machine. I have to give a shout out to the police officers that broke into a car after the 10k on Saturday to rescue a poor pup left in a white SUV. Seriously, who would do that—it still pisses me off to think some dog owners out there would think that was ok.

Bathroom Situation: Decent amount of porta potties. Never had to wait too long. They did run out of toilet paper on Saturday after the 10k BUT I noticed a ton of extra rolls in each on Sunday.

Start Line: Runners lined up by predicted race pace for each race. The road was pretty narrow and the pace times were super close together. We were kind of late to the 10k and there was no way to get any closer so we lined up in the way back. Also, a HUGE pet peeve of mine—there were 2 boys on scooters at the start of the 10k! How did race officials not see them?

5k Course: The 5k course was fairly flat compared to the other races and went through mostly shady neighborhoods. It was a big loop course and actually pretty boring and I thought we would be running more through campus—but it was a super small school so they did what they could!

10k Course: The thing that sticks out most was the epic hill at mile 3. The combination of heat, humidity and that giant hill killed me BUT there was a pretty long downhill towards the end of the race to make up for it.

Half Marathon Course: Holy hills! I wasn’t really prepared for the rolling hills of North Andover. Most of the course was through neighborhoods with a fun little stretch through the center of town. We revisited the 10k hill around mile 5 and after that is was up and down, up and down. Definitely a challenge for me. If you look at my race review history, I tent to choose the flat courses. :)

The Bling: For the weekend of races, I earned 5 medals! FIVE! If medals are your thing, these are pretty cool.

Weather: It was what you would expect for July! Hot, humid and poor air quality. The 10k was the toughest because it started at 8:30am vs. 7am for the 5k and half.

Course Support: Aid stations were there when I needed them. Medical staff were all over the course—especially during the half marathon. All the volunteers were friendly and some were even singing to us!

Food: Water only on Saturday (although there was an orange juice sponsor!) and both water and Gatorade on Sunday. Basic post-race food choices. Bars, chips, etc. I would have liked to have some fruit. Seeing yogurt was weird. I was skeptical since it was so hot. Yasso was a sponsor and those tasted good, as usual, but again—no fruity Yasso choices!

Other: MarathonFoto was all over the race course taking pictures. I am not usually one to but race photos unless it’s a big race of huge importance to me but they separated the races on MarathonFoto as Saturday and Sunday so if you wanted to “Buy All” you had to pay $59.95 for each day’s worth of pictures.