Write a Review
What did you think of the race? Share your thoughts! Write a Review
Kristen recommends this race
2014
"Fun, fast, and a great value for a race!" 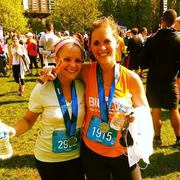 The Chicago Spring Half Marathon is a small race (around 2,000 for the half and 5,000 for the 10K) in May. The race started along the lake at Southwater (near the park at Lakeshore East), and it was a flat, fast out and back course. When I say fast, I mean it- the course is perfect for people looking to PR, and the results from this year were way speedier than other bigger half marathons.

Best things about this race:
-I loved the post-race festival! For a cheap half (I think I paid around $65 when I signed up in January), there was a LOT to do. You could arrange and plant flowers (random, but so pretty!), get a post-race massage (the lines were LONG but that's understandable!), and best of all, Goose Island catered a fabulous breakfast buffet that was free for race participants. Eggs, potatoes, pancakes, and watermelon- amazing, and definitely what I needed after 13.1!
-The swag: Nice looking light green tech t-shirt with the Chicago skyline running sideways down the back.
-The medal: I'm not big on medals, but this one had a Chicago-light blue ribbon and the medal had the Chicago star emblem. Nice, heavy weight to it too!
-The weather: Okay, so the race directors had nothing to do with this, but it was a perfect day for running!
-Fast lines: There were lines for gear check before and after the race, and at the results tent, but they moved quickly.
-End of the course: We ran right on the water and there was way more room to spread out!

Things that weren't so awesome:
-Lakefront trail crowding: The parts of the lakefront trail where it's only a two mile lane got very crowded at the beginning of the race and near the turnaround point. Also, early on in the race, a rollerblader was rollerblading against the tide of runners down the path- could have been really dangerous.
-Food immediately after finish: There were 3-4 kinds of bars to choose from, plus water and gatorade- I would have preferred 1-2 bar options and then a banana or bagel for some real food.
-Tricky dropoff: My friend and I took an Uber to the race, and we had a hard time figuring out where to get dropped off and where to go once the cab did let us off.

I really think this race is a great value for a half marathon- a great race to kick off summer in Chicago!

I only ran this race because my whole training group was running. I had a half marathon the follo...