Write a Review
What did you think of the race? Share your thoughts! Write a Review
Jocelyn recommends this race
2016
"Miller Park Fun!" 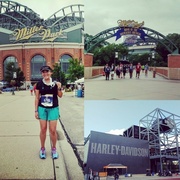 This was my first run in Wisconsin, and it was definitely a splendid race! Overall, the race was very well organized with lots of e-mails and information blasts on packet pickup, parking, course updates, and the finish line party. To start, the t-shirt was nice (typical technical tee) with the name of the run, and additional swag was given at packet pickup including a bobble-head and some other small items from local vendors. It wasn't really an expo, as there was only a few sponsors from the event there, but the store for the Brewers was open where you could purchase fan items there. Packet pickup took place in the Skyy lounge at Miller Park.

Getting to the start line was fairly easy, I ubered to the race, and just walked over to the start line. There were multiple volunteers and cones marking a path to clearly lead you to gear check and the start line. The weather was overcast for the run, and sprinkled slightly, but I would say it was pretty optimum conditions for running in the midwest at the end of the summer/beginning of the fall time. The humidity was tolerable with the overcast weather.

Overall, the course was clearly marked. I actually really enjoyed this run because it's not so large with thousands and thousands of participants where you feel like you are cramped on the course (nothing like the RNR series), but there are still enough participants where you don't feel like you have to worry about getting lost (although the course is clearly marked with lots of volunteers at every turn). I thought the aid stations were perfectly distanced so I was able to choose which stations I could stop at, and each one had both water and gatorade at each station. There were a few small short hills along the course, but the views of the city were great. This was my first time to Milwaukee so it was awesome to see a portion of the city as well as running by the Harley Davidson Museum. The best part of the race was being able to run through Miller Park. I am not necessarily a huge sports fan, but it's always a great experience to be able to see one of the classic stadiums. The course actually ran around the field with the big screen camera showing the participants running around. It was amazing!!!

There was a ton of food at the end of the race, and this is one of the post race parties I have seen where 2 beers are given at the end. It was Miller beer (hence Milwaukee, WI and Miller Park). I would definitely recommend this as a bucket list run, great course views, not overly crowded, and everyone was super friendly. Loved this run!