This was my first time running a Hot Chocolate race so I wasn't exactly sure what to expect other than some chocolate.

The expo was held Thursday and Friday before the race. It was held in the usual spot for Philly expos in the convention center, just a different room than I've been to but doesn't matter. The convention center is generally easy to get to and we always find parking on the street. I was hoping to make it down in time for one of the Easter egg hunts for the kids but the last one was at 4:30 and I had work so didn't make it. We still had fun taking pics with the Hot Chocolate inflatables, sampling some chocolates and other treats. I really loved the electronic bib system. I simply brought up my race email, they scanned it and printed out my sticker and slapped it on a bib, took two seconds. I appreciate this especially when the kids come to an expo with us! I then was able to quickly pick up my hot chocolate bag that contained my hoodie. It was so nice to get something other than a tech shirt and the hoodie was definitely very nice. I also thought it was great that they allowed people to try them on and make exchanges.

On Race day we set off as a family into the city. There's a garage about a mile from the Art Museum that's always $5 on the weekend so that makes logistics super easy. I had made the mistake of telling the kids there was going to be bouncy houses for them to play. Unfortunately there was no kids play area, however I'm 99% sure it was because it was VERY WINDY. Everything turned out fine tho, as there were lots of kids for them to play with and 9 miles is not too long for them to occupy themselves ;-)

The 5K started at 7:15 and 15K at 8:00. This worked out well as far as potty use since all the 5Kers were out on the course. As much as I love corral starts, this one wasn't exactly beneficial as it was completely random assignment and not according to pace. I appreciate that they were trying to spread things out but it doesn't work out that way when it's random. Even though the course was not much different than most Philly races, I still enjoyed it. It's always a great feeling running down JFK boulevard towards City hall and then we turned around and ran an out/back along West River Drive, which is always beautiful along the river. It was pretty blustery at first but things seemed to calm down and it was a beautiful sunny run. I really enjoyed it.

After finishing, I was quickly given my chocolate bar medal. I really liked how it was personalized for Philly with the liberty bell. Then I grabbed some water and snacks. The best part was getting my finisher's "mug" with dipping chocolate and lots of goodies to be dipped. While it wasn't really a mug (it's a plastic mug-like thing with sections) the kids and I thoroughly enjoyed it's contents.

So all-in-all I had a great experience at the race. It seemed very well organized especially given there were easily 15,000 people. The swag and chocolate goodies were great and of course the race itself was a lot of fun. The free runner tracking worked awesome, posting to FB, twitter and sent texts to my husband in real time and accurate. And lastly, free race pics!!!!!!! wooo!!!!

You can read a bit more about my personal race on my blog: http://runningmarathonmom.blogspot.com/2015/04/did-someone-say-chocolate.html

Link to this review
Login or sign up to leave a comment.
Amy recommends this race
(2015)
""You run Hills, I run Mountains" "

For the second year in a row I ran the Double Blue Ridge Marathon. The first loop being an unofficial run through the course just prior to the start of the official race. This was my 3rd year running the official marathon. I can't say enough how much I LOVE this race!!!!! It's so well organized, the race officials and volunteers are the kindest people you will ever meet. The course is so beautiful that you don't even care that it's "America's Toughest Road Marathon" It will totally beat you down but the people of Roanoke really show up for this race. They are out giving full support. Not only are they cheering but they have their own aid stations everywhere, they set up hoses/sprinklers, they have music playing and even moo-mosas and beer. It's just the best. And the feeling you have conquering Roanoke, Mill and Peakwood Mountains, undescribable. It's one of those marathons that needs to be on your bucket list! Did I mention free pizza, free beer and free race photos?!

Link to this review
Login or sign up to leave a comment.
Amy recommends this race
(2015)
"WIIIINNNDDDDDYYYYYYYY"

This was my 3rd year in a row running Ocean Drive Marathon. I love running down the shore so I enjoy this race. It is very flat except for a handful of bridges (not big bridges). The problem with this race is usualy weather. It's usually towards the end of March which can be so variable. Last year it was rainy and windy. This year it was a beautiful sunny day however there was a 20mph headwind, the whole entire race. It wouldn't have been as big a deal if I wasn't trying to improve my BQ. Otherwise it would have been way more enjoyable of a race. The expo is not much to talk about but that doesn't matter to me. The race is very inexpensive for a marathon which is a huge plus. There's not much as far as crowds along the course but the volunteers are nice and enthusiastic. The starting area is wonderful as Congress Hall allows all the runners to hang out inside and use the nice pottys before the race. Overall it's a nice little lowkey race.

Link to this review
Login or sign up to leave a comment.
Amy recommends this race
(2015)
"Phunt Me!"

You never know what the weather is going to be like in Maryland in the beginning of January. But that's just one of many things that makes the PHUNT awesome. I didn't run it in 2014 but I remember seeing all the pics on FB of the foot of snow everyone had to run in. This year halfway through it began pouring rain and it was just MUD. The course is 25K loops so everyone pretty much has the option of doing 25K or 50K. Even if you were signed up for 50 and you stop after 25, you still get your pint glass. The course was well marked with plenty of well stocked aid stations. They were impressive actually and the volunteers very enthusiastic and helpful. If I hadn't just had the flu for two weeks leading up to it, I would have totally indulged in a jello shot or two. Despite my own personal condition, it was so much fun and I would do it again in a heartbeat. 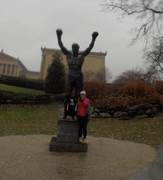 To be clear the Rocky 50K is a fat ass run, not a race. It costs $0 and has no aid, no shirts, no swag, no nothing. Just runners gathering together to have a great time running 31 miles. The run was created to follow the route Rocky ran in Rocky II. This run takes you from South Philly, to North Philly, through Center City, Kensington, West Kensington and back down along Kelly Drive back into Center City and then finishing atop the Art Museum steps just like Rocky himself. This year was the second year and my second year running. There's so much enthusiasm and just pure running run. There's no better feeling than finishing a 31 mile run, fist pumping on top of the Art Museum steps overlooking Center City Philadelphia. There's no better way to take a tour of Philly whether you live there or not!!

You can check out more of my personal experience here: http://runningmarathonmom.blogspot.com/2014/12/a-nice-stroll-through-philly.html