This was my first obstacle race, and it was a lot of fun! I loved the change from the basic road race, and not knowing what obstacles were ahead added an exciting challenge. Let me clarify that there is NO MUD involved, just running and obstacles - awesome. I did the Classic distance - 10.6 mi, and went in thinking the obstacles would be fairly easy. They started off not so bad - jumping through tires, walking across a balance beam, but then we got to the stairs. Around mile 6, you run 4x up and down Soldier Field stadium, and from there things get challenging. The monkey bars were spaced out and high, there was lots of jumping over high obstacles, using ropes to scale a wall, etc. If you can't complete the challenge, you're put in the time out box, and forced to do push ups, burpees, etc.

Expo - small, convenient, and quick. It was located in a hotel, not much merch or walking around, just a room with your bib, tee, and you're out. The tee shirt was a regular cotton tee shirt, which was great to wear post race.

Aid Stations/Cource Scenery - The course was awesome - we ran up Lake Shore Drive, around Navy Pier, around the museum campus, and through Solider Field. If done as a destination race, this course would be so awesome to experience as a tourist! The aid stations were quick and plentiful.

Overall, the race was managed really well. I was shocked at how quickly it flowed. All the obstacles were well marked, people were managing each station, and moved everyone along quickly. i was definitely recommend this to other people. It's one of the few obstacles course that does not involve mud and I was a huge fan!

Link to this review
Login or sign up to leave a comment.
Julia Montag recommends this race
(2014)
"My Hometown Marathon"

As a born and raised Chicagoan, I'm a little bias to this race. It's my home Marathon, it's huge, it's well supported, has incredible build up, and runs through some of the greatest parts of the city. Given my bias, here's my breakdown:

Information: participant guides, runner tracking, spectator guides, road conditions and closures, expo and packet pick up details - all will be emailed to you and more! The site is easy to use and provides the same information as email updates. The spectator guides are incredibly useful to send to family members planning to spectate.

Expo - McCormick place is not the easiest to get to, but most likely the few locations that could house such an event. The expo is smooth running, organized, and filled with lots of people to direct. You can get lost in there for hours, or get in, grab your bib, very disappointing shirt, and go.

Race - The race is run smoothly, the course is amazing. Water stops are long and clearly marked gatorade from water. Corrals got filled really quickly, so I would suggest to arrive early. I was still hustling into my corral when the national anthem rang, and I can arrived at Grant Park 30min prior. The course is filled with so many volunteers, entertainment, and spectators, there's hardly a dry moment.

I highly recommend this race to anyone running their first marathon or looking for a PR. From the time i received my entry email until I crossed the finish line, I was impressed with the organization and management of this race.

Link to this review
Login or sign up to leave a comment.
Julia Montag recommends this race
(2014)
"A Cheesy Good Time!"

I love themed races, and this one hit the nail on the head. What's better than a cheese run in the middle of Wi??

Packet pick up - located in the middle of town, at the same location as the start. It was great to get my bib, which was a designed like cheese! and know where I would be heading the next day. It was extremely organized, quick, and easy to pick up my bib, shirt, and race packet.

Morning of - Traffic controllers directing you where to park, made it extremely easy to get close to the start, and avoiding a traffic jam. Lots of port-o-potties and water bottles for racers waiting to start.

Race - The race started under a giant cheese arc, and ran down the rural roads of Hilbert Wi. Around mi 7, you enter a nature preserve with gravel road, and finish on flat road for the last 3mi. The course was extremely flat and open, lots of room for runners, great directing by the volunteers, and a good amount of water stations. The end finished with a straight away toward the cheese arch. Families who had finished the 5k were walking on the course, which made me a little wearing coming in for a big finish at the end. At the end, they announce your name, and hand out an awesome medal with a flying cheesehead on it!

Overall - The branding was fantastic. They did a great job at creating the cheese theme, and sticking to it! The shirt with flying cheese was awesome, along with the medal, and cheese bib. All the extra touches - cheese filled post race grub, cheese starting line, Sarentos truck all added to the fun. It was a great course, and honestly a nice change from running in the city. The race organizers really seem to care about this race.

Feedback - My only negative feedback would be to have water and gatorade on the same side so runners didn't have to go out of their way to grab either and also to patrol the finish line a bit more to diminish traffic for runners finishing. Otherwise, awesome race!

Link to this review
Login or sign up to leave a comment.
Julia Montag recommends this race
(2014)
"If you don't like vans full of sweaty people... Don't do this race" 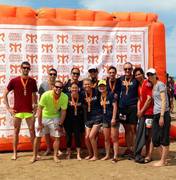 Ragnar takes a certain type of person... You spend 48 hours in a van with at least 6 other people. Most of your meals will be taken within this van, you'll change in the van, you'll sleep in the van ( if you're lucky), and you'll jump right into the van after a 10mile run on an open Wisconsin road at 2pm.

However, the bond you'll have with everyone in that van is amazing. You'll share clothes, food, blankets, van floor sleeping space....

Ragnar does a great job at organizing these relays. It was really simple to follow the instructions, and meet our runners at various check outs. It takes a lot of work to be the captain, and this person needs to be extremely well organized and read all the emails that Ragnar sends out.

Bring food that's easy on your stomach, and easy to carry - larabars, pbjs, fruit, nuts and bring extra clothes. I'd also suggest talking to someone that has done Ragnar before heading out. However, if you ever get the opportunity, take it! I experienced a side of Wisconsin - Chicago I never would have.

Link to this review
Login or sign up to leave a comment.
(2014)
"Fun company bonding... Do not run this race to PR"

The Chase Challenge is a great experience if you're able to get your company together for it. I had the most fun seeing coworkers who never run or exercise having a blast at the event.

That said, from a runner standpoint I had some beef.
1. I'm never a fan of corrals that don't require time submitted. A lot of people participating have not participated in a road race before, so 50% of the people starts in the first corral were walkers. I spent most of my time trying to get around people, but the street was so crowded, it was tough to move anywhere.
2. Too many course cutters! The path was not very clearly marked, but there were far too many people cutting clear corners.
3. No Medals. I like the bling :)

That said, the race was a decent course through the city, it was fun to get people running who don't normally, and it's a cool company pride event. It's not worth the $47 sign up fee.