I absolutely love this race! Where do I even begin?!

I was absolutely humbled by the support from volunteers and military personnel entering the base. Everything from parking and shuttling to aid stations was just perfect.

If you have never done this race then you are truly missing out. Just when you feel fatigued and question going on, you enter Great Lakes Naval Base to feel an indescribable feeling. The last two miles are tough but with the unbelievable support and cheering from the military personnel, you get your second wind.

Thank you so much to the military volunteers for running it with us and pushing us up!

I am still in awe of such a beautiful finish line!

Link to this review
Login or sign up to leave a comment.
Frank Nardomarino recommends this race
(2015)
"Polar Dash Chicago 10K" 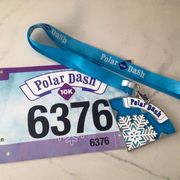 I missed out on this race last year and wasn't going to miss this one! This was my first winter race and I wasn't quite sure how to dress and I definitely overdressed!

Expo - I signed up at the Hot Chocolate expo and picked up my bib and gear while I picked up my other race stuff so this was extremely convenient. It was quick and painless.

Swag - The jacket is absolutely awesome and the color is perfect for guys. While I didn't wear the winter hat, it was just as cool with the Polar Dash logo.

Course/scenery - How can you beat the view along Chicago's lakefront?? The start line was on the sidewalk along Columbus and after a quick walk from the Soldier Field north lot, it was easy to find. The announcer had great energy during a pretty cold morning and it was nice to listen to his enthusiasm. I wish I had run the 15 miler, but the 10K was just as nice. The paths were completely clear and I anticipated a little ice and snow and wore my YakTrax but did not really need them. They did a great job of clearing the route! The bottleneck at the beginning is expected at most of these races but opened up after the first mile. What a beautiful path along the lakefront for some scenery! A quick turnaround at 35th street and the path takes you back along the skyline view!

This was a well run race and the volunteers braved the cold weather to help out and I can't thank them enough for standing out in that! The medal at the finish line was about as good as it gets! It will be hung proudly!

Link to this review
Login or sign up to leave a comment.
Frank Nardomarino recommends this race
(2014)
"Hot Chocolate 15k on a cold day!"

Well, since this is my second time running the Hot Chocolate I feel I can give a fair and honest review in comparison. To start:

Registration: Piece of cake as always since I registered early knowing this would be a popular sell out!

Expo: I came in on Friday to pick up my stuff and was there bright and early. I've heard lots of complaints from runners over the last few days about the expo being horrible, but honestly, I saw none of that. I waited in line for maybe 10 minutes at the longest! The expo had a ton of booths all well stocked.

Swag: The sweatshirt is great but I'm really not a fan of green or pink so maybe next year there will be chocolate brown, black, blue or reds? The medal?!? Absolutely the best addition to this race! Whoever designed this opened chocolate bar medal needs a raise! I heard hundreds of runners all saying the same. Bravo Hot Chocolate...bravo!

The Race: While it was rather cold out to start, that ambiance of excited runners and volunteers gets the blood warmed up. I was lucky enough to be in Corral B and the entry was easy. Once the crowds got in and the corral started to fill up, that's when the excitement built! Something about that countdown that really gets the crowd going. As for the course itself, I'll never be a fan of of the McCormick tunnel as it's just too dark and the potholes were just a danger. For the rest of the course, how can the beautiful city of Chicago be beat?!

I'm always going to run the Hot Chocolate race as it was one of my first races but also because the spirit of running it gave me the addiction to keep racing. I'll just have to remember to sign up early every year as the sellout in inevitable especially with the addition of that medal!

Link to this review
Login or sign up to leave a comment.
Frank Nardomarino recommends this race
(2014)
"Glencoe IBJI Monster Dash"

I had the opportunity to run the IBJI Monster Dash fun run and while the weather didn't cooperate, it was still fun.

To start with, the t-shirt is outstanding though too many runners didn't get theirs at the race and will be emailed at a later date. Luckily I registered early and picked up my stuff early.

The race was in downtown Glencoe and started out with cold rain, but that didn't stop people from flocking out and participating. There were many in costumes and this was primarily a family event.

I'll run it again but a few changes would be recommended:

1. Communicate a little better with the packet pick-ups. The website said Monday, but the stuff wasn't ready until Thursday.
2. Get a time-chip for the race. While it's a fun run, many people commented on getting their official times.
3. Notify people of the race photos as there were a few photographers but no info on where or when the photos would be posted.

Link to this review
Login or sign up to leave a comment.
Frank Nardomarino recommends this race
(2014)
"North Shore 1/2 Marathon"

My first 1/2 marathon and I was extremely happy. I've heard many great things about the race and wanted to scratch a 1/2 off of my bucket list.

The scenery is beautiful but maybe I'm bias as I grew up here! The course and people cheering you on along the way was fantastic. The hills not so much but a great test of muscular endurance.

I'll be doing it again every year!