Erin recommends this race
(2014)
"another solid HM from firstwave events. challenging course & worth it."

Good experience at the Jungle Run, the second event from the folks at FirstWave Events I've run in 2014 (the other being the Santa Cruz Half Marathon). The course started and finished at Los Gatos HS and took runners through a handful of residential and commercial areas between miles 1-4ish before picking up the Los Gatos Creek Trail (I think) from miles ~5-11ish. There's a fair bit of climbing on course, something I wasn't expecting, but it was manageable at ~500' total and was nearly constant ups from ~5-11. The event also featured a 10k option, which began later than the HM (I think), which made for a little congestion on the somewhat narrow paths that wound around the dam at the LGCT, but again, it wasn't too bad (and truth be told, it was nice for this runner to at least have some company and some other runners within sight!). We hooked up with the 10k folks around HM mile 9ish, split from them do to an out-and-back (which was mentally annoying and shitty) uphill between miles 10-11 or 11-12, and then did a 300m lap around the HS track before finishing on the adjacent grassy area.

This is my second event with FirstWave Events, and I am again impressed with the race's organization and quality. Runners got a nice v-neck technical (or at least the women's was) t-shirt, along with a medal, and AG placers all got funny little tiger tchotchke things (in keeping with the jungle theme). Only weird thing was that the AG weren't the typical groupings--mine was 30-39--but not a big deal. And finally, besides the great organization, tough course, and high quality, the post-race runner refreshments were awesome. Shaved ice FTW.

Definitely a good race experience and worth doing again, but I wouldn't expect extremely fast times, just due to the course.

Link to this review
Login or sign up to leave a comment.
Erin recommends this race
(2014)
"runnin SF! "

I had the pleasure of running TSFM in 2010 (unknowingly pregnant), and on sub-par training, and I loved it. Having never been to CA before, let alone SF, I was ecstatic when I learned that the course weaves its runners through some of SF's most acclaimed areas. The first half gives runners the enviable opportunity of running over (twice) the Golden Gate bridge, among other 'hoods and spots throughout the city, and the second half is WICKED WICKED WICKED fast; I'm talking you-might-trip-over-your-feet-because-you'll-be-flying fast. Of the 21 marathons I've run, TSFM totally stands out to me, and I can't wait to dominate the streets in July--this time, not pregnant, and with on much better training.

Link to this review
Login or sign up to leave a comment.
Erin recommends this race
(2014)
"fun destination race, fast HM course" 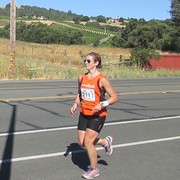 I was a social media ambassador for ZOOMA Napa Valley and chose to run the inaugural race, specifically the half marathon distance. In the months leading up to race weekend, I was impressed by how seamless everything seemed to be, and the same held true for race weekend. They had a Thursday packet pick-up in SF and a Friday one at the host hotel, the Marriott, in Napa, but no race day pick-up--something that would be nice in the future. The race was organized and run just like any other HM I've done that has been around for several years, which I think speaks to the race's strong organization. It started on time, had pace groups, had frequent and well-managed water/Cytomax stops, and the course's out-and-back nature made for some potentially fast running, had it not been as warmish and sunny as it were (but again, Napa in late June... comes with the territory). I thought it peculiar that we ran with traffic on both the out and back portions of the course--not sure if that was due to some city mandate or something--but luckily, there was little vehicular traffic during the race, and law enforcement officials were on the course, blocking intersections and keeping everything in line. The course was beautiful--vineyards on both sides of the road--and was definitely more scenic than many other races I've done. The post-race party at the Marriott was nice, too, and all the swag (Feetures socks, a running hat, and a tech t-shirt, along with a medal with a detachable charm) made this HM stand out from many others I've done. That said, it is pricier than most HMs (no doubt because of the swag and because of the race locations), so if you do decide to ZOOMA, I'd recommend registering early and/or getting hooked up with a discount code from their social media presence or from a race expo. Anyway, total blast! Definitely recommended. (and, if you want a more personal account of my own race experience: http://www.runningruminations.com/?p=1783)

Link to this review
Login or sign up to leave a comment.
Erin recommends this race
(2014)
"good experience, mostly flat, a bit tough to pace"

I had the pleasure to run Brazen Racing's Western Pacific half marathon as the 1:45 pace group leader. Brazen puts on a ton (20+) races in the Bay Area, all of which I've heard are excellent, and this was my first time running/pacing one of theirs since moving to CA. I had been warned that the course typically measured long (though the marathon was USATF certified and thus, a Boston qualifier), and it was, by about .1 or .2, +/-. That made it a bit tough to properly pace my group of runners because the discrepancies between my watch and the mile markers on course were significant at times, but in the end, it all seemed to work out, and I was over by only about .1 mile and still got us in sub-1:45.

Brazen is also known for their aid stations, which were nothing short of small buffets. I didn't partake so much in them (but definitely would have, had I been running the full), but the volunteers at the stations were lovely and upbeat.

The course was almost exclusively on loose gravel/fire roads and pretty flat, though it seemed harder to get to the appropriate speed on the fire roads than on the few pieces of pavement we had--might be just an issue with my internal metronome though. As a trail run, the course was open to the public, but on a Saturday morning, somewhat early, it wasn't very crowded. This also might be tough for you, as a racer, if you're relying on crowds of spectators lining the course because that was definitely not the case here; things were pretty quiet.

I can't speak to the shirt quality because we got pacer-specific ones, but the medals and post-race fanfare was all pretty ample and seemingly well-managed. I'd definitely do another Brazen run and am looking forward to exploring other trails in the Bay Area.

Link to this review
Login or sign up to leave a comment.
Erin recommends this race
(2014)
"a runner's race, totally worthy of a runcation"

Newport is a small race: 1k marathoners, and new for 2014, 250 half runners. All of the commentary I had heard or read before the race indicated that the course was fast, flat, and scenic, perfect for a first-time marathon, a PR attempt, or a BQ chase, and most of the run was alongside the Yaquina Bay or along the ocean. The first four-ish miles are closer to the ocean, and a bit crowded (with a lot of turns), but once you hit around mile 5, it's one big out and back til the turn-around at mile 15.2. The race is actually a fundraiser for the Newport and Toledo HS' various athletics and student organizations, so it's really cool to not only know that your racing is actually going to a good cause, but the students, themselves, (and their parents, probably) actually coordinate and run most or all of the aid stations along the course. If you're into or need huge crowds of spectators lining the course, big pace groups, and lots of fanfare, this definitely isn't your race. The spectators that were out there were awesome (and because of the out and back nature of the course along a country road, it's not exactly spectator friendly); the race actually did have a couple pace groups this year, at 3:05, 3:35, and 4:xx+, I think, for the first time; and the "expo" is more of a quick packet pick-up in a hotel's basement room the day before the race. Don't read any of that commentary as gripes about the race, though; I think the small-town and no-frills vibe of this race is what makes it awesome.

You might find yourself running sola for a lot of the race, and doing an out-and-back course can be challenging in and of itself (and especially in the absence of crowds and crowds of spectators), but if you know this going into the race, I'm sure you'll fare well.

More awesome and "personal touches" of this race included a beautiful and recycled glass medal to all marathon and half finishers, created by a Newport artist; probably the best finisher's shirt I've ever gotten from a marathon; and fun AG and OA awards for folks who raced well.

Just a couple small suggestions that I think would make this race even better: 1) somehow demarcate the outbound and inbound runners at the turn around and for at least a mile or so thereafter, perhaps by using cones so the runners know where they should go, since the runners shared one lane of traffic and made it kinda a clusterfuck for a while, 2) post a course elevation map online because even though the race is flat, it's still helpful to see where the undulations will occur, and 3) ensure that at the post-race festivities, there's a medical crew nearby at all times. The finish line (medals, water, electrolyte, medical) and the post-race festivities (food, band, beer, shirt, chowder, etc) were across the street and about a five-minute walk from each other, and my friends and I saw a guy in the festivities area pass out and possibly go into cardiac arrest, which was scary (but fortunately, he was fine). Things could have been really bad if he did go into arrest and the closest medical crew was 5 minutes away.

Anyway -- great race, great value, and definitely worthy of getting a bunch of your friends together to rent a house or a condo at the ocean for a weekend to run and play. And, if you want a lot more personal details, you can read my recap here: http://www.runningruminations.com/?p=1700