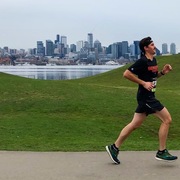 If you want a scenic race in Seattle, then this is it! However, with Seattle scenery comes Seattle hills. The course has a fun start right at the base of the Space Needle. The entire freeway is blocked off so there is plenty of room to avoid other runners in the beginning (this is important since there are quite a few half marathoners). The next chunk of the course is along a trail that get a little narrow, but is after the half marathoners split. Once you get to Gasworks Park, it's time to get ready to gut out the uphill climb back across the water and to the finish. I was running with a pack of five other guys and this is where we all started falling off. I was still able to PR, but fell 2 minutes short of the coveted BQ. All-in-all, it was a gorgeous course, I just wish there was a way to avoid the incline at the end.

The swag was pretty standard for this event. The long-sleeve race shirt is one of my go-tos for training in slightly cooler conditions. Other than that, there weren't a ton of extras.

The aid stations were spaced out accordingly for such a race. The only critique I would have is that it was a little difficult to find gu, so be sure to bring your own! Other than that, they had plenty of water and Gatorade within reach.

Parking in any city can be challenging. I stayed at the sponsoring hotel, so it was a nice 1 mile jog to the start. There is also street parking nearby if you are lucky enough to snag a spot.

Overall this was a very fun and well organized race. If you want to run through Seattle and are willing to brave the hills, then this is the one for you!

Link to this review
Login or sign up to leave a comment.
Jake Lewis recommends this race
(2019)
"First Ever Marathon Experience!"

In all honesty, I do not think there could have been a better first marathon for me. Even though I had completed multiple half's with no problem, nerves were still high. I had previously signed up for a marathon just outside of Seattle, but ran into an injury 2 weeks prior to the race. So I decided not only to keep it close to home, but to keep it cheap and small as well. There were 143 marathon runners and 326 half marathon runners total in the race, making it one of the smallest that I had run. Even though it was a small field, I was almost always running with others, making it easier to keep pace without being too crowded on the trail.

This brings me to the course itself. If you are not familiar with the area, there is a 21 mile long trail that connects the towns of Vernonia and Banks. It is mostly all paved asphalt and has a slight decline in elevation, making it a fast course that won't completely destroy your knees! This trail runs along a historic highway and curves through parks along the way. If you want PNW scenery, you can't get much more than this! Another perk (in my opinion) is that this is a point to point race. They have a shuttle bus that will pick you up at the finish and bring you to the start line. I personally was able to have my sister take me to start since she was going to stop at trailheads to cheer me along the way (thank you Sis). One thing to know ahead of time is that you will be running a near full lap around the middle school track to get to the finish. There were many runners gawking when they were told that they couldn't cut the corner straight to the finish. I personally like being able to "kick" the last quarter mile or so of a race, so this was ideal for me.

The aid stations along the way were everything that you could need. Water, electrolytes, gu, snacks, etc. They were spaced out accordingly and many were at the previously mentioned trailheads, so not only did you get the nutritional support, but also the emotional.

Parking was super easy at both ends of the race. Since my sister was following me along through mile 22 she had to park in the overflow lot that was just across the street from the school.

At first I was a little disappointed in the swag department. Unlike almost every race, there is no T-shirt provided. Instead you get a pair of FitSoks with Vernonia Marathon stitched into them. I guess that makes sense for runners, right? These socks are now my go-to for long runs, so my skepticism was proven wrong! I also bought a 1/4 zip pullover because I needed to have some sort of shirt from my first full marathon.

Overall, it was a greatly organized event by the Oregon Road Runners Club and I would definitely recommend it for any level of runner that is looking for a small or tree-lined trail race!

Link to this review
Login or sign up to leave a comment.
Jake Lewis recommends this race
(2019)
"Another Year, Another Shamrock" 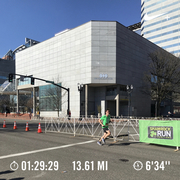 The Shamrock Run has quickly turned into an annual race for me. It is hard to beat the energy and excitement along this course. For being such a large race, it is extremely organized. The waved start really makes this race feel like a breeze. The beginning of the course is extremely flat, allowing runners to find their space and groove. The notable challenge of this course is the Terwilliger climb. What may seem intimidating is actually quite manageable do to the terrace-like incline. Once you've made it to the top it is all downhill to the finish. Oh, I can't forget to mention the beer garden with a live band at the end! If you want the "full race experience" then look no further than the Portland Shamrock!