My partner and I love trail running, but the most we had done for an official race was a 10k. I've done a couple of Trail Ragnars in Utah and Colorado and felt pretty confident about running my first half at Devil's Lake. I originally was going to run this on my own as my partner said he'd cheer me on from the sidelines. A week before the race, I was feeling super undertrained and worried about finishing, so I asked him if he'd run it too to help get me to the finish line! I'm so glad he ended up running with me because I think I probably would have given up on myself at mile 9 or 10 of this one.

I honestly didn't really do much research before showing up to race day, which meant I didn't totally understand the elevation breakdown. I thought it was going to be gradual climbs throughout the 13.1 miles, but boy oh boy, it was running normal grassy trails and then coming upon a massive rocky hill to speed walk up for 10 minutes until pure exhaustion. We'd get a few miles of a break with less elevation, and then we'd come upon another insane hill to climb that would take it out of me. It was HARD.

The rest stops were great though. Neither of us like to run with handheld bottles or vests, so it was nice to know that there was going to be enough water on course to keep us hydrated on a pretty warm and sunny day. When we were under tree cover, it was a super pleasant run, but when we got out into the open grassy spaces, the sun and heat were challenging for sure.

Trail races in general are a lot more chill and less chaotic than road races, which I appreciate. The vibe was fun and easygoing and even though it was a super challenging event, we'll be back next year for sure - just need to train better for all of the hill-sanity!

Link to this review
Login or sign up to leave a comment.
Courtney Nikolay recommends this race
(2018)
"Downhill to Downtown - Didn't feel so downhill! "

A year prior to moving to Austin, TX from Milwaukee, WI, I set a goal to run a half marathon in every state. So, when I got to check off Wisconsin (Door County Half), I was excited to be able to easily check off Texas with the 3M Half Marathon now that I was living in Austin. I'd heard over and over how the race slogan was Downhill to Downtown and was a net negative elevation race. After training for my first half, which was super hilly, I definitely didn't train as much as I did for the 3M thinking it would feel a lot easier.

Although it is downhill, there are still plenty of hills (Austin is actually pretty dang hilly). Add the city's typical heat and humidity, running in Austin can be pretty challenging. However, since it was a January race I wasn't sure what to expect with the weather since it was my first January living there. It ended up raining at the beginning followed by humid swamp-like conditions. It was gross and I struggled hard.

I found myself comparing this race to my first half, which took place in a beautiful state park. This course was not especially beautiful or scenic in any way. We parked our car in a strip mall parking lot and the start line was across the street from a Panera and REI, so not especially breathtaking. We ran along a busy interstate, down lots of busy residential streets, and then through busy downtown streets. It was pretty typical views for a city half, but they weren't impressive enough to keep my mind occupied and I just wanted it to be over from the minute it started.

On a positive note, the water stations, volunteers, and cheering stations along the course were awesome. Lots of families set up tents in front of their houses and cheered on runners all day and many of them even offered different food and drink options as we ran past. The spinning medal was super fun and the finisher tech t-shirt was nice quality. The Austin running scene is unlike any other that I've been a part of, so it was fun to run around a city with so many people that I know and recognizing faces in the cheering crowds. Because it is such a running community, race expos are always great with a ton to look at and learn about and this one was no exception. Also, since it is sponsored by 3M, the swag bags are AWESOME. So much good 3m goodies in one bag - I'm still trying to use everything they gave us!

I probably wouldn't do this race again as I prefer something a bit more scenic, and January weather in Austin is really unpredictable, but it is a popular race among Austinites, so maybe I'm not in the majority with this review!

Link to this review
Login or sign up to leave a comment.
Courtney Nikolay recommends this race
(2017)
"Very few places I'd rather run than Door County's Peninsula State Park " 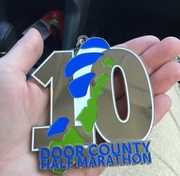 My partner and I love to leave Madison/Milwaukee and head to the Door County area as often as we can. Door County as a whole offers a ton to do for out of towners, which makes it a great destination race for runners from in and out of Wisconsin. From wineries and creameries to the quaintest coffee and antique shops, there is something for everyone in Door County. The half is before the busy tourism season really gets started, so some of the stores and restaurants are closed, but there is still plenty to see and do between all of the tiny towns.

So, when my partner and I were talking about doing our first half marathon and picking a location, the Door County Half was at the top of the list. We prefer trail running to pavement running, so this race was a nice compromise as it brings you through some of the most beautiful state park scenery (the weather was absolute perfection the day we ran) and you feel like you're running the trails while still on blacktop.

When we ran the DC Half, it was the 10th Annual race, which means they've had some time to work out the kinks and improve every aspect of the event. The expo was easy to get to and well organized, albeit a bit small (but understandable as it's a smaller event with fewer exhibitors/sponsors). The morning of the race was easy peasy as we drove and parked at the local high school (free) and took a fun free trolley into the state park that brought us right up to the hangout village area (where there were tons of porta-potties). We knew from the beginning of the race that we wanted to start running with a pacer to calm the nerves. The pacers were chatty and lovely and inspired us to move past them and finish at a faster pace (we were jogging more than running with the group we started with). There were lots of rest stops throughout with wonderful volunteers, ample opportunities for spectators to follow and cheer on runners, and the course was absolutely stunning (and just as hilly).

We've run several more halfs and a full marathon since this one in 2017 and it continues to be our favorite half to date. We'll probably make it annual thing moving forward since we love spending an extra day in Door County before and afterwards enjoying all of the wineries and trails. Highly, highly recommend this one!