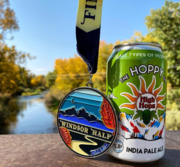 2020 has been a tough year for race directors, but first time race organizers Run.Windsor did an excellent job launching this race during a global pandemic.

Because of restrictions from COVID-19, there wasn't a traditional expo but the race directors did have an in-person packet pick-up at a local affiliated gym. There, runners received a mug, fliers for sponsor businesses, and a neck gaiter. Shirts were available for an additional cost.

To keep socially distanced, racers chose their preferred start time in a 25-person wave. I started my race in the fourth wave. There were 300 runners split between the half marathon and the heavy 10k (~7 mile race) and the wave starts meant that most runners were able to keep distance on the course itself.

This race was launched in my hometown, so I was very familiar with the course ahead of time. We started at a park and ran on a paved bike trail until around mile 2 when we were running on the shoulder of a pretty steep hill (400+ elevation gain in about a mile). You're quickly moved off the road to a sidewalk for a few more miles until you reach a small trail system around mile 6. The next mile or so was on a dirt trail with a lot of rolling hills. The path is not technical, though, so road runners shouldn't feel intimidated. After the trail loop, you circle back to the sidewalks to get back to a county road where you get to reap the reward of climbing a hill earlier in the race. Mile 10 is a fast downhill on the shoulder of the road before you are spit back onto the Poudre River Trail System for the last 5k.

The race offered aid stations every 2-3 miles or so, but I didn't take advantage of them. With COVID-19 in mind, I chose to wear a hydration pack and carry my own fuel. I believe the aid stations offered water, some electrolyte option, and honey stingers. There were a few people spectating the race, which was a nice surprise, but for most of the race there isn't a big spectator presence.

The race gave free race photos which is a really nice touch for such a small race. The finish line was also celebratory with a DJ calling out runners' names as they finished, a few vendor tents, and free canned beer from a local brewery. Finishers received a beautifully designed medal to mark their achievement.

For runners in Northern Colorado, this race is a great option if you want a challenging and well-organized race in fall. It's everything good about a small town race with a few special touches. I'm excited to see how this race expands once we are no longer in the middle of a pandemic. Massive kudos to the race directors for being able to put on a safe, in-person race during such challenging times.

Link to this review
Login or sign up to leave a comment.
Nicci McMurray recommends this race
(2020)
"Every Mile is Magic - Even with record high temperatures!"

I've run the Walt Disney World Marathon twice – once in 2018 as my first marathon and again in 2020 as part of the Dopey Challenge. The fact that I chose to run the same race twice should tell you everything you need to know about this race.

As a slower runner, RunDisney is incredibly approachable with generous time cutoffs and a focus on fun over finish time. The entire race weekend is an experience, and you can expect to spend hours and hours at the expo exploring both the official merchandise and other vendors. The merch for purchase is better than the free race shirts that you receive. The 2018 long sleeve I received is much better quality than the shirts I received in 2020 for the Dopey Challenge. For Dopey, you get 6 race shirts (one for each race distance and one for the Goofy and Dopey), but I find them a bit short in length. The medals for the races are superior to nearly every other race I've run.

RunDisney races are knowing infamously for their early wakeups. As long as you stay on WDW property, you are shuttled to the race start in luxury charter buses so you can catch a quick nap on the drive to the start line. Traffic on race morning can be a pain for runners who choose to park, but RunDisney at least doesn't charge these runners for parking. For as expensive as RunDisney races are, it's one expense that you don't have to worry about.

In 2020, the marathon was supposed to start at 5 a.m. but with delays due to preparing the course, it started closer to their usual time of 5:30 a.m. I wish it would have started earlier because we had record humidity and heat in January. At the start of the race, it was already above 70 degrees with 90% humidity. Throughout the morning, temps just continued to rise to dangerous levels where some runners weren't even able to run the fun course because Disney shortened it for safety. Despite the unfortunate weather that day, I applaud Disney's handling at aid stations and ultimately their decision to shorten the course. They gave out bags of ice, cold sponges, and towels at a bunch of later aid stations to help athletes get to the finish as safely as possible.

The highlight of any Disney race is running through the theme parks. In 2020, RunDisney changed the course to swap the ESPN Sports Complex with Blizzard Beach. Having run both course options, I'm not sure Blizzard Beach was an improvement. While it was more visually stunning, runners had to shuffle through smaller sidewalks and were teased by the refreshing wave pool (if only we could have jumped in!). The other parks were as magical as ever, with plenty of character stops and opportunities to use restrooms with flushing toilets instead of porta-potties.

My absolute favorite part of the race was riding a roller coaster IN THE MIDDLE OF A MARATHON! Around mile 18, I waited in line to ride Expedition Everest in Animal Kingdom. By that point in the day, the park was officially open to guests so you can jump off course and wait in line for a ride if you wanted to. I built enough of a buffer in my time so that I could take the 20 or so minutes to do something no other marathon offers. I still get a chuckle thinking about how my Garmin was moments away from sending a beacon to my husband because of my drastic change in speed! Ha!

Overall, I think the Walt Disney World Marathon is a magical experience. It's still 26.2 miles of hard work, but RunDisney ensures that you're well cared for while you do the impossible.

Link to this review
Login or sign up to leave a comment.
Nicci McMurray recommends this race
(2019)
"Unique distance through the streets of Cherry Creek" 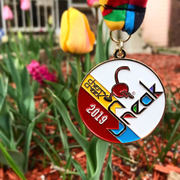 Denver has very few 5- or 10-mile races, so the Cherry Creek Sneak has filled a unique hole in the spring racing season. Because of its timing in late April, the Cherry Creek Sneak serves as a great tune-up race before a May/June half or full marathon. Overall, it was a good race but if you need a lot of crowd support on race day the 10-mile course is not a good option.

PROS:
- Beautiful location and well-marked course closed to traffic
- Nice medal
- Free race photos courtesy of Strava (that were spaced throughout the course - not just the end)
- Free and easy-to-find parking
- Post-race booths and offerings

CONS:
- Lots of out and back sections
- Lack of porta-potties on route (there was only one at the water table that was used as a three-way station during the race)
- Water stops only included water (no sports drink or other fuel)
- Few spectators

The majority of the course is flat, especially on the sections that loop around the Cherry Creek Shopping Center and 7th Ave. There were rolling hills between miles 5 and 6 while running through Cheesman Park. I was mentally unprepared for the 150+ ft incline, but if you're more familiar with the area then it probably wouldn't seem as daunting.

The start of the race was a bit underwhelming, but the finish was professional and fun. There were over a dozen vendors and booths in addition to the free bananas and beer at the end. The medal is cute, but the t-shirt given out is a long sleeve cotton shirt. It's soft, but not something I'd sport on a run or wear outside the house.

I would recommend this race to friends, but would warn them about the lack of fuel on course. If you're running the 10 miles, make sure to pack your own electrolytes and gels!