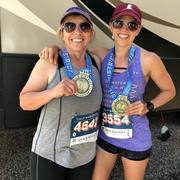 I attended the first year of the Silo District Half Marathon, and probably encountered most of the hiccups since it was the first time this race was put on. First off, I'm not a fan of the show at all. I told my mother to pick any half marathon and I would run it with her. She is a BIG fan of the show and it wasn't too far from home.

Packet pickup was easy and painfree, and surprisingly not at their shop. A nice tech t-shirt was included. (Unisex sizing, so their smallest size I use as a sleeping shirt). One complaint though is that it was white, and easily sweat through. So lots of see-through shirts the next day!

The next day, we waited outside of the corral for the marathoners to start. And waited....and waited. I guess the star of the TV (Chip?) was walking the marathon (in jeans and his toolbelt) and they wanted to get him on camera and started before the rest of us did. It was about 45 minutes late before the half marathoners started.

The race had great pace groups, and I paced right before the 2:00 half pacers the whole race. They were perfect on time. And the course went through very pretty parts of Waco, but also down several bare strips of hot, shadeless highway. I did get a free picture of me crossing one of their gorgeous bridges. Water stops were often and every mile had a large inspirational quote from one of the people from the show. I can see why big fans liked it!

The last few miles were without any shade, and we had a late start. It was May...In Texas. It. got. hot. After I finished, I went through the shoot that fed into their large shop area and wrapped back around to the finishline. Since this was a race that was advertised to the fans of this show, I think many of the runners were not from the area and were not ready for the heat., as I saw several people collapse at or soon after the finishline. It was 50 when we arrived at the race venue and 85 by the time my mother finished the race about 3 hours later.

We received an AWESOME rotating medal at the end. I say if you're a fan of the show, or love Waco, this race is definitely a must do. If not, I'm kinda meh on a half or full marathon in Mid-May in Central Texas. Be prepared for a hot race!

I'd forgive a lot here. Neither of the organizers were runners, they were shooting for TV at the same time, and it was the first time the race was put on. I hope that the issues that I encountered for the inaugural race were addressed this next year.

Link to this review
Login or sign up to leave a comment.
Sarah Bulin recommends this race
(2017)
"Mostly Flat course, but front loaded"

While San Antonio is typically in the 50s this time of year, I had the terrible luck of picking the TWO years that it rained. 2016 was my first marathon, and I will admit that it was a rough race. This race is front loaded, with all the tourist spots and the beautiful parts of San Antonio in the first 13.1 portion of the marathon. After that, its an out and back south of town with not much to see. With the rain, much of the entertainment couldn't play. So it was just you and the pavement. The second gel station was completely out by the time I arrived, but luckily I didn't rely on it and had my own with me. I wasn't even the most back of the pack, as I finished at about 5 hours. They had two more hours of being open and they were closing up shop!

The second time I ran this race was much better (2017). It was still a rainy day, but rained maybe for two miles rather than the whole day. The aid stations were better stocked, and the entertainment stages went past the 13.1 (even if the scenery was still lacking in the second half).

Having ran this marathon twice, I would say stick with the half marathon for this location. The first 13.1 really are awesome! I especially love the "Mariachi Mile" but do a full marathon somewhere else.