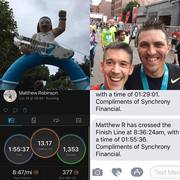 Let me preface this review by saying I recognize I'm probably in the minority here. A lot of people love the Rock N Roll series, and I'm sure they have good reasons. For me though, this really felt like the Applebee's of races - not a bad experience, but not a good one either. Here's why I probably won't run another RnR:

Rough from the start line: They opted to only give VIP runners access to the stadium, which meant only VIPers had access to the stadium bathrooms... About 20,000 people ran this, and instead of giving them access to stadium bathrooms built for 70,000 fans, they gave them a TINY number of honey buckets. The lines were up to 30 minutes long just before the start of the race, leaving a lot of people to have to run in a much later pack.

Quality of swag included perks: In a word - disappointing. The shirt was huge, which for me made it unwearable. They ran out of smaller sizes (no surprise) because a lot of folks had to trade down. The medal was underwhelming in terms of quality, and for $130, you kind of expect something of note. The beer... Michelob Ultra? Really? After burning 1,300 calories running the 1/2, the last thing I want is a light beer! I get it, they're your sponsor, but this is the Pacific Northwest, home of some of the best beer in the country! For me, that's a deal breaker. The music along the way is probably cool if you're walking the course, but if you're running it, you only hear about 30 seconds of music as you're passing it. One perk that I actually REALLY liked was the live race tracking. A few family members signed up to get text updates on my progress as I made my way through the course and really liked it.

Course: The first half of the 1/2 marathon course was really beautiful. There were awesome views of Lake Washington and we had the roads to ourselves, but the second half was pretty unpleasant. Not so much because of the scenery, though the scenery was pretty unremarkable (it was through the edge of downtown, so no much to see besides gar stations and grocery stores), but mainly because of the traffic. We had a few lanes, but the rest of the traffic was still rolling. It's a little unsettling to have a simitruck pass you and the hundred or so people you're sunning with, especially in light of recent attacks using trucks.

Value: Overall, this is probably the root of my disappointment. If this had been a $60-$70 race, I probably would not have ranked it so low. I mean, it was objectively low quality (in my opinion), but I'm on board with "you get what you pay for." In fact, now that I think of it, it's kind of unfair to compare them to Applebee's. Applebee's is big-box and canned, but at least it's cheap. By way of comparison, I really enjoy the Rugged Maniac ORC race (~$45) and the Spartan (~$120), and feel both are priced appropriately. You get a lot more (and higher quality) in the Spartan, and I don't mind paying for it. And for a fun-run, Rugged Maniac can be a blast. The Rock N Roll felt like a Rugged Maniac at a Spartan price. And with both those races, by the way, you get race photos for free!

What did you think of the race? Am I way off base? Would love to discuss below!