This race started at 9am, so as I was coming from out of town, there was plenty of time to pick up my race day materials. The entire process from sign up, to reminder emails, to race day pick up was seamless making the experience all around even better. After checking in, it was cool to watch the board and see where some of the earlier runners (50k,50m) were on the course as they had that projected and were scrolling through. Our race started promptly, and it was first on open trails, but quickly turned to single track, with a few more technical parts sprinkled in. Such beautiful sites with lots of tree coverage eventually opening up to a flatter, valley area in which you crossed over a stream. There was one aid station on this 11 mile course, which was plenty if you brought your own nutrition/water. After the aid station you had to watch your feet more, as there was more rocks/roots along the path but boy was it peaceful. I can't speak for the other racers, but there were certainly some stretches where it was just me and the trees, and I loved it. You hit some inclines along the way, and then you loop back in toward the finish where you hit one more hill and then its back to home base. There are quite a few people in the finish area, and you receive your printed results immediately. No medals, but they did have these cool finisher bottle openers. Lots of post race food including catered burritos and chips, and a large area for finishers/family/friends to hang out. All in all a well organized race and one that I would recommend and do again! (Maybe 50k next time......)

Link to this review
Login or sign up to leave a comment.
Ashley recommends this race
(2017)
"Trail Racing in the Rain (25K)" 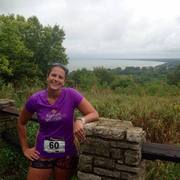 This was my first official trail race, so my comparisons are slim. However, this was an AMAZING race! Despite the dreary conditions, downpour, and overall gloomy day....the race was honestly my favorite for the year. It started with a handwritten card thanking me for registering and great communication leading up to race day. On race day, everything was well organized and it was easy to find the location, parking, etc. The Race Director gave a touching mini speech prior to the event and then we were off. The first 5 or so miles were really quite technical and then the course takes you through prairie, back through some trails, and then open prairie again for a total of 4 different loops. The different loops allowed you to stop at the gear stations and see friends/family that came to spectate. The Race Director personally handed out all medals at the end, which were very unique as they were carved from wood. Besides the reward of finishing, they had homemade soda, wood oven pizza, and plenty of treats. Overall I would say it was the best race experience I have had to date. I also highly suggest camping at High Cliff campground afterward, as it makes for a great weekend!
Pros:
-Great race for spectators
-Ease of parking
-Great communication with the Race Director
-Fun/friendly environment
-Etc
Cons:
-None

Link to this review
Login or sign up to leave a comment.
Ashley recommends this race
(2017)
"Wiiiiiiiindy Wisconsin Marathon " 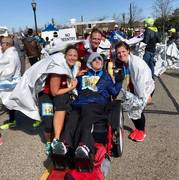 I have done this race a few times, but this is my first review. This year I did the half marathon with a non profit organization called my Team Triumph (see picture for a smile). I have a fairly active role in the SE chapter of this organization, and each year we work closely with the Race Director to make sure the event is a great experience for our athletes. Sign up is quite easy, and packet pick up also was a breeze with it located in the museum downtown. A small expo, but very quick and easy for those that need to jot over during lunch on Friday. Race morning was, as expected, cold and windy. This year was a great year to run the race, as they debuted a new route. The start was the same, but you head further south for the half, snaking your way into Carol Beach before heading back north and toward the harbor. It did get quite tight near Carol Beach with runners, but then the course really opens up after that. You hit the downtown area and then head up toward Carthage which is nice and open (but also windy) with great views of the lake. After Carthage, you head back south and finish at the start line. There is really only 1 big hill and a bit of a grade change by Carthage, but otherwise the course is flat. I liked the change in course this year. In years past Carthage is actually the 8 mi point so when you get back downtown you have to head south for 2 additional miles. It was nice to hit the downtown, make a turn onto a straightaway and head right to the finish line, which always tends to be full of spectators. They have plenty of post race snacks and also your bib ticket gets you a free brat/hotdog and a beer (although I wish the beer had been a bit larger). There is a 5k and full marathon option as well and overall I think this is a great family event in a nice location!

Cons:
-Weather (but we are the Midwest)

What. An. Experience! I signed up for this race originally planning on the half, and in a brief split decision...signed up for the 50k. This was my first ultra, and prior to this I have had just one marathon under my belt. I thought the communication from sign up to race day, on part of the Race Director, was fantastic. The two practice runs as well leading up to the race were very organized and stress free. Leading up to the race, as most likely do, I was monitoring the forecast. Being a fan of cooler weather for races, I was not liking the forecast for Saturdays event, and I believe my fellow runners also were feeling a bit of stress the morning of the race. It started with a light chill in the air but quickly warmed up and when the 50 milers came through after their first 9 mi loop, you could tell it was going to be a hot day. The 50kers started promptly at 8:15am. You start with 13 miles out and back on mostly single track course. This was a tad bit challenging at times to really get a good pace down, especially when runners started to head back toward the start. You arrived back in the start area which was convenient. Bag drop was easy to get to and it was nice to see family and friends and grab some fuel. You then head out to do 2- 9 mile loops on cross country ski trails so there was much more space. Mostly shaded, but it did have a few miles of open prairie and some killer hills in direct sunlight so my pace suffered considerably here. The high reached 80-84 that day and runners were definitely struggling, myself included. The aid stations however brought a certain level of energy back. The volunteers were fantastic and quickly grabbed anything you needed. By far the best volunteers I have every had at an event. Pickle juice was my saving grace that day, but the stations were stocked with soda, pretzels, cookies, gummy worms, plenty of water, etc etc. Although the stations were somewhat oddly spaced, I don't believe there would be a way to space differently due to the trails themselves. Coming into the finish after that second loop, after feeling pretty exhausted and somewhat disappointed with my lack of speed, I was amazed at how much energy was buzzing through there. The spectators were fantastic, along with the announcer, and I was able to gain enough energy to sprint on in. Afterward it felt great to just hang out with fellow runners and see the others come on in. Unlimited beer (which was delicious) and a large quantity of food was part of the post race party. Honestly it was such an inspiring day and I couldn't have picked a better race to have completed for my first Ultra.

Link to this review
Login or sign up to leave a comment.
Ashley recommends this race
(2017)
"Hoppin' along at the Hapalua Half "

I write this review with Ohua not being my home, so my experience may have been different than a local residents, as that beautiful backdrop completely sold me! I signed up for this race with a friend who currently lives on the Island, with no idea of what to expect. I feel this race was very well run with a variety of emails leading up with the race, a training run offered the Saturday before the race, and a beautiful backdrop in which to run by. The Expo was held at the Hawaii Convention Center in downtown Honolulu with convenient times on Friday and Saturday. We did get a parking spot just a 5 minute walk away, but I could see parking being somewhat challenging depending on how busy it is. The Expo itself was more stocked than most 1/2's I have been too. It was quick, easy, and they had a few vendors there with some nice merchandise. On Race Day we arrived to park at around 5am or so, and easily jumped on the shuttle bus that you take down to the start. It was a good energy, despite being so early, and quite a big crowd. Once the race started, on the course they had a good supply of water/aid stations (I do think a couple more water stations in the first 1-6 miles would be beneficial). There is a fairly big grade change around mile 9 as you start to head around Diamond Head, but there is plenty of fellow runners and spectators to cheer you on. Around mile 11 or so they had drummers, which was a nice motivating factor as you went up that last incline. The finish was right near a nice park area, near the beach, with a good amount of volunteers and vendors. Shaved ice, malasadas, bananas, and freshly squeezed juice awaited you at the finish, along with music! There was also a Jumbotron that was 20 minutes delayed so you could watch yourself finish. Overall a great race and I would highly recommend it to others!