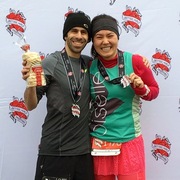 This is the best Valentines Day race in Seattle! I ran with my boyfriend as a tune up for my goal half marathon in March. I am very glad I did.

Packet pickup was at the local Road Runner Sports and was super quick. The shirt was a red hoodie with race logo, so soft and comfy. I am very glad they gave us hoodies instead of shirts. The bibs were cute and said lovers since we registered together with a spot to write your 'better half' on them. They offered a nice discount if you were shopping too.

Race day was so COLD! But seriously it was below freezing. They had a local coffee roaster in the finish festival that was offering samples so of course I had some before to warm up. Their warming tent which also served as their food station was so nice. I am very glad they had it!

Due to an earlier storm they had to alter the course a bit, which was actually easier for the 10k and 5k not so much for the Half Marathon. We ran the same loop twice and even though it was narrow at times I did not mind it. We ran a nice and even pace even with the few pinch spots. The one thing that did bug us was the 5k walkers. We lapped them at an inconvenient time.

The tunnel of love aid station was hilarious. It was a nice aid station that had both Nuun and water. I ran my goal which was sub 1-hour. After we finished we got a sweet light up medal and hot soup. Note for race directors- every cold race should come with a hot cup of soup.

There are a few things I wish they changed but they are unavoidable. Parking in the park was not an option due to a course change as was the narrowed course. Overall, I enjoyed this race and can't wait to run it next year!

Link to this review
Login or sign up to leave a comment.
Amanda Lee recommends this race
(2017)
"Great Disney race, perfect for first timers!"

I've raced a lot of Disney races, 7 in total, and Disney did not disappoint!

Expo- Was very well organized especially with all of the other events going on at ESPN Wide World of Sports. Getting my bib was seamless as was the expo. I really like the race shirt this year! The color and cut are very flattering.

Race day- I stayed on property at Coronado Springs and used resort transportation. Due to the long walk and the crowds I decided to walk to my corral before the rush of humanity and I am very glad I did. The race did start late, (a first for me at any runDisney event!), but the new waved start within the corrals was great and made it a bit less congested at the start.

I did not run this race for time and I am glad I did! The course itself it a bit narrow but I did enjoy all of the on course entertainment. None the less, it was very well managed and there were plenty of cheering cast members, character and DJs to cheer on the runners.

The finish line was wonderfully organized as always! There was even a glitter station after the medals for extra pixies dust. We were also given a banana, powerade, snack box, and a first for me- a bag to put everything in!

I am very glad I experienced this race. I highly recommend it for a girls weekend or for first timers.

Login or sign up to leave a comment.
Amanda Lee recommends this race
(2017)
"The race that never happened- a lesson in communication and customer service."

*This race was CANCELED*
Why am I writing a review about a canceled race? Because what happened is an important lesson about attitude, customer service and how to be grateful.

The expo and bib pickup for the weekend was a mess this year. Or at least it was on Thursday. My dad was with me and was running the Goofy but they staff sent us on a wild goose chase trying to find the pins we pre-bought. Long story short, everyone was confused and didn't realize we received them with our bibs. As we left the expo people were grumbling about the weather and weather or not the Half Marathon would happen.

Well Friday came and my family went into the theme parks to carbo load. We chose the Garden Grill, I highly recommend this place. After we finished my dad and I both checked our phones to see if the race was happening. Well it turns out it wasn't but the only notification we received was a FACEBOOK POST. Yes it was a Facebook post, no supporting emails, no supporting Tweets, just a Facebook post. This is one of my frustrations, I did not find out the race was "officially" canceled until 11pm via email the night before the race. I understand it was a game time decision because of the weather situation but there were other ways to notify participants and their families. runDisney could have sent a notification text and email via runner tracking along with the Facebook post but waiting 2 hours to send the email was frustrating. I do agree with their decision to cancel the race and I am happy runDisney did the right thing for the safety of their participants, staff and volunteers.

runDisney did offer many options to refund the runner. You could go to the expo and get a full Marathon bib for Sunday, get a gift card for the full entry fee, get 2 one day park tickets, or get a transfer entry. I chose the transfer entry but have yet to receive some sort of confirmation. I am very grateful runDisney offered participants options for the canceled race I do wish there was a bit more Disney magic when it came to communication post race weekend. I know I am supposed to receive a finisher medal but honestly I have no clue when that will arrive. I did receive my Coast to Coast medal at Star Wars even though I did not run a race in Florida. I did bring it with me to Princess so I could take pictures with it after running my "third" half. I am also grateful that I did get to have a family vacation at Disney World. We were able to spend more time together since I did not run the race. There was a silver lining in all of the disappointment.

I do recommend this race weekend. You run through two theme parks and get to see all of the characters. I would caution running this race over the next two years due to the added number of transfers from this year's canceled race.

Link to this review
Login or sign up to leave a comment.
Amanda Lee recommends this race
(2016)
"Hilly and interesting course" 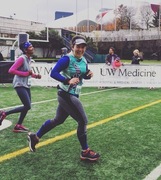 This race has some history for me- it was the first half marathon I ever ran and it was brutal. Flash forward a few years and it's still a brutal course.

The expo this year wasn't too bad, we go there early enough so the lines for bibs was non-existent. The only bummer is you still weave your way through all the vendors to get your shirt and goody bag. This year's shirt was a way better color (red) than in years past.

Getting to the race isn't so bad for me, I just walk down the hill. When we got there, there was little signage and we got a bit confused to find gear check. It was in the same place, in the concourse of Memorial Stadium, so we trudged up the stairs and dropped off the bags.

Overall the starting sequence and the first few miles aren't too bad. It's a bit crowded going down 5th and UO the Dearborn ramp but once the hills start it thins out. The first 7ish miles of this course are pretty solid. They are hilly but not as bad as the last 6.

(FYI if you do choose to run any major marathon or half in Seattle you will get a lovely tour of all the homelessness in Seattle. The city is trying to fix it, but keep it in mind.)

I was running just fine for the first 7 miles; I didn't feel too tired but I was getting cold. The rain and dampness wasn't helping. After a water stop at mile 7.25 the hills start. Galer street is a bit better than the old Lee street segment but it's rough. I had to walk it along with everyone around me. Once that was over the Madison hill starts. It's a consistent gradual incline that kicks my city every time. I was lucky enough to have a group of my running teammates cowbelling halfway up so that helped me immensely.

After the short downhill comes the hard part- Interlaken. The hills that keep on giving. This is my least favorite part of the race but I managed to get through it. The last mile is downhill and goes on an overpass then through South Lake Union. There was a group of people giving out beer at the 13 mile mark this year which was great!

The last .1 is up the mercer hill and then into the stadium. I haven't been that happy to finish a race in a long time. My boyfriend was there and took some finish photos which was a plus.

After finishing in a decent time, slow for Seattle Marathon standards. (Most people who run this race are fast since the field is 'hard core' runners due to weather and timing.) I got my finishers medal, it's alright, a spade blanket and proceeded to walk up the stairs to get my gear check bag.

Overall I had a pretty good time, the weather got nicer as the race went on and there was much more course support than in years past. I recommend this race for anyone who lives in the Seattle area, doesn't travel for Thanksgiving, and wants to run a late Fall half.

Link to this review
Login or sign up to leave a comment.
Amanda Lee recommends this race
(2016)
"Fun race for the non-competative runner"

I have run this race all three years and have really enjoyed it each year. The course is easy and finding parking is also not a problem. This year the swag bag was ok, playing cards, candy, some tattoos and an ok shirt. The previous years we received long sleeve shirts.

I ran Saturday and it was unfortunately pouring down rain. But luckily Zappos was giving away free ponchos so we could stay dry! I even ate a free doughnut before hand because it is Beat the Blerch after all!

I will say the course was super crowded and the start was completely disorganized so I had to bob and weave through all the walkers at the beginning. The aid station was the same way. Overall I ran a pretty decent time, got some sweet free race photos, and had fun while running in the rain so this race is a 4.5/5 in my book!