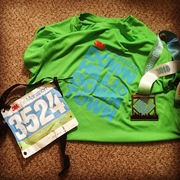 I love this race. And I love returning every year to run it. Austin is the first place I lived when I moved to Texas so in a small way, it’s my forever Texas home. And every year I run it, I feel an indefinable joy to be home if only for a couple of short days.

The expo this year, was much better than last year. More vendors to peruse. However, the 3M folks didn’t do a great job with signage within the convention center directing lost runners to packet pickup. There was a very kind police officer who was directing runners away from the tattoo expo (yup, there was a tattoo expo that I would’ve gone in if I didn’t have to buy a ticket) toward the correct exhibition hall.

The race starts at 7:00 AM, which is before the sun rises, meaning, you get to welcome the sun to a new day. Because the course winds through several neighborhoods (of which I have several stories and pleasant memories) you have folks who sit in their front yards drinking coffee cheering you on. While most half marathons I’ve run tend to wind through residential neighborhoods with the inhabitants cheering you on, I dunno, there’s just something different about the chutzpah of the average Austin cheerleader. Course support was great and even though I was at the back of the pack, the water/electrolytes were plentiful and delightfully frigid.

The course is famous for its downhill elevation. Thirteen point one miles of downhill RAWKS.
Trying to think of cons for this race and I can’t. Because 3M is the banner sponsor for the race you get a crap load of free 3M products in your swag bag which HANDS DOWN makes their swag bags the BEST ever.

The race start is seeded by projected times, so there’s no one standing sentry telling you your bib doesn’t match the corral you’re in. They allow you to self-seed. HEB (a large and rather awesum south Texas grocery store chain) provides the food in the finishers chute at the end which means great stuff and LOTS of salty HEB chips. Although they don’t provide finish line-to-start line bus shuttle at the beginning of the race, there was a shuttle back to your car/the start at the end of the race. And the line to get on the shuttle moved quickly which was a huge plus for someone who has just pounded out 13.1 miles and wants to sit down. From getting in the line to getting on the bus, time was less than ten minutes. BIG plus as I’ve waited way longer for other races. Also, the shuttle staging area is about a block from finish meaning you don’t have to hike to get there.

WAIT!!! I thought of a con (it took a while) if you want a bunch of course pictures take a camera with you, because there were two photographers on the course, one halfway through the race and one a couple blocks before the finish. And of course the guys at the finish line. But that doesn’t count for course photography. Oh, and one more not really con, but kind of con. When I went to pick up my packet, they didn’t ask me for ID…odd. But they did allow me to switch from a chick’s race shirt to a dude’s race shirt because I didn’t want the v-neck version of the shirt. So that balances out the oversight of verifying I am who I say I am...or not...It's a great race, well worth the trip south!