Brandi recommends this race
(2016)
"One of Atlanta's Top Races"

I absolutely love every thing about this race. The race starts and finishes at Atlantic Station and the course takes you on a mini tour of Atlanta.

The 5K and 10 Miler runners start together (in 6 different start waves) and run close to the first 2 miles together. While it was slightly congested until the split, it wasn't too bad. Since our waves were split up by pace, the runners around you were keeping about the same pace as you.

Yes, it is a hilly course (it is Atlanta), but one of the highlights of this race course is running the Cardiac Hill Challenge. Positioned at around mile 7 of the race course, Mizuno sponsors a challenge to see who the King & Queen of Cardiac Hill are as well as the 100 fastest. The challenge clocks your time over the course of a mile as you conqueror about a 12 story elevation gain over a mile on Peachtree Road.

If there is one thing that can help you power through 10 miles of hills, it is awesome course support. Well, this race seriously has some of the BEST course support that I experience. Thanks to school groups, the puppetry center, Back on My Feet, Girls on the Run, and even roller derby girls there were plenty of cheers to be had. Whether you were passing out water, holding signs, ringing cowbells, giving free high-fives, or just simply cheering loudly - THANK YOU!

Despite being exhausted from the night before, I ran a very solid race. With setting a new 10 Miler PR by over 7 minutes, I can definitely say that I am excited to see where my fall races will take me. I was using this race as a measuring tool for where I am at before diving deep into a fall and winter full of half marathons.

Link to this review
Login or sign up to leave a comment.
Brandi recommends this race
(2016)
"Very Supportive Race!"

There is something absolutely beautiful about women's races. Some may call it not "fair" to the guys, but with the running community becoming more and more dominated by women, it is nice to periodically see races that focus on women. The atmosphere of women's races is totally different than typical races and I cannot really describe it, but it is just a beautiful thing to be a part of. Women often get stereotyped that we are catty and snarky to one another, but go to a women's race and you will see that is not the case at all. Instead you will witness some of the most encouraging and empowering environments.

Each spring, Atlanta Track Club hosts the Atlanta 5K. This has been a favorite race on mine the past few years. I had to miss last year's race due to being out of town, but I was excited to be returning to the race again this year.

The venue had changed since I last ran this race in 2014. This year, it was held at Sutton Middle School which offered ample parking as well as places for a start/finish, corrals, and post-race activity. Momma K and I arrived pretty early but we tend to do that. Atlanta Track Club offered pre-race packet pickup at West Stride Running a few days prior to the race which a lot of runners took advantage of. This helped expedite the bib pickup portion of the morning for sure. When we got to the tents, we were greeted by plenty of awesome volunteers with great energy (thank YOU volunteers!). We headed back to the car for a bit to eat our pre-race breakfast and relax for a few minutes before heading towards the race area.

One of the many reasons that Atlanta Track Club ROCKS is Coach Amy. If you have been to any Atlanta Track Club events in the past year or so, you have probably seen her smiling face or heard her cheers pushing you to finish strong in the final stretch. Well, Coach Amy has ROCKIN' warm-up skills and really brought the energy level up! Typically at races most of the crowd is either not participating or just minimally "stretching" with the warm-up. Nope, Coach Amy's warm-up had everyone moving and getting ready to run. Yes, she is seriously THAT motivating.

The course was what you expect from a race in Atlanta - HILLS. While there were a few tough uphills, there were also a lot of downhill portions which made it more forgiving. It was a little bit congested in the first half a mile or so, but things really opened up after that.

While men cannot run this race, the guys were out in full force cheering and volunteering. A few of my fellow Atlanta Track Club Ambassadors were out cheering with signs, cowbells, and high-fives for everyone. Along the way there were dads and their children out cheering for their mom which was another cool sight to see.

After crossing the finish line, I collected my medal and long-stemmed rose from the awesome volunteers! This medal is pretty unique I must say - the middle flower charm (the red-ish colored one) can actually be removed and worn as a necklace pendant. How cool is that?!?! So many times you earn a medal then it goes on your wall. With this medal, you can display your medal but also wear a piece of it everyday if you choose to. Very nice touch, Atlanta Track Club!

Another great Atlanta Track Club even is in the books! The Atlanta Women's 5K is definetly a favorite of Momma K and mine and we both look forward to this race each year. Thank you again to all of the amazing Atlanta Track Club staff, volunteers, first responders, sponsors, and fellow runners who made this morning another wonderful time! See ya in 2017!

Link to this review
Login or sign up to leave a comment.
Brandi recommends this race
(2016)
"Fast Course!"

Super fast course! Most races in Atlanta feature their fair share of rolling hills, so finding a truly "flat/fast course" is hard to come by at times. With the first 5ish miles of the 10K being about as you can get in Atlanta, you hit a very generous downhill for the last 3/4 mile! You will want to save your legs a bit for that final stretch to take advantage of what makes this race on of Atlanta's fastest races.

Link to this review
Login or sign up to leave a comment.
Brandi recommends this race
(2016)
"Chilly and a Tad Hilly, but Worth the Chocolate!"

The first mile or so was a little congested as the 5K and 15K runners all started together. However, by the time we hit the first mile marker, things were pretty good.

You can't have a chocolate themed race without some treats on course, right? At the first water station, we were greeted with strawberry flavored marshmallows. I passed on these - (1) they didn't sound to appealing (2) with 8 miles left to run, I didn't know how these would do with my belly (remember, nothing new on race day). The volunteers were all amazing though offering a lot of cheers, smiles, and high fives despite the weather.

Mile 5 greeted us with M&Ms! Ummmm, yes please! They were a bit frozen, but a little sugar jolt was appreciated and I knew these would be ok with my tummy. We also had a few spectators out cheering for us on this bitter morning which was so much appreciated - even if they told me there were 7000 runners ahead of me. HAHA!

The final part of the course is a bit of a bugger - I won't lie. Heading up Centennial Olympic Park Drive is a bit grueling as you go up a slight up hill for about a mile as you come up towards CNN, Phillips Arena, and the Georgia Dome (and future Mercedes Benz Stadium).

Now it was time for what we came here for - CHOCOLATE! We headed over to the Finisher Mug area to redeem our bib tag for our chocolate reward. The process went super smoothly and once again the volunteers were beyond amazing.

Yes it was cold. Yes there were times that we totally questioned our sanity for doing it. Yes we are happy that we did it! Thank you again to the team at Hot Chocolate 5K/15K, volunteers, and emergency personnel that made this morning possible. I know that everyone was cold but it was a great time and the runners really appreciate all that you did to make the morning great.

Oh yea, the swag. Check this out - Hot Chocolate 5K/15K doesn't do race shirts they give out hoodies. Seriously - how many race shirts just end up in a draw only to be warn a hand full of times (if that). This is my 4th Hot Chocolate 5K/15K race and their race swag is always great! These hoodies are legit and totally nice and toasty - perfect for days like this! This hoodie will definitely get its fair share of wear.

Link to this review
Login or sign up to leave a comment.
Brandi recommends this race
(2015)
"Great race for a great cause" 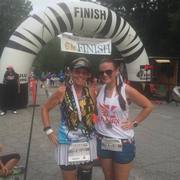 While most might find a course of rolling hills the whole way as tough, there was extra motivation to push through. There was something genuinely special about this race. A lot of the runners and volunteers were those that are in recovery and family members. The amount of support from fellow runners was nothing like I have ever seen before. I was truly amazing and beautiful. I am a true believer that everything happens for a reason and I fully believe that I was meant to go experience this race this weekend. Thanks to Heroes in Recovery 6K, I have a whole new outlook and appreciation for comradery among everyone participating.