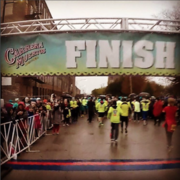 First time running the Carrera de los Muertos, and even with some clouds and rain, this was a wonderful race. Flat, fast, and tons of fun. Solidly on the list of Chicago classics that anchor every successful race season.

As soon as you arrive in Pilsen you know how much fun it's going to be. I took the Pink Line in from the West Loop, and there were runners with epically painted faces on the train already. Few blocks walk to the expo/start area, and there are people in costumes all over. The rain was a bit of a drag, seemed like it cut back on the performers and music in the stage area and along the course, but there was no doubt that this was Dia de los Muertos--plenty of brides walking around.

Apparently this was a new course for 2015. There are several thousand runners, and a loose self-policed corral system at the start which worked reasonably well, although a few walkers and strollers snuck in. First half mile was congested anyway, but once the course opens up a bit it's fast with few turns. One stretch along 18th Street has to be close to a mile of pure fast straightaway. Few more turns on the way back, and the last stretch to the finish line is long and straight too. Full course GoPro video here: https://youtu.be/ssRVLUCAuTg

Started raining harder after I crossed the finish line so reluctantly didn't stay around for the long lines at the food tents, or the live entertainment, which looked awesome.

The swag was terrific. Truly unique long sleeve tech race shirts, with an option to upgrade to quarter zips. Finisher medals with the race logo. Overall awards were skulls; at one time the age group awards were too, but it looked like they changed that this year. Didn't really matter to me, because there were so many fast runners in my age group that I didn't even hit the top 10, even though I pulled down a 7th in Bucktown a few weeks ago. Very competitive field.

All in all this is an awesome race and is already on my calendar for next year. Just hope the weather's better!

Link to this review
Login or sign up to leave a comment.
Kurt recommends this race
(2015)
"Chilly and hilly"

Both the full marathon and half marathon start within 10 minutes of each other at 7am on the second Sunday morning in November. I ran the half marathon this year, and it was a fun and well-run event.

Drove the couple of hours up from the Chicago area and stayed at the Madison Concourse Hotel, very nice accommodations at the race discount only a couple of blocks from the start and finish lines. Nice area along State Street for exploring and food without spending too much time on your feet.

Race expo was within walking distance too. Nothing special, but the volunteers were quick, competent and friendly. About a dozen vendors, with some nice official race gear from Greenlayer.

You'd expect a race in Madison in November to be cool, and it was: 32 degrees at start time, but with almost no wind and a bright sun on the rise. Decided to go with a singlet, Louva arm warmers and gloves up top; shorts and compression sleeves below; walked to the start line in a space blanket and was fine.

The start and the finish are on opposite sides of the state capitol building which makes for a pretty setting. Plenty of room in the start chute. The race is small enough that there are no seeded corrals, my only suggestion is that they put up pace signs as the pace teas didn't elevate their hand-held signs til late and I got caught behind the 2:30 group even though I thought I was standing far enough towards to the front to be with the 2:00 group where I wanted to be. Not a tremendously big deal, but the first couple of miles are congested and it wasn't easy to work my way up.

The course starts on a downhill through the downtown area, then becomes rolling hills or flats for most of the first half. As experienced runners know it's usually not a good idea to bank time early in the race, but this one is an exception--the more difficult hills are in the second half, especially a couple in the Maple Bluff area around miles 8-9. That last one is worthy of San Francisco or Austin, both for steepness and length. Very pretty view of the Capitol from the crest though, almost makes it worth it.

Most of the course outside of downtown is main streets or residential neighborhoods, with some parks thrown in. Not always the prettiest or most interesting scenery, but it was fine--it was a bright sunny day, there were enough cheering spectators on the course to make it fun, and time went by quickly. Until those hills.

You'll notice the uphills on the run-in to town, especially the last semi-serious hill in mile 11 or 12. Once you make the sharp turn onto State Street, the crowd will carry you up that mild hill to the finish, which is lined with spectators and noise.

Some nice touched in the chute: a PR bell, which apparently got broken by the number of runners who set PRs; some very delicious chocolate milk, which you'd expect in Wisconsin; and Panera Bread was there handing out a choice of three different kinds of sandwiches along with chips and a cookie. Beer tent for those who wanted one. Well done.

Course marshals and aid station volunteers were well-trained and well-staffed. Cheerful, friendly, lifeblood of the event.

Race shirts were kinda nice, but the medals were AWESOME. Attractive, heavy, nice ribbons too. Definitely one for the collection--they seem to really care about their medals for this race. And is there anything better than FREE beautiful professional race photos? Well done.

Shot a headmounted GoPro video of (almost) the whole course, my first time running with the extended battery pack for a half marathon. Should have had three hours of filming time, but wouldn't you know--turned it on 20 minutes before the start and I guess with the cold weather it ate into the battery life--the camera cut out exactly at the 13 mile marker, with a tenth of a mile and less than a minute to go to the finish. Man. So cut to black--don't stop believin'. Also had some audio issues as the internal mic kept taking over from my external mic, so there's the problematic GoPro case clicking noise through a lot of this, you might want to turn the sound down in those areas. But technical difficulties aside, you can get a good idea of the race from skipping around through the two hours posted on YouTube: https://youtu.be/tC0lgRcxcJ8

All in all this was an excellent race experience. Great town, interesting and sometimes challenging course, and solid race management. Very much recommended.

Link to this review
Login or sign up to leave a comment.
Kurt recommends this race
(2015)
"One of the best courses in the Chicago area"

Man I would love to place in this race--the age group medals are just gorgeous, as you'd expect. A course this flat and fast attracts serious runners from all over and it's one of the toughest of the smaller races to reach the podium--a 10k PR got me 11th in my age group, not that I'm that fast or anything, but a good effort usually lands me in the top 10 at this level of race.

Not much more to add to last year's review except to say that there is always bright sunshine for this race, and it's always held on the fall's first cold day. Well run and well done.

Link to this review
Login or sign up to leave a comment.
Kurt recommends this race
(2015)
"Gorgeous course, delightful race"

Third year running, second year reviewing. Everything I said about last year's race still holds, and the scenery on this course is always worth the hills.

As beautiful as the park is, the people who put on the race so genuinely nice that it's an honor to help them raise money.

Some misdirection by course marshals this year resulting in a wrong turn not far from the start, resulting in the 10k race running in reverse and for a mile longer, but you know what? With all that gorgeous nature around us, it was bonus.

Link to this review
Login or sign up to leave a comment.
Kurt recommends this race
(2015)
"A Chicago neighborhood signature race"

Regardless of your fitness level, there are a few Chicago signature races you have to do every year--Shamrock Shuffle, Soldier Field 10-- and the Bucktown 5k is solidly on the list as a keystone neighborhood race. Ravenswood in the spring, Bucktown in the fall--you can't go wrong.

This year's edition was run on a perfect early fall day: 60 at start time and plenty of sunshine. The start line is right next to the easternmost entrance to the 606, which makes for a nice pre-race warm up. Deep corral system, plenty of port-a-potties, well-trained volunteers, a welcoming neighborhood that doesn't mind getting up early...cheerleaders, children, and plenty of dogs...great atmosphere.

The course itself is flat and fast. Can be congested in a few places, including the start despite the corrals, and in places where it turns into two way race traffic. Some of the streets have been freshly paved but others had plenty of potholes and other rough pavement, so there's some dancing around in paces. The run-up to the start is a long straightaway to a right hand turn to the finish that comes up quickly. As fast as you're going on the straightaway, you hit that turn to cheering crowds and it's hard not to find another gear for the last hundred yards to the finish.

There are runners of all abilities as usual, but the top of the age group fields are usually pretty competitive, so if you really want to race you'll find some healthy company. Everyone seems to enjoy themselves though.

Parking isn't bad if you get there early enough. I usually find a spot on North Avenue half a mile from the expo area, and it's free until 10:00am when the pay schedule kicks in. Run fast and you won't need to feed the machine.

Third consecutive year I've run the race, and the swag has been among RAMracing's best--a great sweatshirt in 2013, warmup sweatpants in 2014, and this year, a half-tech/half-sweat zip up that may be the nicest race gear I've ever received. Bravo.

Run it once, and the Bucktown 5k will be a regular date on your race calendar.