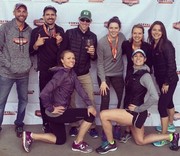 What can I say, I LOVE running in Corvallis, but this is the first time I've run a race in Corvallis. For those who may not know, Corvallis is home to Oregon State University, as a population of a little over 50,000 people is nestled just east of the Coast Range, with the highest peak in the coast range, Mary's Peak, easily visible from almost anywhere in the city. For the ultra runners out there, Corvallis is famous for the Mac Forest 50 K. Anyway, to the review...

Full disclosure, I know several of the people involved in making this race happen. Seeing the time, effort and care they put into making this event happen just makes the race that much better, in my eyes. Truly a group that cares about the community and putting on a solid event for both serious and more recreational runners alike.

EXPO: my wife and I arrived late Saturday (the race was on a Sunday) and had a friend pick our packets up for us. However, we could have picked up packets on Sunday morning before the race, which would have been very easy given parking for the event was the entire Reeser Stadium parking lot, very near the start and finish areas.

COURSE: As they say on their website, 'This scenic, 13.1 mile 'Tour de Corvallis' is mostly flat with two slow gradual climbs, and two gradual descents. The entire course is on paved roads, sidewalk and bike paths.' The race starts next to Gill Coliseum on the Oregon State University campus and essentially encompasses the northwest quadrant of Corvallis. The first 3 miles wind through campus and neighboring residential areas before they send you out toward the Bald Hill Natural Area. Miles 3 through 8 are either on roads that typically do not allow traffic, with the exception of university research traffic, or on multi-use paths. The scenery truly is fantastic and includes farmland and rolling green hills so you're never completely demoralized by long, seemingly endless stretches of misery :-) That said, the two gradual climbs occur during these miles. One from approximately 3 miles to 5 miles and a steeper climb (135 ft total gain) from mile 6.7 to the highest point in the race at mile 8.2. From mile 8.2 to the finish the course is mostly downhill, and feels fast...thankfully. The course had five aid stations, with Ultima as the electrolyte drink of choice. I primarily run marathons and longer distances so the frequency of aid stations was more than adequate as far as I was concerned. The race finished outside of Reeser Stadium.

POST-RACE: The race medal was very cool and the post race food and beverages were even better. Beer was provided by Corvallis's own Block 15 and Cider provided by Corvallis' own 2 Towns. The nonalcoholic replenishment options were also quite prolific :-) The race organizers really did a good job recruiting sponsors and vendors making the post race environment quite festive.

OVERALL IMPRESSION: This is not a huge race, but is a fantastic community event. Overall, 1056 people finished the half marathon. There were 449 males in 607 females the average finish time was 2:15. The winning time for the males was 1:07:23 and for females was 1:17:12. I finished 18th overall with a time of 1:21:23. While not a PR for me (I haven't ever really raced a half except the world famous B.A.T.H.), I finished with a smile on my face in the desire to return. This is an awesome race and I will absolutely encourage everyone in my running community to make the trip.