Rocky recommends this race
(2014)
"The Giant Race in Scottsdale, Arizona" 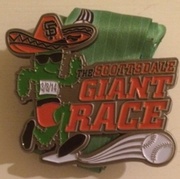 So in 2014, my goal was to run 10 races. Now that I have time to write about it. I have set some criteria that might help a runner or two in the future.
The first of the 10 races took place in Scottsdale, Arizona. It was the Scottsdale Giant Race. There were only two options in distance. Either you run the 5k or the 9k. There were no pace corrals.
I participated in the 9k.
Self readiness:
It was first of 10 races, and let me tell you. I was NOT ready for this race. The hot weather in Arizona did not help at all.

Difficulty:
It was a quite easy run, mostly flat grounds.
Sights/sounds:
I would rate this a below average for sights and sounds. It was definitely running through the residential areas by Scottsdale Stadium.

Tips:
I usually don’t hydrate too much before a race, but this race you might want to. It was hands down the hottest race that I ran this year and it was very difficult for me to push through the end. At the end of the race, there were volunteers with water guns to spray you down.

My personal experience:
I have to admit. Although this was not one of my favorite races, but it was one easy one. Think about it, the theme of a spring training run, well, it’s SPRING TRAINING. I completely feel like I was in training mode and it wasn’t that hard to conquer this race. It was my first time in Scottsdale and it was actually quite fun! Little did I know, 8 months later we would be crowned as World Series Champions (again!)