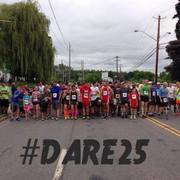 This is a perfect example of a small town, no frills race!

This was the 25th running of this race, and I don't think they've changed anything since the first year. It's the same course, the same sponsors, the same timing system (or lack thereof), and one of the same runners (Yep, he's made it all 25 years!).

The course starts and finishes in the middle of town and takes you on a tour of the entire village. The course is actually pretty funny -- up 1st street, down 2nd street, up 3rd street, etc. All the way to 8th street and then straight back to the finish. A friend of mine came to watch the race and I was able to see her 6 times!!!

Aside from the multiple 90 degree turns, there's nothing to slow you down here. No hills at all! That, combined with perfect weather, allowed me to actually PR!

Not much in the way of swag. In fact, all that was in the goodie bag was a cotton t-shirt that I'll probably never wear. But the race only cost $20, and worth every penny!

Not a destination race by any means, but it's refreshing to find a totally "old school" race. No frills at all!!!

Link to this review
Login or sign up to leave a comment.
John recommends this race
(2014)
"Albany's biggest race!"

The Workforce Team Challenge is always the largest race in Albany, and only open to corporate teams of at least 4. Because of those factors, this race always attracts both the fastest runners in the area along with thousands of walkers. The average pace spanned sub-5 minutes/mile to over 23 minutes/mile! But that diminish the enthusiasm and crowd support for the 8000+ runners.

The course is actually fairly difficult, but very enjoyable. Starting and finishing in front of the New York State Museum, the course winds though quaint city street before making a tour of Washington Park (with the tulips still in bloom!). The only drawback to this course is the 1/2 mile uphill that the race starts on. But it isn't too bad if you're properly warmed up. Especially considering that you get to finish the race by running down that same hill! It's one of the longest down hill finishes I've ever run.

The race starts at an unusual time, 6:25PM. This is so that the local TV stations can show the start of the race live at the end of the evening news.

This is a brilliantly organized event, put on exclusively by volunteers. Everything from the registration process, to the expo, to the pre and post-race activites are world class. And results are streaming live to the internet so you know your result as soon as you finish.

One really neat, and unusual feature, of this race is the team scoring process. There are three divisions : Male, Female, and Co-Ed. With your top 4 runners times added together. But what makes this race unique is that you can have an unlimited number of runners on your team, and you declare which runners are in which division AFTER the race. So if you don't think you have a chance in one division, you can swap runners into another division. The post-race scoring strategies are actually pretty fun to follow.

Because this race starts and finishes near the NYS Capital, after normal work hours, parking is never a problem. In fact, because of the downtown start, a good percentage of the runners walk to the start from their offices.

This is a wonderful event that really does a lot to get non-runners participating.

Link to this review
Login or sign up to leave a comment.
John recommends this race
(2014)
"Tanglewood and Trails, what's not to love?"

Starting and finishing at the beautiful Tanglewood, in Lenox, Mass., this is a real "punch you in the gut", difficult trail race. It's one of those races that only a very select few won't need to take walking breaks from time to time. AKA - my kind of race.

The race is very well organized. With parking and packet pickup/registration taking place just outside the main entrance of Tanglewood. There is great music planing in the parking lot and announcements were constantly informing the runners of the start time and location. About 15 prior to the start, all the runners walk to the start line (about 1/4 mile walk). After a few brief announcements, the race started exactly on time!

As soon as you start you know that it's not going to be easy. The race goes uphill for the first couple miles. And the trails are somewhat technical, so you have to be paying attention the entire time. The course was marked "okay", but could have been done better. I talked to two people that made wrong turns and added a bit of distance. And this cost one person 2nd place overall (he joined the race in 4th place when he back-tracked and got back on course).

The finish is wild! You come out of the woods about 1/2 mile from the finish and get to run down hill across a gorgeous grass friend before hitting a tree lined path to the finish line.

Link to this review
Login or sign up to leave a comment.
John recommends this race
(2014)
"Nice race for a great cause"

This is a great race with lots of sponsors, so the goody bags are great! This isn't just a half-marathon. You they also offer 5k and 10k options, with both those races starting one hour after the half marathon. This is nice because you're not surrounded by 5k runners at the beginning of the race. Also, as you get near the finish you merge back in with the other runners so you're not so alone.

The course isn't overly scenic, but there's nothing bad about it at all. And it's also a very fair course. Not pancake flat, but no killer hills at all.

Packet pickup was very well organized, and they also offered early packet pickup the night before the race. The early pickup isn't totally necessary because of the size of the race, but it is appreciated. Also, for only 400 runners, they had about 10 porta-potties, and inside bathrooms as well. No restroom lines at all. A real treat (yeah, runners appreciate the weirdest things)!

Watertown is a bit of a hike for most people, and I would not call this a destination race. But if you happen to be in the area, it's well worth looking into.

Link to this review
Login or sign up to leave a comment.
John recommends this race
(2014)
"Running, Racing, and Rock & Roll!"

When upstate New York's premier concert venue teams up with a New York State Park and the most innovative race production company in the State -- you know you're in for a great race!

This race starts within the ampitheater of Saratoga Performing Arts Center (SPAC) before heading out for a tour of the amazing Saratoga Springs State Park. Along the way, the race passes 23 bands and entertainment locations. It's a pancake flat course that winds along bike paths, tree lined roads, two golf courses, and several ponds. Before finishing up again in the ampitheather. After getting done with the race, you can visit any of the vendor booths and band-stands they had staged in the post race festival.

This race has everything, including a ton of sponsors. So the shirts were great and there were a pile of give-aways for the runners.

The event offered both a 5k and 10k course (with rumors of a 15k for next year!). Both races were fast, but not elite by any means. So it's very possible to walk away with an age group award if you have a good day.

There is also a 1k kids race that had hundreds of participants :)

I HIGHLY recommend this race!!!