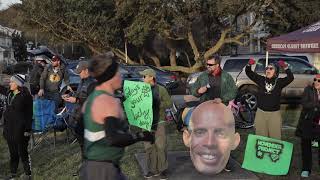 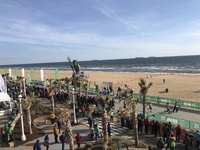 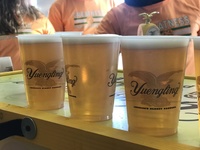 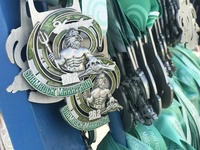 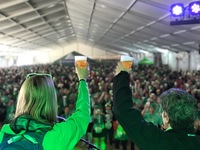 Whatever you run for, come run with us during the Yuengling Shamrock Marathon Weekend. Celebrate your race and the “Luck of the Irish” with 25,000 runners from all 50 states and around the world. Lace up your sneakers, adorn yourself in green and conquer the streets of Virginia Beach, Virginia, on March 20-22, 2020. You’ll enjoy flat, fast and scenic courses along the beautiful oceanfront and recover at our huge finish line celebration featuring live music, ice-cold Yuengling beer and much more.

What did you think of the race? Share your thoughts! Write a Review
Robert Shultz recommends this race
2015
"A Good Race in a Great Location"

Race Organization: 15/20
J & A Racing is the organization that puts on the Shamrock Weekend and my first experience with them was a great one. They put on a great race weekend and I would not only recommend this race to other runners, but any other race that they put on. There were a few things that I felt could be better, including the starting line being way too crowded and without a clear path for the runners to use to get to their corrals.

Expo: 16/20
The Virginia Beach Convention Center, where this expo and the Rock and Roll expo takes place, is a great location for any event. It is just blocks from the beach, but provides ample parking so you won’t have to worry about how you are getting there. The center is big enough to hold the largest of expos, while still providing some intimacy allowing you to not feel overwhelmed with the size, like I did with the Chicago and NYC Marathon expos. The one downside to this race, the same with many local races, is that there were not many of the larger companies present and instead you had a lot of local companies that runners from out of the local area like myself cannot enjoy.

Race Experience: 12/20
I have a motto that you can never be upset at all about a PR so my race experience will be lifted because I ran so well. The course is pancake flat, even flatter than Chicago, and a great course to PR on. I would look to this marathon course as a PR opportunity if I didn’t loathe training through the winter weather of January and February. The big flaw in my race experience was found at the aid stations. The half marathon had over 8,000 finishers but the stations were set up for a race about half that size. I completely missed two water stations, not because I didn’t want anything to drink, but because the traffic was too much and I couldn’t get over quick enough to get something to drink. I didn’t want to sacrifice my pace for a drink. Worst of all was at the PowerAde Gel Station. This station consisted of tables set up with the Gel boxes opened and sitting out and runners had to run by the tables (it was only 2 tables long) and grab the gel that they wanted. There was NOT ONE volunteer located at this aid station. With a race this large, and promoted and ran this well the water and gel stations should be better prepared.

Post-Race: 16/20
After you cross the finish line it is always a time of emotions, fatigue and excitement. Here you crossed the line and as the post race excitement rushed over me I walked through and got my medal, my food and drinks along with the race extras (discussed below) and met up with Bride as I exited the runners area. That excitement quickly subsided as I looked at the line for my UPS truck holding my post race bag. In many races the trucks are separated by your race number, or your last name but here they were divided by your corral. The unfortunate thing about this is that many people in your corral finish at the same time as you do…so there was a long line. After the race my body immediately began to cool down and I became very cold while waiting for my bag and it was obvious that everyone around me was suffering as well. This process can easily be improved and I hope they find a more efficient way of getting the bags out next year.

After the bag check debacle the disappointment ended. I entered the post race celebration tent and could not help but smile. Inside each runner was able to get not 1, not 2 not even 3 but FOUR beers! Also available was warm soup and great bands for entertainment all day long. This was by far the best post race party that I have ever been too immediately after the race concluded.

Extras: 18/20
Every race usually has something extra. The larger and more prestigious the race the more extras they usually have. Chicago, NYC and Boston have tons of special merchandise designed specifically for that race each year and almost every major race gives their runners shirts and other small knick knacks to remember this event. The Shamrock takes that to a whole new level. When I arrived at the expo I was given my shirt but as I entered the race store I realized how much they embraced the St. Patrick’s Day theme of the race. There was so much green theme merchandise. But the best awaited me at the end of the race. As I finished I was given a real towel, instead of the classic aluminum blanket that so many other races give, but I was also given a great running hat with the logo for the race. These extras really provide a better experience and a great memory to end the race. Not only do they serve a purpose to keep you warm after the race, but they also all you to show off for many years to come.

MY OVERALL EXPERIENCE: 77/100
This race was great. You finish on the beach, and you get some of the best extras that a race can provide. The course is a PR seekers dream and there is plenty of beer for you waiting at the end. I would recommend this race to anyone looking to do a spring Half Marathon, especially those wanting to relax around the race. I love running in VA Beach and now I know that not only does it put on a great Rock n’ Roll race every year on Labor Day but the Shamrock Half Marathon rivals the quality of that race as well. VA Beach has risen up in my list as one of my favorite running destinations and everyone should experience finishing on its boardwalk at least once!