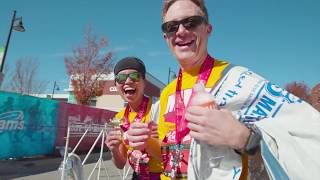 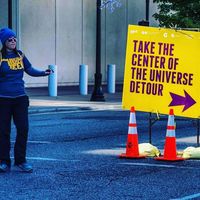 Thank you to everyone who Rocked the Route last weekend.

What did you think of the race? Share your thoughts! Write a Review
Melinda Urick recommends this race
2017
"AMAZING crowd support - dubbed a "marathon-sized party" for a reason!"

If you are the kind of runner that thrives on fan support and even a Jell-O shot (or four, and a couple beers, and maybe a mimosa, too) - or even if you WANT to be that kind of runner - then the Route 66 Marathon is the race for you!

The course is difficult. So now I understand the need for all that beer. Oh, did I mention there were also Fireball shots? While not officially race-supported, these "aid stations" are fully supported by the race and the communities therein. I only wish someone had a Jell-O shot for me at Mile 24, when the was incredibly sparse with fans and support. The official aid is about every two miles - water and Gatorade, with rotating flavors if you're into that. There was at least one gel station (maybe two).

Everything about this race is incredibly well-organized. The medals and swag are some of the best of any race I've participated in. I loved the confetti cannons for each of the start line waves. Finish line had beer and pizza (no gluten-free options, sorry!).

Get the VIP Mother Load upgrade: skip the packet pick-up line, and options for upgrades for pre-race accommodations (real toilets that flush!) and post-race party (more free booze, if you didn't have enough on the course). I didn't participate in the Center of the Universe Detour, and there was seemingly no additional cost to do so. Bummer, because it looked to be a blast - there is also free beer there, too, and a special coin commemorating your completion of the "world's shortest ultra-marathon."

Sincerely, you missed the best party of the year. Even Santa was there.

Thanks for the review and feedback, Melinda. We do hope you'll come back to do the detour.