Write a Review
What did you think of the race? Share your thoughts! Write a Review
2014
"Fun Hometown Race but Logistical Issues" 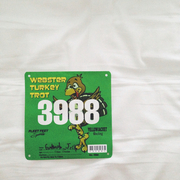 I wish I had more positive things to say about my experience at the 2014 Webster Turkey Trot.

Registration & Race Fees: The Webster Turkey Trot uses RunSignUp.com, so the process is pretty seamless. There are two race options – 4.4 miles or 2.5 miles – and there is no price differential for the races. When I signed up, the race cost $20 and the max cost you would have to pay for the race is $30. Overall it's a good value.

Packet Pick-Up, T-Shirts, and Swag: During the registration process, you select where you prefer to pick up your packet. Since I was driving into town, I figured I'd pick the location closest to where my family lives. The new Armory Fleet Feet location is great and convenient, though there was some confusion because the address for Fleet Feet was off in the race registration email (145 versus 155 Culver). That led to some confusion and wandering around in the cold for a while before we stumbled on some other runners who were trying to find packet pick-up as well. Upon walking in, a Fleet Feet staff member pointed us to a rear conference room for pick-up. The folks who were looking up names and distributing bibs weren't particularly friendly, and for some reason they wrote our names down (on the bib) and misspelled them. I'm not sure why they didn't just ask if we could write our names at the bottom as they assigned the number. Since this is a no-frills fun run, the only swag was a short-sleeved unisex tech tee. Unfortunately, I'm not a huge fan of the colors. With the turkey laid on top, I look like a Virginia Tech Hokie in it!

Getting to the Race: Because of the limited parking at Webster Park, the race organizers sent out several pieces of communication to get people to park at designated local schools and take the shuttle buses in. We had zero problems catching the shuttle from my high school to the race start, and arrived with 45 minutes to spare.

The Facilities: There were plenty of porta-potties at the race start, but most people opted for the regular bathrooms in the park (which are heated!). I didn't see any porta-potties along the course, so that seems problematic if you tend to experience GI issues when running.

Course Itself: Overall the course isn't bad. It starts and stops at Webster Park, but that makes for tricky parking. The course winds through part of Webster, in and out of neighborhoods – a very suburban race. I enjoyed the small hills that provided a chance to gain some momentum and surge forward. (After running in the Midwest for so long, it's nice to have something with more than five feet of elevation change!) The one issue is that the race course hasn't changed since 1972 (when it wasn't even really a road race), so the last quarter mile of the race goes down what is basically a ravine in Webster Park, through mud and grass. Due to the wet snow flurries and number of people trekking through this area, it was very slick. By the time I got there, it was basically at a standstill as people gingerly waded to flat ground. The final part of the race is on grass, so with muddy shoes and slightly slick terrain, it makes it tough to sprint to the finish. Don't plan to achieve a PR this race, especially with its unusual distance and the fact that it's a fun run. Many people stop suddenly or walk with a big group of people, making it a race that you'll likely be weaving in.

Aid Stations: My biggest issue with this race is that there were NO aid stations. None! For a 4.4 or 2.5 mile race, I wouldn't expect there to be any Gatorade, but water would have been great. I understand that having a road race winding through neighborhoods on Thanksgiving Day would make it harder to clean up after aid stations, but that's tough. I've never run a race without water stations before. When I run this race again, I'm definitely going to bring a handheld water bottle just to be on the safe side.

Post-Race Amenities: To get to water or food, you had to climb a rather large hill (still grass/mud). By the time you got up there, there weren't any posted signs so it was tough to figure out what was where.

Leaving the Race: This was the biggest issue. While each bus getting TO the race is designated to go straight from one school to the race, the shuttle buses loaded everyone up and hit every school on the way before returning to pick up more people at Webster Park. To line up for the shuttles, you had to get into a very long line that went back DOWN the hill you climbed to get water/food post-race. We ultimately spent an hour and fifteen minutes post-race waiting for the shuttle. This is pretty rare for a race this small that doesn't rely on, say, the Metro or the subway. Given the cold conditions and flurries, people were shivering as they stood in line. Even after showering post-race, I was cold and couldn't get warm for another two hours or so.

Overall, it's tough to say. This is a well-loved local race in my hometown, and I'm glad that I finally had the opportunity to run in it. I would definitely run this race again, but here's what I would do next time:

- Ask a family member or friend to pick me up post-race and drop me back at my high school. (Or, if they have time, drop me off at the race and pick me up.) I saw a few people do this, and it seemed smart. Otherwise, I could also get to the race very early and plan to hang out in my car until closer to race time.
- Pack a post-race bag to check. If I plan to wait for the shuttle, this is a must. I've never done bag check but I think a warm change of clothes would have helped considerably.
- Bring a handheld water bottle. By the time I run this race again (in 2016 since I will be in Raleigh next Thanksgiving), they may have added aid stations. To be on the safe side, I will likely bring my Nathan handheld.

Would I recommend this race to others? It depends. On BibRave's required question, I said no. But I think it depends. If you're familiar with the Webster area and you want to squeeze in some pre-Thanksgiving miles safely, this is a great way to do it. (My hometown is not known for being all that pedestrian-friendly, and many roads don't have sidewalks.) It's a relatively cheap race, but there are some frustrating elements that you'll need to consider in advance.