Write a Review
What did you think of the race? Share your thoughts! Write a Review
Frank recommends this race
2015
"El Guapo's 9th half marathon in 7 seven states. (43 states to go!!)" 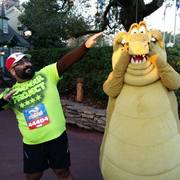 First half marathon of 2015 is officially in the books. This might have been the most fun I've had yet during the race course. I wasn't really prepared as I should of but I wasn't looking to PR. I just wanted to finish the race without injury and not last.

Flew in Thursday night via Frontier Airlines which was delayed two hours thanks to mechanical issues. Instead of arriving at 9pm the plane reached the gate at past 11pm meaning I wasn't going to get to my hotel room until after midnight. Finally arrived at the Coronado Springs Resort to find out the room was literally 1/4 of a mile away from the front counter. So there I go lugging my luggage at 1am, tired, smelly, and just wanting to pass out on the floor. Finally got to the room trying not to wake up my roommates as they were going to run the 10k portion of the Dopey Challenge in just three hours. Found my bed and just crashed only to wake up in a few hours to get ready to hit the Expo.

Getting to the expo was quite easy if you are staying at one of the Disney resort/hotels. Buses came 10/15 minutes in front of the hotel and it's free!!! The Marathon Weekend Expo was held at the Wide World of Sports Complex. They had the expo split into two main buildings with large easy to read signs to direct you on where to go. First was getting the bib. The process was easy enough that it only took five minutes tops even with the vast amount of people there. Then I was directed to the second building, the Josten's building. (yup the senior class ring company) That's where the meat of the expo was. Vendor's from all over were there hoping you would buy some impulsive items that you might have forgotten on the trip over or something you didn't know you had to have until arriving at the expo. The process of getting through the expo was a lot better than what I experienced from the Disneyland Half Marathon in 2013. I was very pleased to see there were a lot of official race merch to be had. I was able to purchase my half marathon pins. After looking around at more vendor booth's it was time to head back to the hotel, rest up a bit and hit Downtown Disney before turning in a Friday night and get ready for Saturday morning's half marathon.

4:00am on a Saturday morning came and it was time to get ready for the half marathon. We waited for the bus to take us to the E.P.C.O.T area on where the starting the line was. It was very chilly for what I expected weather in Orlando to be. Temps were going to be in the low 60's midway through my race pace. Turned out to be at least a mile walk to the corrals which was great because it gave me time to warm up on the way over. They had music blaring, people giving us words of encouragement and a bunch of other stuff to keep out minds busy.

I finally reached Corral I and noticed a lot of people dressed up as their favorite Disney characters. Always a highlight of these Disney races. Many of them really go all out. I took a look at the race course the night before and noticed 90% of it was going to be on the freeway. I knew there wasn't going to be a lot of people cheering us on like in Anaheim but I would be too focused to really noticed. The race started at 5:30am ish with the wheel chair division going first then the elite runners 10 minutes afterwards. It wasn't until somewhere until after 6:45 that my corral crossed the starting line. It was cool that each corral started with it's own firework start. So there I go running in my 9th overall half marathon.

With my lack of training I just wanted to be able to run most of the route and have fun. Before I knew it I was clicking at a 12 minute pace at mile six. I said to myself" I will run as much as I can until I see the first character photo op I see." Sure enough just outside of Magic Kingdom I see two of the main characters from The Nightmare Before Christmas. Stood in line for about 10 minutes, took my picture and took off running. Wasn't afraid about my time because I was just having fun talking with other people. Once inside Magic Kingdom we went through the part of the back of the theme park to be greeting by cast members waving at us with those big Mickey Mouse hands. Then we proceeded down Main Street towards the castle only to be directed to Tomorrowland. There I got my picture with Buzz Lightyear. I was smiling listening to the people cheering us on and listening to the Disney music from the theme park. I got to run through Cinderella's Castle which was pretty cool. By this time having stopped at every single character photo op I noticed I was now in the land of walkers. Even if I wanted to run at a faster pace it wasn't going to happen so I power walked, jogged, and ran whenever I could. Having stood for over 20 minutes to take a picture with Goofy I had the thought of actually coming in last on purpose at mile 11.

But when I looked back I noticed there were still thousands of people behind me. So I couldn't do that even if I tried. So I just enjoyed the rest of the race until I came up to E.P.C.O.T which I got to run inside for a bit. The park was already open to the public by then so they had several place roped off until there were no runners so they could pass across the route. There were plenty of photographers so I was pleased with that.

I finally saw the finish line and began to pick up my pace to a nice stride. I've always finished strong at each race and it wasn't going to change. I crossed the finish line tired, crusty with salt sweat and it never felt so good. Got my sweet medal on me and picked up my cool food box. Disney really knows how to organize a race. My main goal for this was to have fun and finish.

Disney races should be enjoyed at every second possible. Yes they are expensive but you really should get your money's worth. Talk with people, take pictures, listen to the crowd...the last thing on your mind should be your time. That can happen at the next race.