Write a Review
What did you think of the race? Share your thoughts! Write a Review
Riley Fickett recommends this race
2022
"Race Review: Walt Disney World Half Marathon 2022 ✨ Goofy Challenge Day 1!" 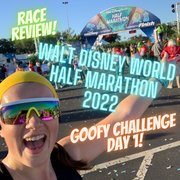 If you follow me on any platform, you'll know that I participated in the 2022 Goofy Challenge at the Walt Disney World Marathon Weekend back in January! I apparently can't shut up about it 😂 I'm going to break up my reviews into two posts as I have a LOT to talk about, but I'm here today to give you a review of my experience running the Walt Disney World Half Marathon - Day 1 of the Goofy Challenge! GAWRSH!

Before heading to bed I wanted to make sure I had all of my race essentials laid out. Brains don't work at the highest capacity at 2AM, so making sure you have everything ready to go before you go to sleep during a runDisney weekend is crucial 😂 For the Half Marathon my plan was to wear a Powerline inspired outfit! I wanted to have Goofy-themed costumes for the Goofy Challenge, and I was so excited to STAND OUT as Powerline for the first race of the weekend! ⚡

I unfortunately did not sleep to well the night before the half. The bed I slept in was in direct line of the air conditioning and I was too cold to fall asleep, but after putting on a sweatshirt and sweatpants and socks I was able to sleep a little bit. I did do the whole "wake up every 45 minutes because I'm certain I missed my alarm" dance until about 1:45am when I finally pulled myself out of bed to get ready and head over to Epcot for the race!

I was a little paranoid to get to the staging area in plenty of time. Folks who did the 5K and 10K were saying that security was taking a little bit longer than usual so I was out the door by 2:15am which was honestly aggressive now that I look back on it 😂 Needless to say I got to Epcot in plenty of time (probably around 3am), and I'm fairly certain our bus was one of the first ones to arrive to the staging area. I had a LOT of time to kill, so I took plenty of photos, took in the atmosphere, and even drank an entire iced coffee before heading to the corrals at 4:30.

I was in starting group 4 and I headed over to the corrals around 4:30am. It wasn't long before they started sending folks out, and I think I was on the road by 5:30 or so! Knowing that I had a few more starting groups behind me before the balloon ladies, I felt really comfortable taking my time with the run and stopping for photos whenever I felt like it. It was such a change of pace from 2020 Princess Weekend when I was in the last corral and constantly looking over my shoulder for the balloon ladies! 😂

Another magical moment was being able to get to Magic Kingdom before the sun came up. I had not been able to do that during Princess weekend in 2020 and I have always heard running down Main Street when it's still dark and the castle is lit is something else, and I have to agree. It looked SO beautiful.

I definitely took my time going through Magic Kingdom on Half Marathon day! For those unfamiliar, Magic Kingdom is roughly one mile of the course - between mile 5 and 6. When I checked my splits at the end of the race, my Garmin told me it took me about 31 minutes to run mile 6 😂 Very clearly I was having a blast playing in Magic Kingdom! ✨

Running back toward Epcot was also such a blast! Once the sun started to rise and I could really see all the runners around me, it really brought that sense of comradery that these events always tends to provide. I love cheering on everyone around me as we get into the later miles and making that final push toward the finish line knowing you're almost there is a feeling like no other. I'll also never forget the cast member that said to me "Welcome to Epcot, Powerline!" as I hit mile 12! ⚡

Before I knew it I was racing toward the finish line and I crossed with the biggest smile on my face! RunDisney was officially BACK and I was just so elated and grateful that I was running in Walt Disney World once again! 😊

I absolutely love the half marathon distance at Disney. This course was identical to the course I ran at Princess 2020, and I absolutely love it. Going from Epcot, through Magic Kingdom, and back to Epcot is the perfect 13.1 mile route in my opinion, and I would definitely do this race again whether it would be part of a challenge or just on it's own! Walt Disney World Half Marathon gets a 10/10 in my book! ✨