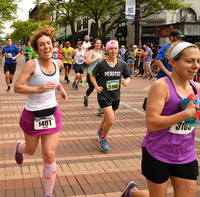 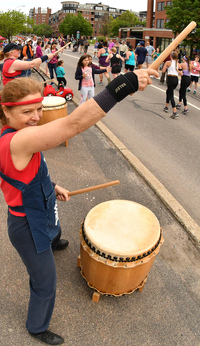 What did you think of the race? Share your thoughts! Write a Review
Rachel Drew recommends this race
2016
"You Will Feel Like a Rockstar" 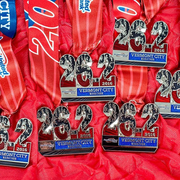 I have to start by stating that this year's race was not typical--for the first time in its history, the race was cancelled mid-way through due to extreme conditions. The Wet Globe Temp readings indicated that the heat and humidity at noon were too dangerous for runners, and official timing was discontinued. Temperatures were close to 90 F and the humidity was high.

It is my opinion that RunVermont did everything they could to mitigate the unfavorable weather. In the days before the race, they had added 9 extra misting stations, 5 extra ice stations, 4 roving ice patrols, more than doubled their ice order, ordered extra cups and water, extended the course time limit, and asked the residents of Burlington to help out by hosing down runners. All of this is in addition to their regular hydration/aid stations and pre-race preparations.

Expo: The expo was easy to get to and there was plenty of parking when I arrived at 4pm Friday. Getting my bib and race shirt was very streamlined and easy. There were plenty of vendors so any last-minute needs like Nuun, Gu, Shot Bloks etc were available, plus lots of great extras like 14th Star Brewery, Silo Distillery, and VT Smoke and Cure with samples.

Parking: I live in Burlington, so I didn't need a shuttle or take advantage of any host hotel parking. I arrived in the downtown area shortly after 7 am and was able to park within a half mile of the start line. All city parking is free on Sundays, so I didn't have to pay.

Start Line/Bag Check: The starting area was easy to navigate. Lots of porta potties, quick gear check, and plenty of water available, which was necessary on such a hot day. The corrals were well organized and well labeled, and the course was chip timed.

On the Course: This is a mostly flat course, with the only hills when you're going onto and coming off the Beltway (mile 3.5ish/mile 8ish), and the Battery Street Hill (mile 15ish). It's a fairly scenic course, running through neighborhoods, and along the bikepath with Lake Champlain views. The worst part of this race is the Beltway. You're running an out and back on a highway, fully exposed to the sun. There is one aid station that you pass twice in this section, and by the time I'd come back around, the aid station was completely out of both water and Gatorade. Spectator support for this race is INCREDIBLE. Every neighborhood has something going on. Residents of Burlington truly stepped up and had extra water, extra ice, extra snacks, live bands, cowbells, signs, and more. You will feel like a complete rockstar running this race. Burlington LOVES this race, and loves its runners.

I had just crossed mile 19 when we received word that the race was "cancelled" due to the extreme conditions. The race official at the Leddy Park aid station was telling runners that timing was being discontinued, that aid stations were being shut down, and that while we would not be prevented from continuing, we were HEAVILY discouraged from doing so. Due to that information, I elected to leave the course and take a shuttle bus to the finish area. I still received a medal, but since this was to be my first marathon, I was VERY disappointed. I also found out after the fact that the information I received at Leddy Park was incorrect; chip timing continued through the RaceJoy app (although no official times would be honored after the 4 hour 30 minute mark), and aid stations and the finish line stayed open for anyone who finished.

I spoke to the Marketing Director for RunVermont, and she was very apologetic about the misinformation I received and emphasized that all decisions made on RaceDay were centered around keeping runners safe, which I truly believe. It was a difficult situation for everyone involved. I do think that RunVermont has some work to do to make sure that emergency communications are handled better in the future, so that EVERYONE gets consistent and correct information on the course, but it's hard to plan for all potential scenarios. In spite of a disappointing outcome, I wouldn't hesitate to register for VCM again if I wanted another marathon attempt.

Thank you for your honest feedback Rachel We strive to keep our runners and volunteers safe and want each and every runner - whether it be their first or one hundred and frist marathon - to finish with a smile on their face. We have already begun working on a plan for improved/clear communication in case a scenario like this occurs again.
This plan includes scripted information that would go out to all volunteers and emergency personnel so that our runners get one clear message. We will also be adding at least one misting station on the belt-line to alleviate stress to the aid stations. Many folks were dumping multiple cups of water on their heads to keep cool and this left us without water for a short period of time.
The City of Burlington stepped up and supported our runners in every way possible and this is one of the things that make this race so very special.