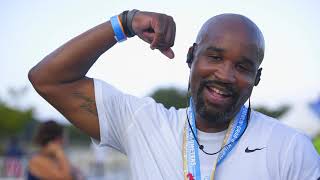 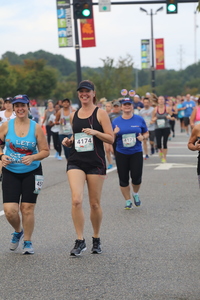 What did you think of the race? Share your thoughts! Write a Review
Christine Newton recommends this race
2019
"Awesome Race Weekend and a Perfect PR Course"

This was a perfect, family friendly race weekend with distances for everyone! My husband ran the 5k, my kids ran the 1k, and I did the half marathon.

Expo: The expo was conveniently located right in front of the race start line. The expo itself was small but had everything we needed: a couple of running stores for last minute gear purchases, and a few other local vendors and races being represented. Neighborhood Harvest was the main sponsor and was handing out samples and details about their local programs. The race merchandise for sale was really cute, and my kids were begging for one of the crab hats that we were seeing around town all weekend.

Packet Pick-Up: We stayed right across the street at one of the race recommended hotels (Hyatt Place). This turned out to be a fantastic decision for race logistics as we could literally cross the street to get to everything. We were at the start line within 5 minutes of leaving our hotel. We arrived late on Friday night so made it to the packet pickup Saturday morning, a little before the 5k start time at 8am. We had plenty of time to grab our bibs and shirts, and check out some of the merchandise. The kids also had their own bibs with corresponding guardian bibs if a parent wanted to run with them.

Course: The course was totally flat for all races except the 5k and half had an overpass that you crossed at the very beginning and very end. The half had one other overpass within the last couple of miles to the finish but it wasn't too awful. Everything else though was flat. The scenery wasn't too exciting but it was nice running through the various neighborhoods and along the waterfront on the second half of the race. It was a little windy in that instance but at around mile 9 right as you exited the waterfront, there was a popsicle 'station' where volunteers handed out otter pops. That was a nice little treat when I was struggling mentally to push the last few miles.

The aid stations were well stocked with water and gatorade. I only had one instance where I was handed water in a gatorade cup but another volunteer was right behind to hand me the correct drink. There was also at least one station where gu's were handed out. There could have been more but I may have just missed it.

I really appreciated the setup of the corrals as I felt that it was one of the rare instances in a race where I was placed with people in the right speed categories. I was in corral 3 and positioned myself to the back. I never felt excessively passed or that I was passing a ton of people. The course also wasn't overly crowded so I didn't feel like I had to dodge around people throughout; but I also had a decent group near me at all times. Overall, it was a great experience in that perspective.

Swag: The fun stuff! So at packet pickup, you also got a shirt for all race distances. At the finish line for the half I received a beautiful medal that doubles as a beer bottle opener, a silver reusable solo cup for all the free beer at the post-race party, the crab soup and biscuit at the same party, and a few other yummy treats including Wegman's popcorn and the obligatory banana.

The post-race festival was a lot of fun, and great for family or friends also there to cheer you on. You could buy food and drinks in addition to what your race bib tickets would get you, and there was a live band playing the whole time I was there on both Saturday and Sunday. There was patio furniture scattered throughout and outdoor games setup including frisbee, table tennis, and giant Jenga. My kids were in heaven and thoroughly entertained.

Overall, it was a great race weekend. I would highly recommend this course if you are trying to PR and the proximity to the preferred hotels was so convenient. J&A Racing put on a great event. I'm looking forward to checking out more of them in the future!