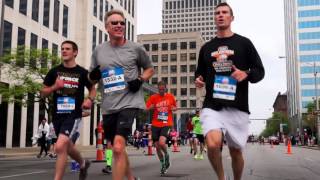 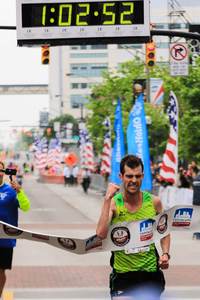 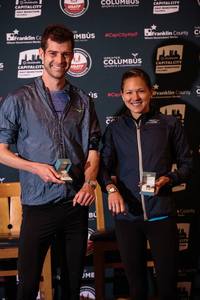 Write a Review
What did you think of the race? Share your thoughts! Write a Review
Catherine recommends this race
2017
"Splurge for the VIP package & make it a #runcation!"

Overall: I had way too much fun in Columbus for a girl from Ann Arbor. ;-) The VIP experience was one pleasant surprise after another. Packet pickup was close to the hotel (a short drive) and started with a glass of champagne in a private 'loft' at the expo. You can't beat skipping the line & starting with bubbly! The race hotel staff was super helpful too, and cute because they thought I was an elite. (In my dreams!) I did, however, meet one of the elites because it's a championship race, and that was super cool. I'm officially a Stephanie Bruce fan girl now. :-)

T-Shirts/SWAG: Love that the bag was reusable and not another plastic throw-away. The VIP package included an Adidas tech half-zip with thumbholes which I'll get a ton of use out of! (And it still had the $60 price tag on it, so you know you're getting value for your VIP ticket. ;-) The shirts we all got were comfy--I've just got a pet peeve about race shirts that blend into the pavement, so I'd vote for "anything but gray" in the future. And the medal--it's HUGE! If you're a collector, this is definitely a race to put on your list.

Aid Stations: The system requires a rating even though I can't comment because I ran with a hand-held to avoid needing to stop at aid stations...

Post Race Food: I feel like food deserves its own star rating, and this one would get 6 out of 5. Every runner got a ticket for beer, champagne, a margarita, and pizza. That's crazy! Plus, the VIP tent included catered breakfast and lunch! I don't know how a person could eat/drink all of that after a race. Unfortunately, I didn't even get to make an attempt to eat all of the foodz because the after party was canceled due to the weather. Next time!

Course Scenery: It was such lousy weather it's hard to say what the course would be like on a nice day, though we went through some cute, distinct areas of town so it feels like they did a nice job of showing off the town through the run.

Expo Quality: I'm not a fan of large expos you have to "wade" through; I just like knowing there's enough at the expo that I can cover any "last minute" (read "forgot-to-pack) needs. This expo was "just right" from that perspective. They had a wide selection of gear and apparel, though much of the apparel was Columbus themed. I feel like there's an opportunity there for more generic/fun running shirts. Personally, I splurged and picked up an Addaday massage roller that I've been hearing about on podcasts lately. Love it!

Elevation Difficulty: If there were any big hills I didn't find them on the shortened course (due to weather) that we ran. Talking to others, I understand this is a great race to PR on, and that would be true looking at my splits through all of the race we did get to run--I was PRing every intermediate distance according to Strava!

Parking/Access: We took the easy way out and used the valet parking for the hotel even though it wasn't cheap. We were coming and going a lot to the expo, out to eat for an anniversary dinner, etc. so the valet was a worthwhile convenience for our #runcation. It was also a huge bonus to be at the race hotel and pretty much walk out the front door to the race start. There are parking garages nearby, and the VIP package included parking if you were going to use the garages.

Race Management: I'm super impressed with the management of this race. From my hotel room I could see the park where they were setting up over the course of a few days--quite the orchestration to watch. They had good corral management and tons of porta-potties at the start (plus porta-potties in the VIP section if you did gear drop off there). I think they did a great job of herding people off the course quickly when the weather hit, I just wish they had started the race a little bit earlier to try to beat the weather. Nonetheless, it was very clear to me that it's a thoughtful and organized crew putting this event together. (A dedicated team, too--I ran into some of the event/teardown crew in the hotel after, and that would not have been a fun job but no one was complaining!)

Would I recommend? YES! I can't think of a better race for a #runcation with all of the VIP perks. It would be a great race to gather a couple of good friends and enjoy the most pampered half ever, together!