Write a Review
What did you think of the race? Share your thoughts! Write a Review
Heather recommends this race
2015
"Fun race, GREAT after party" 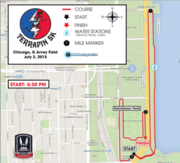 The final Terrapin 5k was held on Thursday, July 2 at 6:30pm. This was my first (and turns out only) year running this race, which makes me sad because I had a lot of fun. We ended up having AMAZING weather - possibly upper 60s or lower 70s, but it was lovely.

PROS:
+ Multiple days and locations for packet pickup – Sunday in Deerfield and Elmhurst and Thursday at Fleet Feet Old Town.
+ Race day packet pickup - this is what I utilized. There was no line, and I got my bib/shirt/hat quickly and easily.
+ Easy location to get to, either driving, running, cycling, or using public transit (South end of Grant Park in Arvey Field).
+ The party area was fenced in (gear check, packet pickup, beer and food)
+ Corrals/Waves helped with congestion.
+ Water station around mile 2.
+ Cups of Gatorade at the finish.
+ Lou Malnati's pizza and Magic Hat beer were the post-race goodies (Electric Peel & #9) - great pizza and beer make a nice post-race party, in my opinion :)
+ Band (Old Shoe) playing until 10.
+ Our group looked like so much fun, other people leaving early gave us their leftover beer tickets.
+ Fun themed race - nice way to kickoff the start of the holiday weekend.
+ The course was clearly marked.
+ I purchased my parking using SpotHero and was able to find a place within a few blocks for only $10 for 8 hours (not that I was there that long, but for Chicago parking, it's a steal!).
+ Runner tracking.
+ Chip timed.
+ You could purchase additional beer tickets for $5 each (cash only if you were buying at the race).
+ You were able to pickup friends/family packets - just needed their confirmation email from the race.

CONS:
- Getting into the city on the evening of a holiday weekend can be a pain, if you aren't already there.
- Thursday night races can be tough for some people to get to from work (I actually had to leave early in order to get there on time).
- No bottled water at the end of the race. I usually like to chug a bottle when I'm done, and I was pretty sweaty, so it would have been nice, but not a deal breaker for a 5k. Plus, they had craft beer, so I give them props for that... you know how most other races have gross beer (you know which one I'm referring to).
- I didn't use any of the packet pickups at the stores, but it seemed odd that the one on Wednesday in the city was only from 10–3. If it were only going to be a few hours, I feel maybe 2-7 would have been better for people that couldn't go until after work. However, I don't think its too much of an issue (my opinion) since they offered race day pickup.

I'm adding a photo of the course, since it's easier to see than to explain.

I was there with lots of time to spare before the race, so I got my beer wristband before the race, so I didn't have to worry about it afterwards. I think that as a good decision (not that it seemed like there were much of a line or anything, but one less thing to worry about). I had a lot of fun hanging out with friends after the race, I didn't leave until 9:30! If this race were to come back, I'd say register!!

You can read a more personal view of the day here: http://www.heatherrunsthirteenpointone.com/2015/07/ram-racing-terrapin-5k-recap.html