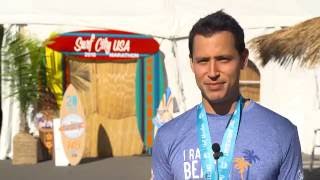 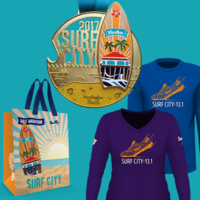 Write a Review
What did you think of the race? Share your thoughts! Write a Review
Fallon C recommends this race
2019
"Rain in Surf City?" 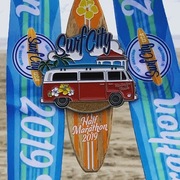 Registration -
was available online up until the Friday before race day.

Communication-
The race organization sent out at least one email per week leading up to the event and more as it grew closer, especially when it began to look the weather was going to turn on us.

Expo-
Due to the bad weather and flooded freeways I was unable to make it to the expo, it closed Saturday at 4. But I appreciate that Surf CIty would allow other runners to pick up your bib and swag as long as they had your QR code and a picture of your driver’s license. I wish more races did this.

Race morning-
There seemed to be plenty of port-a-potties available for runners pre-race and an announcer was trying to keep the energy up despite the less than stellar weather. I have run Surf City 3 times and this is first time it wasn’t sunny and warm.
The corrals are self seeded and I wish there was a little more regulation here, hardly anyone ever puts themself in the right corral. I placed myself in wave 4 as I knew I was going to be slower and it took about 20 minutes to get across the start line.

The course-
The route is primarily an out and back along PCH with views of the ocean. Around mile 2.5 runners turn up a street to loop a neighborhood for 2ish miles, that gives the course it’s only decent “hill” otherwise it is primarily flat. The neighborhood also usually boasts the most spectators outside the finish area, it’s a good spot to cheer on runners.

Aid Stations-
There were aid stations with water, Nuun and port-a-potties every few miles. They all seemed well staffed and were managing to keep up with the demands of the runners. One station had fuel- I think it was Honey Stinger Gels. There was also a medical tent just past mile 9 and the race was staffed with Race Guards- runners who were equipped to help with medical emergencies. This was the first race I have run that Race Guards available.

Swag-
The race gives runners a nice long sleeve tech shirt as well as a race themed reusable shopping bag. This years medal was a VW bus on overlaid on the iconic Surf City surf board.
There was also a variety of goodies given to the runners as we made our way through the finishing chute but I wish they had given us a bag.

Post race-
There is a beer garden and fun photo opps for the runners but I was cold and wet and just wanted a change of clothes so I headed to the car. Which I couldn’t find. Which leads me to-

Parking-
There are numerous beach parking lots available but on warm, sunny days they fill up fast. My car was actually in a beach lot this year (thank you rain) but it was still 2 miles south of the finish line and that’s the closest I have ever parked at Surf City. So be prepared for a hike post race.

Overall-
I love this race, I have run it 3 times now and even though I never seem to run it at my best, it is a great race that is worth running again and again. And that is coming from someone who hates flat races- Surf City is my exception. I will be back again.