Write a Review
What did you think of the race? Share your thoughts! Write a Review
Laura recommends this race
2014
"Rock 'n Sole Half" 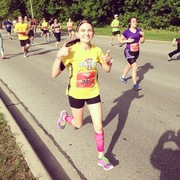 This year the route for the half was changed due to construction on the Hoan bridge, which is the main part of the course (Hence the tagline "take it to the bridge!") The new route ran from the south end of the bridge to the north end, where the 10K and the half split and the half went up Lincoln Memorial Drive and up to where Lake Drive curves. That area is nicely shaded with a few hills (including the massive, steep hill by Colectivo on the Lake) and had great course support from spectators as well as entertainment!

Aid stations were very well-spaced out and well-staffed with volunteers. They were very encouraging and had water/gatorade available quickly.

The expo was great. There were a lot of running-related vendors there including Performance Running Outfitters, one of the more popular running stores in the area. Rock 'n Sole also had a booth where you could buy additional official race merchandise, including tech shirts, headbands, and cups.

After the race, there is a post-race party that includes a free Miller 64 for the runners, food, and entertainment until 11 am-ish.