Write a Review
What did you think of the race? Share your thoughts! Write a Review
Crystal recommends this race
2017
"Calgary's Fastest Road Race!" 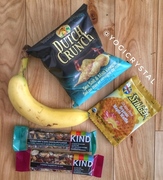 For those who don't know, the Sporting Life 10K is an iconic race that is held in Toronto every year in support of sending kids affected with cancer to camp OOCH. Obviously, this is a worthy cause, so approximately 20,000 people participate every year and get to run down Yonge Street (which I totally love). While living in Toronto, I couldn't coordinate taking part in the race for some reason (probably work), so I was really excited when they announced hosting the first 10K race here in Calgary once the Sporting Life location opened at South Centre mall. Another bonus was the race date, which was one day before my birthday and I've been starting a trend of running a race on (or around) my birthday to add some fun to ageing.

I registered months ago, but it was easily done online and I actually received a Saucony Canada coupon, as well as a coupon to Sporting Life as part of the race registration. They also offer you an opportunity to donate while registering, so I did that easily as well and received a tax receipt in no time.

Over the past few months, I got excited to see how this race would turn out and for the downhill point to point course. The last time I ran a 10KM race was in September 2016, so I was hoping for a solid PB to keep me excited and motivated for Seawheeze training.

Race kit pick up was super easy, there wasn't even a line when I went to the Sporting Life store. I was also offered another coupon to the store, which was great but I've been attempting to be on a budget for my upcoming Seawheeze trip. Plus, I don't REALLY need more running gear right now, do I???

As per usual, I did not sleep well the night before this race. Will that ever happen? But, I got up around 5:15 am so I could calmly do my usual pre-race morning routine and then I took the bus/c-train to the start. Honestly, it's pretty awesome that this race starts at a c-train station, it made getting there completely stress free. At the start were a good amount of portable toilets and the bag drop volunteers. Both of these processes went smoothly and then I wandered over to the start line. Now, here's a first for Calgary - this race HAD WAVE STARTS. There were only 2 waves, but still there were waves!! It still amazes me that Calgary Marathon does not have waves or corrals, because this race started much smoother than my half marathon in May. I didn't feel cramped or bottlenecked in any section. Now, I realize that there were a lot less participants (approx 1,000), but still, the waves were super helpful. I placed myself near the middle of wave 1, took some pics, warmed up and was ready to go.

The start went pretty quick, just a couple of announcements, someone actually sang O Canada, and then we were off! And yep, downhill right away! I had planned to run a 5:05 KM because I was aiming for around a 51:00 minute time (which would have been a PB), but right away I felt good and the downhill had me cruising!

Overall, I quite enjoyed the course. Mostly downhill, but definitely some flat sections and a few inclines. We ran down some pretty open roads in Calgary, which was kind of neat as well. My only issue with the route was that there were 2 spots where we had to run across oncoming ramp/turn-off traffic and there was no marshal or anything there guiding runners. I found this a little odd, especially because cars were coming when a bunch of us were running across, so of course we were waving and trying to make ourselves noticeable to oncoming traffic on a turn-off ramp. Running through downtown was also pretty cool and I really liked the location of the finish line at Olympic Plaza. I like it so much that I cruised across the finish line and then past the volunteers handing out medals! Needed a little more room to slow down and I noticed a few other people did the same thing.

After the finish there was a PB gong, which I totally took my turn to ring. And then, the post race snacks were awesome and gluten free again - chips, Kind Bars, Bananas, Gluten Free Honey Stinger Waffles. Run Calgary certainly gets the post race food right! (In my opinion, anyway. No bottled water though, so if you were really thirsty you had to keep going back to the snack line). There were also post race massages and both Saucony and the Kids Cancer Care reps were around to answer questions and tell you more about the race and cause.

Overall, I had a really good time at this race. It was easy to get to by transit, the course was fast, and post race festivities were nice. Hopefully they are able to keep running this course because it would be nice to see how I progress by next year! Plus, the race is for a great cause (Kids Cancer Care), so that makes it all worth it!

Cons
- Two sections running into oncoming traffic with no marshals
- No bottle water at finish
- Aid stations (one at 3K & one at 7KM) not great/fully organized (but I didn't need water, so I cruised by)
- No portable toilets on route for emergencies
- I heard the race caused traffic issues, but this is usually the case with any race