Write a Review
What did you think of the race? Share your thoughts! Write a Review
Heather recommends this race
2016
"Fifth Time Running, New PR Each Year!" 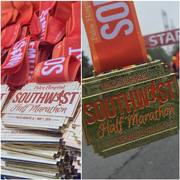 This was the 9th Annual Southwest Half Marathon held on May 1, 2016. Previously know as the First Midwest Half Marathon (see previous reviews here: http://www.bibrave.com/races/first-midwest-bank), it changed names in 2016 since it had new sponsors (no longer First Midwest Bank). The race director is Mel from Running For Kicks over on 127th and Harlem. Usually the race is the first Sunday of May each year.

This was my fifth year running, and every year I come back hoping to beat my time from the previous year. So far, I've been successful. This race also holds a special place in my running heart, as it was the first half marathon I ever attempted back in 2012. It didn't go so great, as I ended up being sick at the turn around point, but I come back every year in honor of that first time which started the running obsession ;)

Weather this year was in the mid-40s with mist most of the race + some wind + humidity + clouds. I personally enjoy 40s for running, so was good for me. Much prefer it over sunny and hot haha.

PROS:
+ Chronotrack registration this year.
+ Early bird pricing.
+ New packet pickup location at Shepard High School (part of the Business & Health Expo - nothing super exciting, in my opinion as it's mostly health care booths. We were in and out pretty quick). At pickup there's an alphabetical list of runners - find your name/number and then go over to your number line (i.e. 100-500). Shirts were a different line nearby. Was 9am–3pm and I believe race day pickup was available starting at 6am, though it was strongly encouraged for you to pickup at the expo. Friends/family were allowed to pickup for you.
+ Could register at packet pickup (not on race day).
+ Swag at pickup included a long sleeve tech shirt (those ones that feel like cotton but aren't - they're nice - I feel I have so many short sleeves so glad to add a long sleeve to the collection) and a pair of Feetures socks (size M for women and L for men - choice of 3 colors for women - not sure what it was for men).
+ Race parking is pretty easy - allowed to park in any of the lots of the local businesses. Volunteers helped direct you where to go. This was the closest we've ever been - only 1/2 a block away. Also, FREE. Yay!
Race location: City Hall in Palos Heights, IL (Rte. 83 & 76th Ave.)
+ Gear check opened a 5:30am.
+ Half start at 7:30 and 10k at 7:40.
+ Mile Markers and Clocks.
+ Bib Chip Timing.
+ Plenty of aid stations (8).
+ 4 hour time limit (approximately 18 min/mile pace).
+ Gatorade and water at all stops. Though the cups were the same, volunteers were very good about letting you know what they were holding.
+ Porta-potties at the start and at most aid stations.
+ Course is an out and back. Mostly flat, but a few small hills and one larger (the overpass). I think I counted 3 hills, so with it being an out and back, 6.
+ Pacers: 1:38, 1:40, 1:45, 1:50, 1:55, 2:00, 2:05, 2:10, 2:15, 2:20, 2:25, 2:30, 2:35, 2:40 and 2:44 (they held signs so you knew where to line up if you were using them).
+ Finish line included your medal, bottled water, cups of different flavors of Gatorade, and different flavor Gatorade (and G2) in bottles.
+ In the post-race party area there were apples and bananas.
+ Live band at the after party.

CONS:
- Again, the expo isn't anything exciting, but it is a local running store that puts on the race, along with sponsors, so honestly no biggie to me. If I want running gear I could just stop at the store. I think it works well for them that they have paired up with local towns for the Business and Health Expo.
- There isn't a ton of race communication - I don't think I received any emails regarding the race other than my race confirmation. However, you could just go to the website and find what you were looking for. They also gave you a parking map in your expo bag, so again, not a big negative in my mind, but I always like to mention anything I can think of that others might be interested in knowing.
- The scenery isn't super exciting. It's mostly just running down a road with forest on each side. In a way, I think that helps you run faster because you aren't distracted by looking at pretty lakes or buildings. My personal opinion is that if I'm running with forest on each side of me, I'd rather be on the trails than the road ;)

As you can see, there really isn't much negative to say about the race, just a few nit-picky things I felt worth mentioning for those thinking about this race in the future. I try to be as thorough in my reviews as possible :) Even though there isn't a ton of communication via email, you can like the race on FB and get your info there, or from the website. The RD is pretty good at responding to questions on FB which was good. I feel like it's an organized race - parking isn't a hassle, packet pickup is easy and quick, and they start on time. It's a smaller race, so corrals/waves aren't really necessary. I plan on making 2017 year 6!