Write a Review
What did you think of the race? Share your thoughts! Write a Review
Henry Lato recommends this race
2019
"Soldier Field 10 Mile" 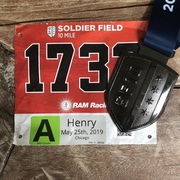 The Soldier Field 10 Mile was a great way to kick off my Memorial Day weekend. The race was produced my RAM Races who always do a great job with putting on there races and keeping them fun and organized. That is exactly what this race was with its scenic course and its location which allowed you to “finish on the 50”.

Packet Pickup:
I picked up my packet at Fleet Feet Old Town. I picked it up the Thursday before because I knew that on Friday there would be a line out the door. Thursday’s Packet Pickup was fast and easy. There was a bit of a line but thanks to the kind and helpful volunteers and staff it moved quickly. At Packet Pickup I received an SF10 tee shirt as well as my race bib. Overall Packet Pickup was well organized, fast, and easy.

Weather Updates:
Severe weather was expected on the morning of the race. RAM Races was great about keeping runners informed about what was going to happen because of the weather. We were updated about every hour about the weather the next morning but because the forecast changed every hour the race was able to go on. Luckily the forecast was wrong and there was no severe weather on race day.

Pre Race:
I arrived at the race at around 6:00 am (45 minutes before I had to get in my coral and an hour before start time) It was crowded but because the race was a Soldier Field there was allot of available parking. When I got to the race site there were long lines for restrooms. There were not enough restrooms outside the field which resulted in long lines but I later learned that there were more inside. After waiting in that line I had a little time left to stretch and warm up before entering the field were the start line and the corals were. In the field runners were able to enter in one of three gates based on there corral. Spectators were also able to enter though a separate gate. There was a long line at the gate which resulted in people almost missing the cut of Of there coral. Lucky I made it. The race stated with an opening ceremony with soldiers performing the casing of the colors ceremony, a speech from a military mother, and the national anthem. It was a great opening ceremony that honored those who served.

The Race:
The race started by immediately running out of Soldier Field and on the course. The path that led us out of the stadium was wet and slippery because of the humidity which forced everyone to take caution and start the race out a little slower. After exiting the field you were taken though the McCormick Place tunnel and then on to Lake Shore Drive South. We ran south for a few miles before going on the turn around and running back towards Soldier Field on the Lakefront Trail. The race had a scenic course with views of the city and the lake. Many ade stations were on course stocked with water, Nuun, Cliff Energy Gel, and medical services. I felt that there were a fair amount of ade stations on course but it would have been nice to have a few more as it was hot and humid. At the end of the race we were taken back into Soldier Field before “finishing on the 50”.

Post Race:
After “finishing on the 50” you were given your SF10 medal to celebrate your accomplishment. You were also given water, a Nuun tablet, and a goodie bag with a protein bar and other post race snacks. After the race you were escorted out of the field to the post race party. The post race party had many vendors, live music, and an area to stretch and ice after your 10 mile run.

Overall The Soldier Field 10 Mile was a great race. It was a well organized event and a fun way not only to kick off your Memorial Day weekend but also a great way to help and thank those who served. It was a fun race with a great course and I will definitely be back next year!