Write a Review
What did you think of the race? Share your thoughts! Write a Review
Jeannine Avelino recommends this race
2017
"Better than last year!" 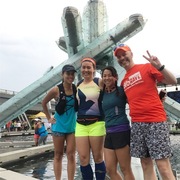 Visit my blog for a more in-depth review: http://everythingbutweddings.ca/2017/08/recap-seawheeze-half-marathon-2017/

Registering: This itself was a race on its own. If you're not quick with the refresh, you're not getting in. I managed to get in, thank goodness, but I know other people had problems with check out and ended up not getting their entry. Hopefully next year the glitches won't happen. The price went up unfortunately but if you plan on taking in all the festivities and grabbing everything that you can get that comes with the race, it's worth it. What's great this year is that they allowed transfers up to a certain date. It was way easier to get rid of an entry if you're injured and the replacement runner can run under their name.

The shorts: I wasn't a huge fan of the shorts design this year. Lululemon had vibrant shorts designs in the past and I was disappointed to get a black and white pair. It's still the shorts I like though so that's fine, I still wear them. Although I did notice that they fit smaller and are shorter than last year's pair (I got the same size).

Exclusive online sale: New for this year, runners were given the opportunity to buy from a secret online store, a limited number of merchandise. I managed to get a pair of speed shorts in a nice pattern but I heard others didn't get too lucky. Apparently the link was leaked and non-runners managed to buy merch as well. Perhaps Lululemon can fix this so registered runners will have to log in to access the sale.

Prewheeze/Package Pickup: November Project had a pop-up workout the morning of package pickup so I went to that and had a blast. I didn't line up for the showcase store this year because people have started camping out for the store 2 days in advance. There's no way I was going to get in so why bother. I decided to go on my lunch break instead. There were 2 lines, one for package pickup and another for the store. The lineup for package pickup moved quickly and I received my wristband, gear bag, water bottle, a tube of Nuun and sunglasses. I then went to the store (no lineup) and managed to get something I wanted despite the lack of merchandise. There were still lots of shorts, tops, and bags but in the not-as-popular colours and patterns. I heard the rainbow reflective gear were the first to sell out first. As usual there were vendors out at Jack Poole Plaza giving out free samples and all the free yoga sessions were held there too.

Race Day: I thought it was better this year. Last year my complaint was that the on-course entertainment seemed lacking but this year they seemed to have stepped it up. Check out the blog to see my favourites... there are lots to list.

Medal and swag: I loved the medal this year. It's a cairn, a stack of stones. It's hefty and doubles as a bottle opener apparently! There were no hats this year since they splurged on the gear bags instead. That was a bummer, I liked their hats. The Saje pouches were not handed out on the way to the breakfast line this time. You had to pick it up from their booth and from what I heard, they ran out/other people took more than one. That's not fair for back of the pack runners and I hope they would just hand it out at the finish line like they used to do. The breakfast was great this year and easier to get to. The line was very organized and it was literally grab and go rather than chase someone down for a meal (like last year). I loved the banana bread and fruit combo this year... much better than the breakfast sandwich.

Sunset Festival: I didn't get to go this year since I had more training in store for me the next day but I heard it was awesome.

Would I do it again? Yes I would but it won't be the end of the world if I don't get in, since it's so expensive. It's a great destination race though and I highly recommend that you go and try it out. The course is not too challenging... some hills but mostly flat and very scenic. You'll love Vancouver!

The Glacial 50 is run pretty much entirely on a portion of the Ice Age Trail (which runs in total...