Write a Review
What did you think of the race? Share your thoughts! Write a Review
Crystal recommends this race
2017
"Hot Half Marathon!" 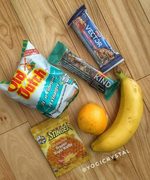 I'm not sure what it is about the Calgary course, but my quads never hurt this much after any other race. I honestly think that my quads hurt more after yesterday's half marathon than they did after a marathon.

Anyway, Calgary Half Marathon. What a day.

It was a very nice morning, cool air and sun rising, which made for a nice start to the race. I live pretty close to the start line, so I walked over feeling relatively calm and chatted with another gal while walking. She was very excited for the race, which boosted my excitement so it was nice to chat with her.

Calgary Marathon uses part of the Stampede grounds and the Grandstand for the pre and post race festivities. It's nice because it's a pretty open area and then there's also flush toilets to use if you're not in the mood for portable toilets. They also have a few booths around where you can buy or check out some stuff and also Jugo Juice there with smoothies at the end. I went and checked my bag right away (yes, I checked a bag. I wanted to exchange my race shirt size) and was able to line up for the washrooms pretty easily. If you'd like a guaranteed shirt size, sign up early. I signed up about 4 weeks in advance and there was only Large and XL shirts available for women to choose during registration. Honestly, this is the first time this has happened to me, so I found it odd. Luckily, I arrived to the shirt exchange at the right time and was able to trade for the last Small available. The shirts were cute this year - different, for sure - and more exciting than last year's bland shirts. So, I wanted one I could wear. (I'm one of those people haha)

After the washrooms, I went straight to the starting chute to get in position. I arrived a little earlier this year after last year's debacle, which was nice for my nerves. I thought we would hear the national anthem because of the Canada 150 celebrations, but we did not. (Apparently they did play a recording of the anthem that people in the front could hear, but I thought someone would sing it.) They had a few announcements and a moment of silence (which I also couldn't hear and I wasn't that far back) and we were off! Again, my biggest pet peeve with this race is that the 50KM, 42.2KM, and 21.1KM all start at the exact same time with no waves. This causes chaos for about the first 5KM of the race at least. People running into each other, having to dodge and weave through people, and bottlenecking in some areas. The start of this race is not really that fun. Also, they lay out pylons to mark the tangents for the elites, but these are hard to see in all the chaos, so I saw so many people running into them and falling because you can't even see past the person in front of you when making turns, etc.

Once the 21.1KM separates from the 50KM & 42.2KM runners, then the course opens up a bit more (this was around 6KM I think). Then you can start to focus on your pace and getting into a rhythm. It was a gorgeous morning, so I tried to focus on the nice weather and just the general atmosphere of race morning. I tried to run with a pace bunny group, but they were hard to keep track of in all the crowds. So, I just tried to go at a good pace on my own and not run into people.

Overall, the course was pretty good. Straightforward, you knew what direction to go and there were plenty of volunteers and course marshals out letting you know the turns. There was also plenty of crowds and people cheering, which was really nice. Once again, the Calgary Lululemon crew really stepped up their cheering game and presented one of the funnest cheer stations of the race. This was especially nice around 19KM when I was really starting to feel the struggle in the heat. Two years in a row now that this race ends up getting hot - good & bad when you consider the alternative that you get in Calgary in terms of weather!

There were also tons of volunteers at the end handing out water and snacks, and I think I thanked each one of them twice. I do like the post race food kit that you get from this race since I am gluten intolerant. I hope they continue to do this because it helps that I can actually eat something at the end. Chips are the best at this time, really.

I sort of deliriously walked through the finishing area and back inside the Grandstand where Jugo Juice was giving away free smoothies. This is also great, because it was so refreshing after running in the heat. Afterwards, I went and tried to find friends and congratulate them after they crossed the finish line, which is relatively easy to do since the finish line is inside the Grandstand so there are places to stand and sit after the race.

Overall, another fun race at the Calgary Marathon. I wouldn't say this is the best course to PB or BQ on, especially if the weather is hot. Also, you still have to arrive early to really be settled at the start on time - especially if you like to line up in a certain spot or with a pace bunny. Post race is a good time and I felt like there was plenty of volunteers to help you through your day, which is nice. A HUGE thank you to the volunteers and Calgary Police Service for working hard on a Sunday morning!!

Pros:
- Local race of relatively good size, so there's some excitement to the whole event
- Great pre and post race festivities
- Finish line in the Stampede Grandstand which is cool when crossing the finish line and also for watching others cross
- Great post race food, mostly gluten free items
- Better shirt this year than last
- Expo is a good size, but could use a few more vendors
- Lots of volunteers around for the expo and race day
- Indoor toilets available race morning
- Good amount of water stations for the half marathon distance
- 150KM race option very exciting for this year & Canada 150 celebrations
- Half Marathon championships held here again

Cons:
- 50KM, 42.2KM, and 21.1KM all start together at 7:00 am with no waves or corralling - very busy, kind of chaotic for about the first 5KM
- Shirt size not available 4 weeks before race... luckily I was able to exchange
- I heard there were some course issues for the 10KM race & complaints about that race starting at 11:00 am (too hot by that time, same for 5KM start at 1:00 pm)
- No race related gear available for purchase - same as last year, when I would have really liked to buy something to commemorate my first marathon
- Pylons on street that were hard to see in crowds, which caused many people to trip and/or fall