Write a Review
What did you think of the race? Share your thoughts! Write a Review
Vanessa Junkin recommends this race
2019
"Well-organized, flat and fun race! Had fun as coach!" 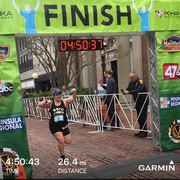 This was the second running of the Salisbury Marathon, Half Marathon and 5K (RunSBY Events), and I thought the race went very smoothly! This was my first time participating in my hometown race, and I ran the full marathon.

I was extremely excited to run a flat marathon after running a few full marathons that I traveled for that were hilly. While there are some slight inclines (such as two overpasses and coming out of a small tunnel under Route 13), I doubt they would be noticed much by anyone who lives in a hilly or somewhat hilly area. With the elevation correction (my watch has been off recently), there were only 202 feet of elevation gain over 26.2 miles.

There were tons of water stops along the course that had friendly volunteers with water, Gatorade and fuel (fuel was at some stations). There were also numerous timing mats throughout the course, and people could track runners using the Race Day Events app. Runners were also emailed an Athlete Guide that could clear up any questions about the race.

I enjoyed the flat course. The course covered many country roads, particularly the second half of the marathon course. Although the last several miles were the toughest for me (this didn't have anything to do with the course, but the distance wearing on my body), I do enjoy running on Riverside Drive along the Wicomico River.

This race still has room to grow in the number of runners, as it is only in its second year. The half and full marathoners were together for about 10.8 miles before the half marathoners turned toward the finish and the full marathoners went to run another loop. I ended up running the race in 4:50:42, so I was near many full and half marathoners for the first 10.8 miles. There were 360 people who ran the half. There were 192 people who ran the full marathon, so after that split, we spread out a lot more (the winner ran a 2:42 and the last finisher was just before 8:00). The cutoff is 8 hours, so people have to keep up an 18:30/mile pace or faster.

Runners for the full, half and 5K each received a short-sleeve tech shirt and a medal. There were some basic food offerings at the end (bananas, oranges and granola bars), and each runner received two free beers from Evolution Craft Brewing Co. There was also a domestic on draft. As a craft beer fan, I was excited to have craft beer at the end. There will also be free photos — I saw one photographer on the course near the end.

I actually ran to the start from my house because I live so close, but I'm giving parking/access a 5 because parking in Salisbury is rarely difficult, and it's free on the weekends. I saw plenty of parking available in the park near the start, although it was recommended for people driving in to park downtown in the parking garage and take a shuttle about a half-mile over to the start.

One cool aspect of this race that I got to be a part of was serving as the RRCA coach and writing training plans for the half and full. I provided these plans and also checked in with the runners each week on the Facebook group (https://www.facebook.com/groups/2020314311530827/). I got a free entry through this.

I definitely plan to participate next year, although I have not decided whether I will run the full or half because I like to switch up my fulls. Also, for those faster than I am, the race is a Boston Marathon and New York City Marathon qualifier.