Write a Review
What did you think of the race? Share your thoughts! Write a Review
Angie Maske-Berka recommends this race
2021
"Run for a cold one" 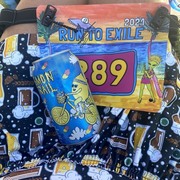 Registration: Available online, until race day. The price tier was spelled out on the website, topped out at $50. Included was a short sleeve tech shirt, a post race beer, timing chip and pint glass.

Expo / Packet Pick up: There was no expo. You could pick up your packet starting the Thursday before at the local running store and then at the brewery on Friday and Saturday morning.

Pre-Race: There were 2 events taking place, and each race was at a different start time. So as each race started there were announcements and music on a loud speaker.. The 10k started at 8:45, with the 5k following at 8:56. There was a bank of port-o-potties set up. Parking was available on the street in the surrounding areas. The race encouraged parking in a specific ramp (3 blocks away) and it was free!

After an instrumental version of the National Anthem, it was time for the rolling start. A group of 10(ish) people were told to approach the starting line, encouraging the speedier participants to approach first. When that group got to the top of the hill (yes it started with a short uphill) the next group was to go. It was a combination of encouragement from an announcer and people just lining up in groups and going. It appeared to work well, no clustering. However, people do not pay attention and the 5k walkers were starting with the speedier 10k runners. When all 10k people were through, then the rolling start of 5k runners did the same.

Race / Course: Both courses started at the brewery, both being some version of a loop. The 10 split off and went around the lake. Each had some out and back sections.

-paved / asphalt
-roads were closed to traffic
-little to no spectators
-photographer at the start/finish
-one water stop for the 10k about mile 4.
-relatively flat
-Police at all major road crossings
-don't recall mile markers

Finish / Post Race: An Arch, timing mat, clock and announcer greeted people at the finish. The post race food was splayed on a table - bananas and granola bars. There were tubs of water bottles iced down. There were trash receptacles. There were 3 beer choices, a volunteer marked your bib and gave you one of your choice.

Results were posted on a TV screen from the race timing trailer, awards only for overall finishers.
There were tables set up in the brewery parking lot in addition to the outside brewery space. Plenty of room for everyone to have their space. The brewery also had breakfast burritos for sale.
There was a stein holding contest after the race.

My race: I was looking forward to my 2nd in person race in over a year, plus there was beer at the end. I was also a week out from a marathon, I didn't have many expectations but to just enjoy the race.

During the announcements it was noted there were not many 10k runners. Many thoughts ran through my head, but I knew I just had to run my own pace.

I really had an uneventful race. I was familiar with the course as it's part of the Des Moines marathon. As the temperature warmed up I think struggling with the heat was my only problem, which was minimal as I have been training in it. There was only one water stop, and I say it all the time, should have brought my own hydration.

I came to the finish line and felt good. close to an hour and a great for me pace. Anymore that is the goal, feel good when I am done. When I checked my results, I was third in my age group.

After the race it was nice to enjoy race day atmosphere again. We watched the stein holding contest and took it all in.

Overall: I think this race was a good combination of an actual event and still following what remains of CDC guidelines. The feeling of race day was there, but more laid back. I've actually run a few events by the same organization, and I will say I might like this one the best so far.

It's really hard to write a review in this time of current events. In Iowa the guidelines were dropped so fast, yet at the same time events couldn't make the same changes. I would suggest registering early to save on the price, but it's a laid back event with a chance to still be competitive.

Running with the Devil

This was hands-down the hardest half marathon I've run to date. The terrain was hilly, the co...