Write a Review
What did you think of the race? Share your thoughts! Write a Review
Heather recommends this race
2016
"New race management, still a great race" 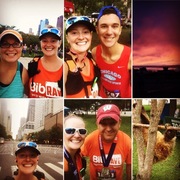 Run Mag Mile is what used to be Magnificent Mile Women's Half & 5k (reviews here: http://www.bibrave.com/races/the-magnificent-mile-chicago-women-s-half-marathon-5k#.V9Xd5zu7ln4). RAM Racing took over this year and made some changes noted below. The race took place on Saturday, September 10 with a 7am start for both the half marathon and 5k.

PROS:
+ Multiple locations and days for packet pickup. Fleet Feet Deerfield on Thursday from 3–6pm, Fleet Feet Elmhurst from 4-8pm, and Fleet Feet Old Town on Friday from 10a–8pm. Also an option for packet mailing (could add onto your registration I think 2 or 3 weeks prior to event) which cost $15.
+ Paclet pickup was easy breezy - just have them scan the QR code from your registration email (they also sent out an email a few days prior with the code as well).
+ Friends and family could pick up for you - just forward the email with the code,
+ Goodie bag included your bib, Lara Bar, long sleeve tech shirt (pink for women and blue for men), and a chocolate bar if you were within the first 1,000 registrants.
+ Great post-race snacks - a brown bag from Corner Bakery which included napkins, mayo packet, chops, and a deli turkey sandwich, Luna Bars, bottled water, and Eli's Cheesecake. Yum.
+ Plenty of communication about the race, and all the info needed was on the website.
+ Race corrals A–D with about 2 minutes between each.
+ Easy to access the race start. Parking available at the Grant Park / Millenium Garages or you can use Spot Hero or an app like that to find parking cheaper in the area. CTA also makes it easy to access the race start/finish.
+ Live runner tracking.
+ Plenty of on course aid stations with medical stops and bathrooms. Each stop had Water and Nuun,
+ Clearly marked course (at the 5k and half split there were volunteers and signs to point the way).
+ The course started on Columbus and Congress, north to Randolph, West to Michigan Ave, North on Michigan Ave with a turnaround near Superior, back to Randolph, which lead the half to the lakefront path, down to about the 8.5 miles and then a turnaround back to the finish line on Columbus.
+ Running down Michigan Avenue and the Mag Mile is pretty cool. Running on the street the first 2 miles helps with congestion and plenty of space for all runners. I wish we got to a run a bit longer down the Mag Mile, though, I'm sure it's tough to get permits to shut down the street that far north, though.
+ I heard someone say there were about 2700 runners (not sure if that was half only or combination of half and 5k). It was good that it was smaller, since the out and back was on the same path, which could have lead to some congestion, but it wasn't bad due to the not huge number of runners (no McCormick Tunnel - that's always nice).
+ Names being announced at the finish line is always exciting.
+ Medal was almost the size of my hand! Large and I liked the design.
+ Post-race party included tents from Brookfield Zoo (which had an adorable sloth and a snake), The North Face, Athletico, and a few others.

CONS:
I really can't think of anything negative about the race. I had a good time.

OTHER:
• No race day packet pickup.
• Originally it was a race geared towards women and this year with new management they opened it to all and gave the name a revamp. While I'm happy to have a race for everyone, I sort of missed that camaraderie and women empowerment that came with the race, along with a woman running celebrity (the past two years it was Lauren Fleshman - super awesome).They did fun runs and speakers scheduled during the expo hours. There was just something really special about having thousands of women running together :) In the Other list because it was still an awesome race and I really, I just love an organized race with good food at the end haha.

It's a fun September race and I'll continue to keep it on my calendar for upcoming years. I didn't have a great race personally, but still finished and enjoyed myself. It was great to meet up with runner friends, as always, and to run with my mom for the second half of the race. More personal details to come in a blog recap, which I'll post here when it's done :)