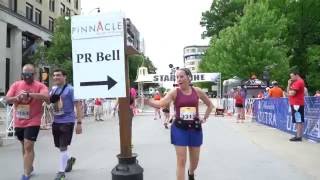 Thinking about running our race? Just read the reviews!

What did you think of the race? Share your thoughts! Write a Review
Angie Maske-Berka recommends this race
2018
"Toasty 10k "

Registration: Participants were encouraged to register online before it closed a few days before the race, there was registration available at the expo. Included was a bib with your name, finisher's medal, timing chip, post race beer, short sleeve gender specific soft shirt, and free race pictures.There was also a phone app, Race Day Events.

*the race is part of the Conquer the Capital Challenge, which would earn you an additional medal if you ran the half marathon the next day

Expo/Packet pick up: The expo was held at the Monona Terrace convention center. Parking was on-site in a ramp for a fee, or at a metered spot on the street. With the proper information someone else could grab your packet. Expo closed 3 hours before the race. There was a place to check that the timing chip worked on the bib.

The expo is simple and small. However there were area running stores, race information, sign making stations and information for other local races. There were even water coolers provided with cups to keep hydrated.

Pre race: The race started and ended at the Capitol. The 10k start was after the 5k and the wheelchair start. The National Anthem was sung. There were no corrals inside the gated start. Port-o-potties set up, but near the finishers area, so a short walk away. Parking for the race was to be found in area ramps or on street (which was free after 6pm.)

Race/Course: The course was all on paved streets in Madison, highlighting some of the "sights"
-Elevation - Madison is not flat, and this race many climbs.
-Aid stations - A couple stops (can't remember if there were more than 2), 1 with Gatorade (it was offered after the water.). Always in paper cups
-Scenery - passed near Camp Randall, the Kohl Center, Observatory hill area overlooking the lake at sunset -gorgeous views
-Photography - FREE race pictures posted online quickly
-Course Markings - Each mile marked with a stand that said the mile. A clock and timing mat set up half way. Law enforcement was at all major intersections. As this is a night race, I feel some areas could use a little more lighting - like the bike path.
-Terrain -The course is on all paved surfaces. Some areas with potholes, some just recently asphalted - kept their heat from the day.
-Volunteers - everyone was cheering and shouting for you. They were at all the intersections.
-Spectators - The course was not lined with people, but there was a scattering of people cheering for their friends and family.

Finish/Post race: The finish was easy to spot, as the arch and timing mats were visible. The announcer was reading the names as participants crossed the finish line. Once across the line a volunteer placed a medal around your neck, and then another handed you a bottle of water. There was pizza slices, followed by the coldest chocolate mile. The actual post race party was on the otherside of the Capitol where you could redeem the ticket on your bib for a free beer.

Overall: This is great option for a night race, you can grab your bib by 5pm and then check out Madison before the 8pm start. It is hard to decided what to eat when. It's priced similarly to other area 10ks and is organized well. I just wish they had something other than pizza post race, even just a banana.

My Race: I was in town for the Conquer the Capital challenge. I had a half marathon the next day, so I was running to finish. I did have a decent time near 1:02 despite the warm temps. I don't mind some hills, and this race has them, so just be prepared to run them. The start also seemed a tad crowded, but I guess you will have that with a successful race. I noticed the course was altered a little around Camp Randall, which isn't bad, just different. Also I think as hot as it was and with the additional attention on the heat, there could have been more Gatorade on the course and even some at the finish.