Write a Review
What did you think of the race? Share your thoughts! Write a Review
Ciara Doll recommends this race
2021
"A Finish To Make the Sports Fans Jealous! " 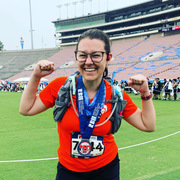 This half marathon offers a challenging, yet forgiving course that hits the highlights of Pasadena and ends with an unforgettable finish line on the field of the famous Rose Bowl Stadium!

Pre-Run:
I signed up to run this race with my frequent racing friend, and this was our first time running any sort of race in Pasadena. This race was originally set for March, but was moved to September due to COVID. Typically, this race offers an expo, however the race directors opted to have a much more socially-distanced bib pick-up, occurring over numerous days and in multiple locations, forgoing the traditional expo atmosphere altogether. My friend and I went to pick up our bibs Saturday at the Rose Bowl Stadium pick up spot, and we were in and out in under 5 minutes. I was surprised to discover that, unlike previous years, we did not receive a shirt with our registration. (The website explicitly mentioned a shirt, so perhaps I might have missed them, but if I recall, I didn’t see anyone wearing a 2021 shirt at the race. The medal and bib design this year featured a beautiful, subtle vine and rose pattern; it's a shame there wasn't a shirt to compliment this cool design this year.)

On race day morning, we arrived following Google Maps, and discovered that, if you are coming from the west, all the major streets and ramps were completely closed. We anticipated that this would happen, however, with Google Maps obviously unaware of the closures, we were expecting to see police or signs directing us to the stadium. Instead, it seemed like most cars didn’t know where to go, and many people were making turns and circles all over the place in an attempt to make it to the stadium. We happened to spot a cluster of cars we kept seeing, and decided to follow them. Luckily, we were able to make it to the stadium parking lot in time, but we only had about 5 minutes to spare… a little too close for my comfort! I’d recommend building in extra time here, as the lack of signs can leave you circling the Rose Bowl area for a while. Once you make it to the stadium, there is plenty of parking available (for free!)

The Race:
As previously mentioned, this run was supposed to occur in the spring, but pushed to September due to COVID. September is still very much the summer season here in LA, and after running a SCORCHING Surf City two weeks prior, I was fully anticipating a hot and sticky run. Instead, we lucked out and wonderful, cool and overcast skies – the best weather a racer can hope for!

This race had two distances: the 5k and the half. Both races started at the same time, with a divided starting line. The 5k runners made a right just after the starting chute to loop around the Rose Bowl, while the half marathoners ran south on Aroyo before turning left and climbing the biggest hill of the course up California. Once at the top of the hill, the course starts to level out (relatively speaking), turning north on Orange Grove (running past the beautiful Tournament of Roses office). Around mile 3, the course turns down Colorado Blvd, running past Pasadena’s postcard-perfect shopping district. The course makes a short down-and-back down Arroyo Parkway, returning north and continuing east on Green St. After two short down-and-backs down Lake Ave and Wilson Ave (passing CalTech along the way), the course returns along this same route toward Orange Grove. The course then continues straight, crossing the Colorado Street Bridge (movie buffs may remember this bridge from La La Land!) and overlooking the landscape below. The course at this point starts to make a decline back down toward the Rose Bowl, finishing out the last three miles with a full loop around the golf course and ending on the field of Rose Bowl Stadium!

This course had plenty of water and medical stations, as well as an abundance of restrooms. Every single water station also had Nuun on hand. There were SO many spectators, running clubs, and organizations out to cheer on the runners! There were even a few music stages set up, complete with DJs and rock bands to entertain runners on the course!

Post-Race:
While basking in the thrill of finishing on the football field, runners received their (beautiful!) medals, along with plenty of snacks such as bananas and pretzels. Liquid Death was also on hand to provide water for all the athletes and since the weather was cooler than previously anticipated, multiple volunteers were on hand giving out nylon blankets to anyone who wanted them.

Tips:
- Anticipate all major roads and ramps near the Rose Bowl will be blocked on your trip to the stadium. So plan extra time, and take time the night before to research alternative routes down smaller streets to reach the parking lot.
- After the major hill at mile 2, this course is relatively flat. That being said, it’s not completely flat, so if you’re brand new to running hills, take some time before this race to practice – the small inclines can be deceiving! As the course slopes down toward the Rose Bowl, watch your footing – it’s easy to let gravity carry you away and stumble!
- The course has multiple turnarounds – watch for other runners around you as you take the turns.
- We lucked out with the weather this year, but had we not been so fortunate, this course doesn’t offer a ton of shade. Hope for the best, prepare for the worse and hydrate!

Final Thoughts:
This race is a highlight reel for Pasadena – offering beautiful views, a wonderfully encouraging spectator crowd, and an incredible finish! The course is tame enough for novice half marathoners while still offering a challenge (and numerous rewards) for even the most seasoned runner!